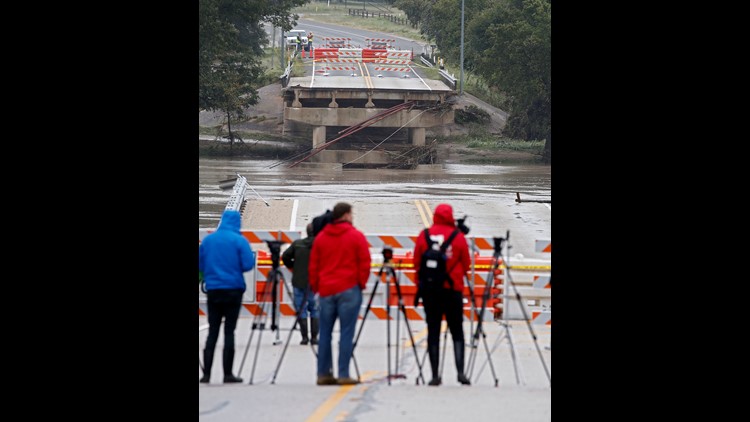 Photo by: LARRY W. SMITH, EPA-EFE
Media line up behind the barricades near where a bridge over the Llano River collapsed from flood waters in Kingsland, Texas, on October 17, 2018. Texas will see more rain this week, while the East Coast will wait until the weekend see rain from a powerful nor'easter.

Hurricane Willa may be gone, but some of its remnant energy and moisture will help fuel the first nor'easter of the season for the East Coast this weekend, the National Weather Service said.

The worst weather will be from from Virginia to Maine. "At this time, it looks like this storm will bring a general 1-2 inches of rain and a period of 40- to 50-mph wind gusts to the coast," according to AccuWeather senior meteorologist Dave Dombek.

Nor'easters – named for the direction from which their winds blow – are most common from fall through the early spring. In the heart of the winter, they can become notorious powerhouse snowstorms, sometimes delivering a crippling blow to the big East Coast cities.

Since it's only October, however, most of the precipitation that falls this weekend will be rain, so snow shovels won't be needed for most folks. Some of the higher elevations of northern New England and the interior Northeast could see some wet snow from the storm.

A weekend nor'easter will likely bring wind-driven rain and coastal flooding to the East Coast and wet snow to the interior Northeast: https://t.co/ZvHpfu91HM pic.twitter.com/zA4No0MC6P

The combination of rain, wind and a low cloud ceiling is also likely to lead to airline delays and slow travel on area highways, AccuWeather said.

Even before the nor'easter lashes the East Coast, the South will see a soggy couple of days as the remnants of Willa merge with other weather systems. After a rainy day Wednesday in waterlogged Texas, the heaviest rain Thursday will be along the Gulf Coast from Mississippi to Florida.

"The downpours will expand eastward along the central Gulf Coast by Wednesday and Thursday, and eventually target areas of the Florida Panhandle and Georgia that were ravaged by powerful Hurricane Michael," AccuWeather meteorologist Kyle Elliott said.

Early Wednesday, Hurricane Willa weakened rapidly into a tropical depression after slamming into a stretch of beach towns, fishing villages and farms along Mexico’s Pacific coast as a Category 3 storm late Tuesday,

Willa hit the mainland near Isla del Bosque, Mexico, which is about 50 miles southeast of the tourist town of Mazatlan.

The first nor'easter of the season will impact the eastern US this weekend, bringing widespread rain, gusty winds and a bit of snow: https://t.co/OquZMEJTcD pic.twitter.com/VWG89bmAZO