How safe are your social media posts?

Keeping up with Kim Kardashian West's whereabouts isn't difficult if you have a smartphone or access to a computer. 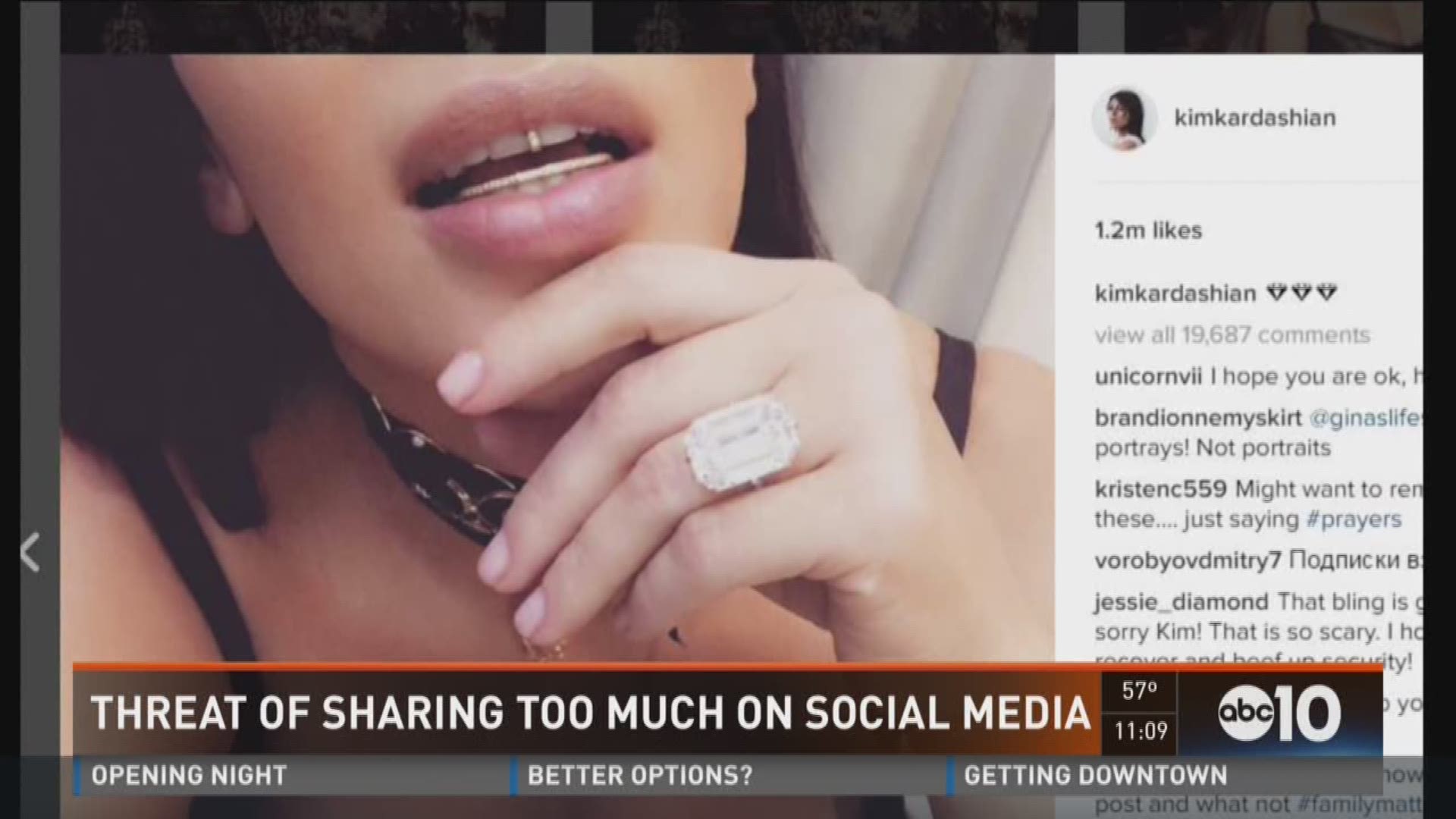 Keeping up with Kim Kardashian West's whereabouts isn't difficult if you have a smartphone or access to a computer.

In fact, the reality star is notorious for inviting millions of fans and social media followers into her luxurious- and many times outrageous- life. Whether adored or hated, Kardashian West's presence is seared in headlines and online every day, in almost every corner of the world.

The star frequently posts her activities on Snapchat, where the majority of her entourage, family and friends make appearances. Kardashian West, wife of rapper Kanye West, is a high-profile fashion icon, who makes it a habit to post millions of dollars worth of jewelry, designer clothes and accessories on social platforms like Instagram and Twitter.

The star may not give the public exact locations or real details about her day-to-day life, but an overall picture can be painted simply by following her on social media.

Kardashian West flew to Paris last week to attend Paris Fashion Week. She posted a series of photos on Instagram while in the city, including one of her wearing a giant, diamond ring and a diamond mouthpiece.

In the early hours of Sunday, Oct 3, the reality star was tied up and robbed at gunpoint in her Paris apartment by two masked men, according to officials. Kardashian West was unharmed, but the thieves, and three other masked accomplices, took off with more than $10 million dollars in jewelry.

The armed men allegedly didn't speak any English, but kept asking Kardashian West for a ring, according to TMZ. She reportedly knew they were referring to the big ring she had posted on Instagram that week, a gift from her husband, and directed the robbers to it.

Could it be possible the armed robbery was tracked or triggered by Kardashian West's social media habits?

While the investigation into the robbery is still underway, and the exact details of what was stolen hasn't emerged, Johanna Primevert, chief spokesperson for the Paris Police Department may have suggested a link in a statement:

"Clearly when you have a star like Kim Kardashian who has, I think, more than 48 million followers on Twitter... I think this could have happened abroad just as easily as in Paris. It was really the celebrity who was targeted, with possessions that had been seen and noticed via social media, and it was these goods that the attackers targeted."

While GPS on your smartphone can be helpful when using services such as maps, it can be potentially dangerous when it's used to geotag a photo or to check into a location. A geotag attaches all location information to a picture. Posting a photo online could reveal everything from your location, to your daily movements.

Sometimes, people aren't aware their Location Services is turned on. A person has to manually turn GPS services off through settings on their phone if they want to opt out of disclosing their locations when posting on social media.

Although Kardashian West and other celebrities normally don't use the geolocation feature on their social networks due to obvious safety reasons, many social media platforms encourage the average user to let others know what they're up to through geotag.

Snapchat, which had 150 million daily users according to a Bloomberg report in June, features a variety of filters that are popular with it's users. Cities, neighborhoods and events can feature their own filter as long as a user's Location Services is turned on.

With location services, a person can make their whereabouts accessible or could even pin their address or where they work- even where they go to the doctor.

In Kardashian West's case, her exact location wasn't posted but her general movements could be tracked- as well as what accessories she was traveling with on her Paris trip.

Sacramento doesn't see any trends of geotagging or social media-related robberies either, according to Matthew McPhail, an officer with the Sacramento Police Department.

He said he's not aware of any cases in Sacramento, but still advised social media users to take caution, and be careful to expose what's in their home.

Just a simple vacation post can alert those watching that you're away from home. Your photo from home can reveal electronic valuables, or even the layout of your home.

Not everyone is a celebrity like Kim Kardashian West, but anyone can be a victim of crime.