A Trader Joe's customer in Phoenix refused to wear a mask while defying employees and store policy. The incident was caught on video. 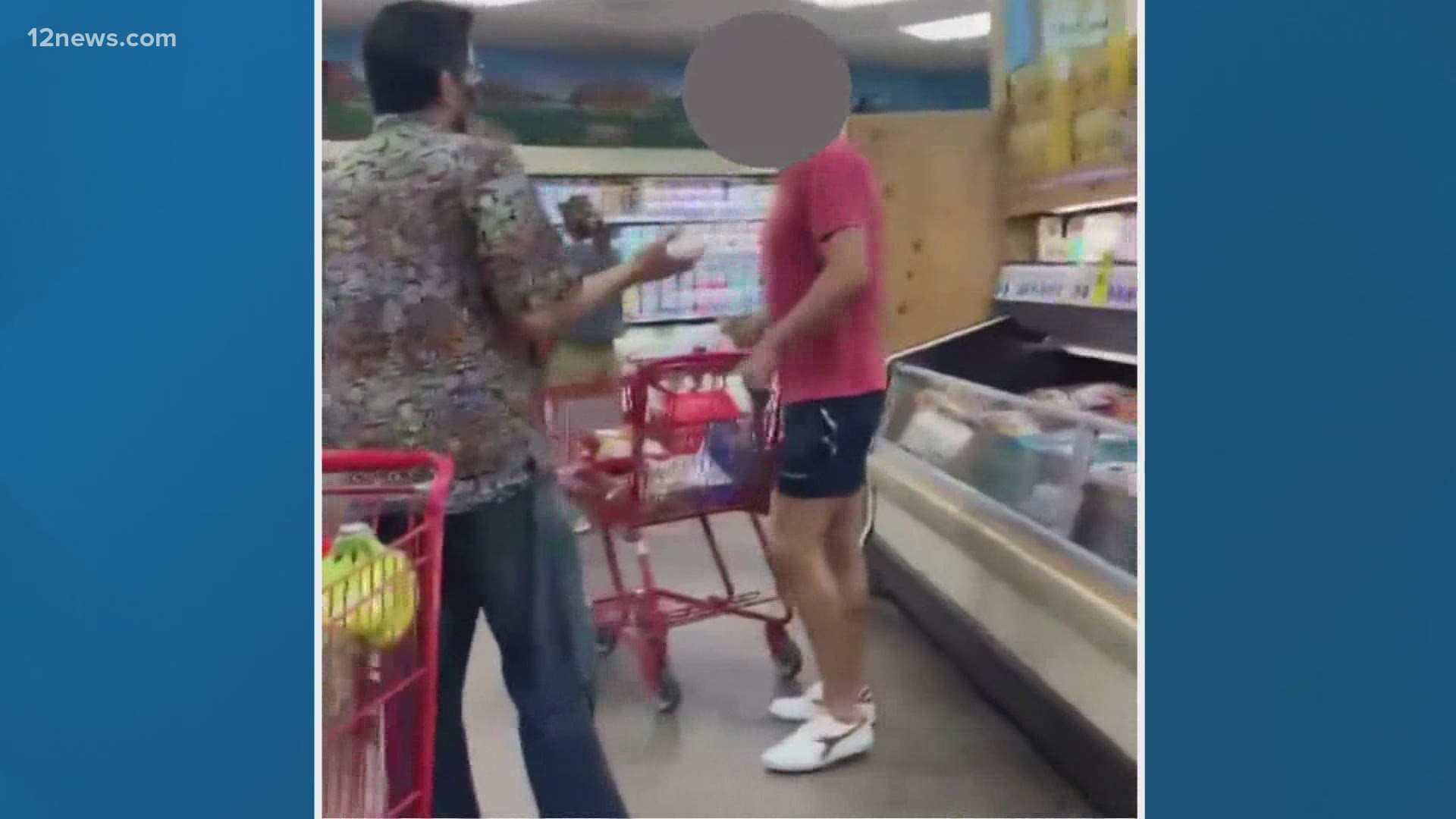 PHOENIX — Gov. Doug Ducey lifted mask-wearing restrictions two weeks ago, passing on the torch to individual and private businesses to set their own COVID-19 restrictions, but the move is now leading to tense interactions when employees tried to mandate face coverings on customers.

The latest documented incident happened at a Trader Joe’s store near 20th Street and Camelback Road when a cell phone video captured by customer Analise Ortiz shows a total of three employees asking a man to wear a mask or leave the store on Tuesday.

Ortiz said she was at the store buying groceries and began recording when she encountered an employee telling a customer to mask up in order to shop there, but the man refused.

“I’m not going to wear a mask. It’s not enforceable,” the unidentified man is heard saying in the video.

That’s when Ortiz says she tried to intervene, along with another woman in the aisle next to her watching the tense encounter unfold.

“The woman told the man, 'You know you could be spreading a deadly disease,'” but Ortiz said the man then walked past both of them and coughed in the woman’s direction.

As the man tried to make his way to the cash register, an employee kept asking him to put on a mask, “It’s only our job, our company asked us to do this.”

The unmasked shopper took out his phone and read what he said was a newspaper article detailing Ducey’s executive action that lifted mask-wearing in the state.

“We’re following the CDC says, not what the governor is saying,” one of the employees is heard saying, to which the stern customer replied saying, “Well this is the governor of the state. CDC doesn’t have any control over him.”

According to Ducey’s lift on COVID-19 restrictions, businesses have the option to issue their own rules on mask-wearing and social distancing. It also allows them to refuse service to anyone who doesn’t comply.

Ducey explained that on Wednesday morning in an interview on KTAR News 92.3 FM.

“When private businesses are asking people to wear a mask, let’s respect the private business and wear a mask. They’re a good idea. Arizonans have been among the leading states in the nation in mask participation and compliance. Let’s keep that up as we move through this,” the Governor said.

Although employees at Trader Joe’s said they would call authorities if the man didn’t follow their request, the maskless shopper made his purchase and left the store without incident.

“I, unfortunately, feel like people have been emboldened by the governor’s decision to repeal the mask mandate to not only act like the pandemic is over but put other people at risk in the process,” said Ortiz.

As the governor said mask-wearing is personal accountability, local leaders say the decision sets back Arizona in the progress and fight against COVID-19.

“I’ve spoken to many business owners who want to do the right thing but don’t know why they have to do it alone,” the release said.

“They’ve been pushed into the position of having to defend their mask policies with no help or backup from local government. That is wrong.”

Ortiz said that although she’s hopeful actions like those of Gallego and other city leaders might help curb the spread of the deadly virus, she says she won’t be surprised if similar encounters intensify.

“If you don’t like it, you need to respect it the same you would respect a no shirt, no shoes, no service policy. It’s that simple,” Ortiz added.