The fire is burning just above Fossil Creek and the Verde River convergence area, officials said. 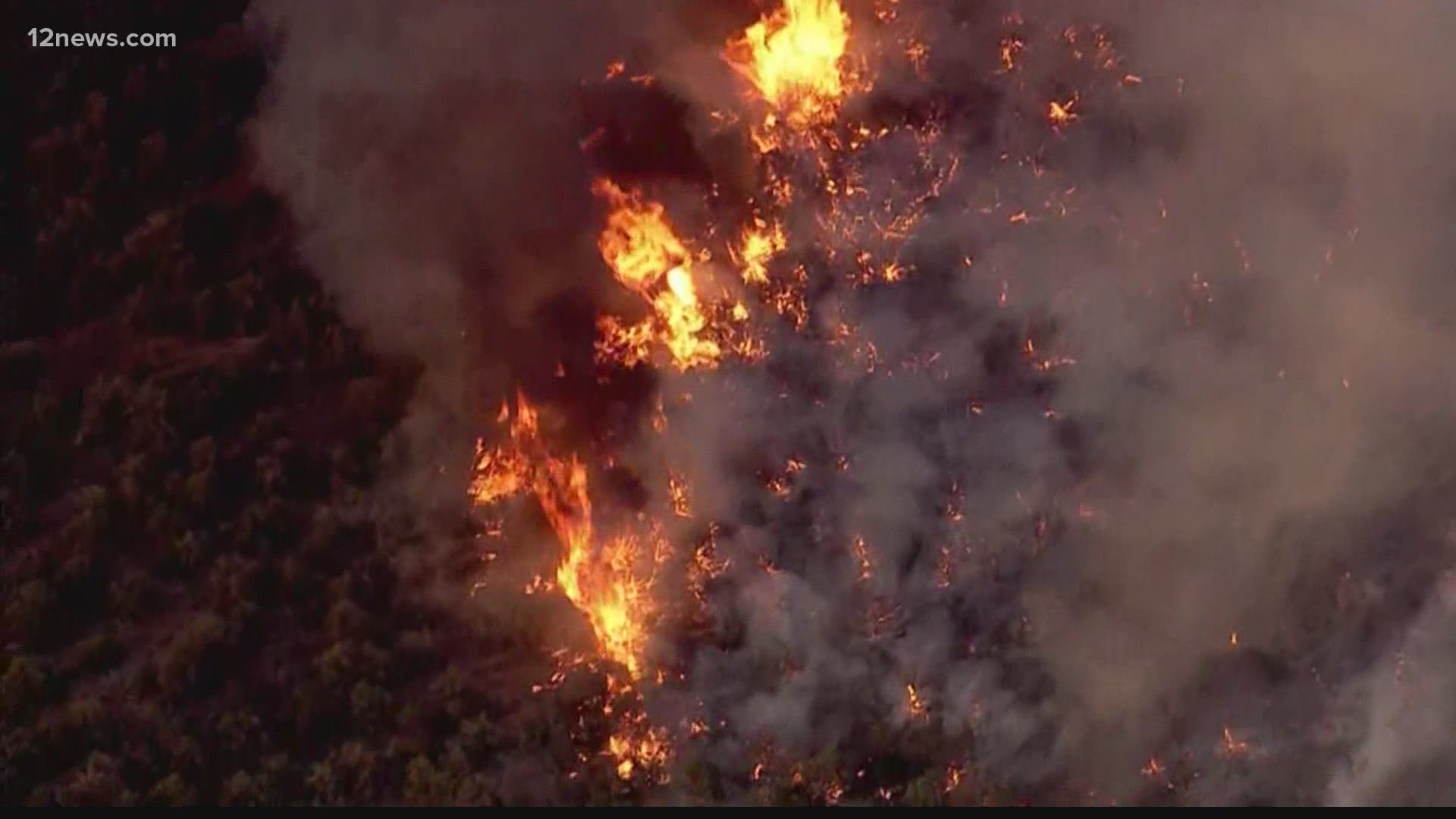 STRAWBERRY, Ariz. — Evacuations have been ordered for residents in Strawberry, Hunt Ranch, and Pine due to the Backbone Fire that began on June 16. The fire reportedly started due to lightning.

The wildfire has burned more than 32,757 acres and is 0% contained as of Monday morning, fire officials said.

The fire is burning just above Fossil Creek and the Verde River convergence area, officials said. The fire is considered very active and is burning dry brush and grass.

Around 332 fire personnel are assigned to the fire. Air resources are being used to fight this wildfire due to the extreme terrain and limited access.

Current efforts are working toward keeping the fire to the east of the Verde River, according to fire officials.

Residents of Camp Verde are close enough to see heavy smoke as winds push to the south.

There have not been reports of any structures lost as of Sunday evening.

For updates and to ask questions, visit the Backbone Fire community Facebook page.

Live update on the Backbone fire from Camp Verde, AZ.

Hundreds of people evacuating those areas were pushed into Payson on Friday night. Several evacuees told 12 News that lodging was mostly booked up.

She and her pups evacuated on short notice from their home in Strawberry.  A few hours later, she was in a parking lot in Payson Friday night, waiting for a neighbor to bring her family's RV to drive down to the Valley.

"Hope I have a house left," she said.

#BACKBONEFIRE: Just spoke with Strawberry neighbors and a couple from Pine all waiting out the flames at the Payson Rodeo grounds.

Everyone is in good spirits but also anxious. Heidi learned of the fire while she was in Tampa and evacuated as soon as she landed. @12News https://t.co/hNdTUWsiNq pic.twitter.com/HuQhQS6KWz

Her son is on the incident command team battling the inferno. So far the #BackboneFire has burned more than 17k acres in 24 hrs and is still 0% contained. @12News

The Red Cross has set up a shelter at Rim Country Middle School.

The Payson Event Center has been set up to take livestock and the Coconino Humane Society has been prepared to take horses. Dogs and cats will be cared for at the Humane Society of Central Arizona.

According to officials, there are about 60 people in the evacuation centers.

MORE FROM PAYSON: Strawberry valley resident Terry Krider and his partner Debbie Walker saw the black smoke hundreds of feet in the air and red skies from the #BackboneFire as they evacuated.

Now waiting out the flames at the Payson Rodeo grounds. @12News #ArizonaWildFires pic.twitter.com/9JyCwgdA0S

Darlene White is Terry and Debbie’s neighbor. She was an emergency nurse in Detroit for 40 years.

Her husband was taken to the hospital in Payson for heart issues.