The lawsuit alleges three companies filled hundreds of thousands of suspicious orders for opioids that likely ended up in the hands of drug dealers. 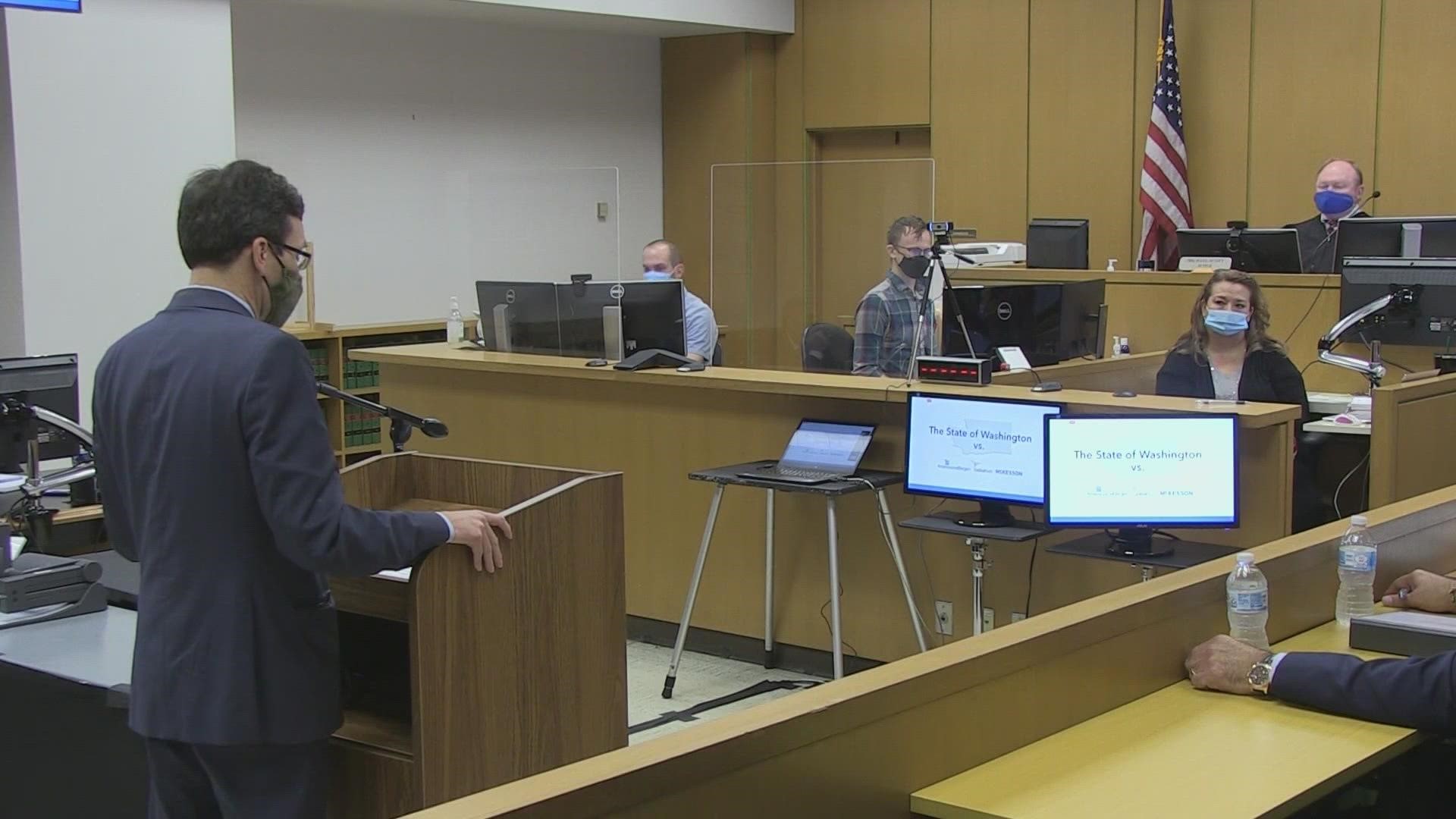 SEATTLE — Washington state went to trial Monday against three major opioid distributors accused of fulfilling hundreds of thousands of suspicious orders for drugs that likely ended up on the black market.

Since 2006, the opioid epidemic has killed more than 10,800 Washington residents. Between 2000 and 2018, opioid-related hospitalizations quadrupled from 5.3 to 20.2 hospitalizations per 100,000 residents, according to state data.

The state alleges three distributors, McKesson, Cardinal Health and AmerisourceBergen, shipped over 250,000 suspicious orders to Washington between 2006 and 2014, despite having a legal obligation not to fulfill orders that would likely end up in the hands of drug dealers.

"As a result, a staggering number of prescription opioids flooded into Washington state in the last several decades," Washington State Attorney General Bob Ferguson said in Q&A about the lawsuit on Wednesday.

Over an eight-year period, the companies sent more than 2 billion opioid pills into the state, Ferguson said.

Ferguson previously rejected a $527 million settlement with the companies over their role in fueling the state's opioid epidemic. He said the settlement wasn't enough "considering the harm that was caused."

Should the lawsuit be successful, Ferguson will ask the court to penalize all three distributors for every time they violated Washington state law and award the state relief money that would be used to fund the state's opioid response plan.

Ferguson wouldn't comment on the exact amount of money the state is seeking from the distributors, only that he believes they need to pay "significantly more." Previously, Ferguson said the state was seeking a "transformative amount of money" to respond to the opioid crisis.

"We believe that the evidence at trial will show the facts, the law and the equities here, require these three defendants to clean up the terrible tragic crisis that we allege they fueled in our state," Ferguson said. "So we’re looking forward to walking into a Washington state courtroom to hold these companies accountable for their conduct. Washington families devastated by the opioid epidemic deserve their day in court and that day comes Monday."

The trial is set to last three months, with opening statements to begin on Nov. 15 at 9 a.m. The prosecution and the defense will each get six weeks to present their argument. The trial will be streamed live on YouTube.

Washington is set to be the first state in the country to take all three distributors to a trial where a decision will be reached by a jury or judge, Ferguson said. Several other states have reached settlements with the distributors.