Is Gov. Ducey keeping his promises to Arizona schools?

We looked at two of the top items on the governor's January to-do list for schools: raising teacher pay and easing the teacher shortage. 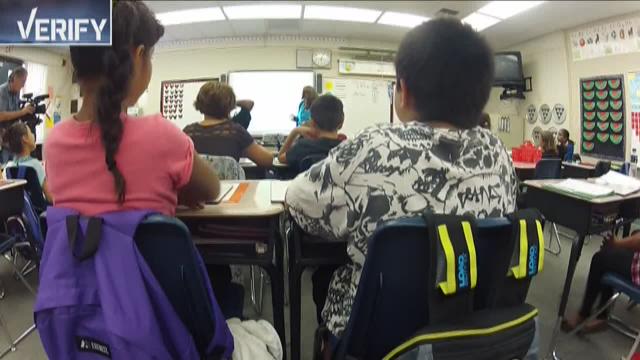 We gave 12 News viewers a choice Wednesday of three topics to verify on Wednesday's newscast.

You overwhelmingly voted for education: Is Gov. Doug Ducey following through on his promise to improve Arizona schools?

Back in January, Ducey made a show of laying out Steps 4 through 18 on education in his "State of the State" speech.

Education advocates had been pressing Ducey for Steps 4, 5, and 6 to show his commitment to schools, after they backed his Prop 123, the school-funding measure voters approved last year.

We looked at two of the top items on the governor's January to-do list for schools: raising teacher pay and easing the teacher shortage.

We also included the most controversial bill he fought for -- the school voucher expansion. That bill wasn't one of the 15 new steps in January.

The governor promised "a permanent, lasting salary increase" for teachers.

What he delivered was a 2 percent raise stretched out over five years -- less than five bucks a week in the first year.

As public-school advocates heaped ridicule on the governor's proposed raises, the Republican Legislature bumped them up to 2 percent over two years. That is where the raises stand as the Legislature debates the state budget this week.

Verify: The governor's proposed raise was too stingy even for lawmakers in his own party.

Doug Ducey's idea to ease the teacher shortage was to lower state standards to become a teacher.

"We want the most qualified, most talented people leading our classrooms," Ducey told lawmakers in January.

Ducey wanted to open the classroom to people who've never been trained as teachers. It fit neatly with his legislative agenda of lowering or eliminating barriers to entry in fields such as cosmetology.

Education advocates told me Ducey was fixing the wrong problem.

"The main issue driving teacher recruitment and retention in Arizona is not how hard it is to become a teacher," said Chris Kotterman of the Arizona School Boards Association.

Verify: The governor signed the bill into law, over the opposition of Republican School Superintendent Diane Douglas, who oversees teacher certification. The bill's potential impact on easing the teacher shortage is unclear.

The most controversial education bill this year -- the school vouchers expansion -- wasn't one of Ducey's 15 new steps to improve education.

Polls have shown little public support for expanding the use of taxpayer dollars to send children to private or religious schools. But next fall, 5,000 Arizona parents will have that opportunity; the program will open to more parents in coming years before it hits a cap.

The bill passed by just one vote in the House and the Senate, after Ducey strong-armed Republican lawmakers. The governor signed it later that night at his Paradise Valley home.

The bill's passage was hailed by the school-choice insiders in Arizona and Washington, D.C.

But Ducey was publicly embarrassed when the six most recent Arizona teachers of the year accused him of betraying them after they had backed his Prop 123.

Verify: Ducey got the expansion, but the political price was high. An independent analysis said the expansion would save taxpayer money, with the caveat that the hastily worked-up estimate was "highly speculative."

The conservative Goldwater Institute, which has lobbied for vouchers for more than a decade, has vowed to get the cap lifted.