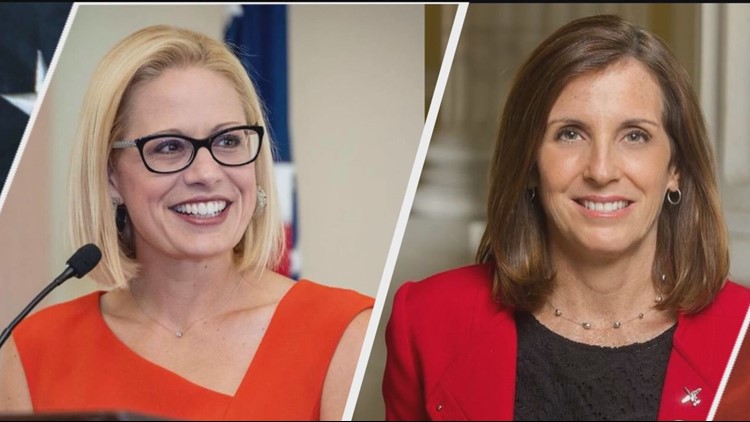 Photo by: 12 News
Both Congresswomen Martha McSally and Kyrsten Sinema have seen their fair share of attack ads as they compete to take Jeff Flake's seat in the US Senate.

Did Sinema commit treason when she said she was 'OK' if an American joined the Taliban?

According to U.S. code, "Whoever, owing allegiance to the United States, levies war against them or adheres to their enemies, giving them aid and comfort within the United States or elsewhere, is guilty of treason and shall suffer death, or shall be imprisoned not less than five years."
Author: Michael Doudna
Published: 6:24 PM MST October 16, 2018
Updated: 8:48 AM MST October 17, 2018

The two sides made plenty of claims allegations and denials over the hour. The debate stage really was just a new platform to continue the two sides’ attacks against each other.

Near the end of the debate, Congresswoman Martha McSally called for an apology from Rep. Kyrsten Sinema for comments she made in a radio interview with a Libertarian talk show host back in 2003.

The host of the show said, “as an individual, and I want go and fight with the Taliban army, I go over there and fight in the Taliban, then that’s a personal decision," to which Sinema responded, “Fine I’m OK with that."

“While she was on the radio you said it was ok for Americans to join the Taliban and fight against us.” McSally said “I want to ask right now if you’re going to apologize to the troops and me, saying it was OK to commit treason.”

Rep. Sinema responded saying “Marth has chosen to run a campaign like the one you are seeing right now.”

After the debate, reporters asked Rep. McSally to clarify if she was accusing Rep. Sinema of treason.

“This is the definition of treason. Saying it’s OK for Americans to join our enemy.” Rep. Martha McSally said

Her campaign released this statement Tuesday.

"To go fight for the enemy is treason, and Kyrsten Sinema said she was okay with that. Martha McSally ACTUALLY FOUGHT the Taliban, and Martha is extremely disturbed at the thought that Kyrsten Sinema would be okay with Americans going to fight for the enemy. Kyrsten has still refused to apologize to Martha and Martha's fellow service members for her comments." -Torrun Sinclair, communication director for McSally for Senate.

After the debate, Congresswoman Sinema called the claim that she encouraged people to join the Taliban "ridiculous"

A statement from the Sinema campaign said Tuesday:

"Congresswoman McSally crossed the line with that desperate attack - all to distract from her lies about voting to take away protections from Arizonans living with pre-existing conditions. Unfortunately, this is the kind of campaign Congresswoman McSally has chosen to run and it's exactly why Arizonans don't trust her."

According to U.S. code, "Whoever, owing allegiance to the United States, levies war against them or adheres to their enemies, giving them aid and comfort within the United States or elsewhere, is guilty of treason and shall suffer death, or shall be imprisoned not less than five years."

The interview from 15 years ago would fall short of that standard.

Rep. Sinema attacked her fellow lawmaker on healthcare, claiming Rep. McSally voted to remove protections away from those with pre-existing conditions.

The claim is based on the 2017 vote to repeal the Affordable Care Act, also known as Obamacare.The plan would have been replaced by the American Health Care Act (AHCA), if it were not for the legislation dying in the Senate.

The version of the AHCA would have required those with pre-existing conditions to be offered health insurance, but would have removed the ACA cap on how much could be charged, removing a major protection of the plan. The AHCA would allow states to put their own cap on how much a company could charge, but could cause those with pre-existing conditions, especially those who saw a lapse in their coverage, pay much higher premiums. However, the plan never went into effect.