Daughter said her mom was trapped inside the area for almost an hour until helped arrive to free her.

PHOENIX — As COVID-19 cases surged in Arizona, Gov. Doug Ducey issued a new round of executive orders that includes closing bars, movie theaters and gyms, along with water and tubing parks through July 27.

The order went into effect at 8:00 p.m. Monday evening. The order did not include private pools or apartment complex pools but did say gathering should be limited to 10 people or less and signs should be visible at pools.

Sharon Jones, 72, lives at Sedona Ridge Apartments and depends on water therapy for arthritis. She said she headed to the complex pool Monday evening to get her water aerobics finished before the order went into effect.

"She was going swimming around 4:30 [Monday evening] and then she texted me at 5:05 p.m. and said, they're trying to close the pool. And they're putting chains on the doors," said Margaret Poling, Jones' daughter.  "And then she didn't respond to any of my messages."

Poling said she kept calling her mom and when she couldn't get her on the phone, she was so concerned, she and her husband headed to the pool to check.

"When we were just about there, she ended up answering her phone, and she told me that they had locked her in," said Poling.

When police and her husband arrived, they found Jones trapped inside the pool area.

Jones said when the maintenance man approached her about closing the pool, she explained to him the order didn't go into effect for a few more hours and she wanted to finish her exercise.

"He didn't request that she get out of the pool. He didn't say anything further or argue he just what she thought was left," said Poling. "She knew he had chained one gate but  was unaware they had changed the other until she did some lapses in water and aerobics."

That's when she got out of the pool and discovered she was trapped. 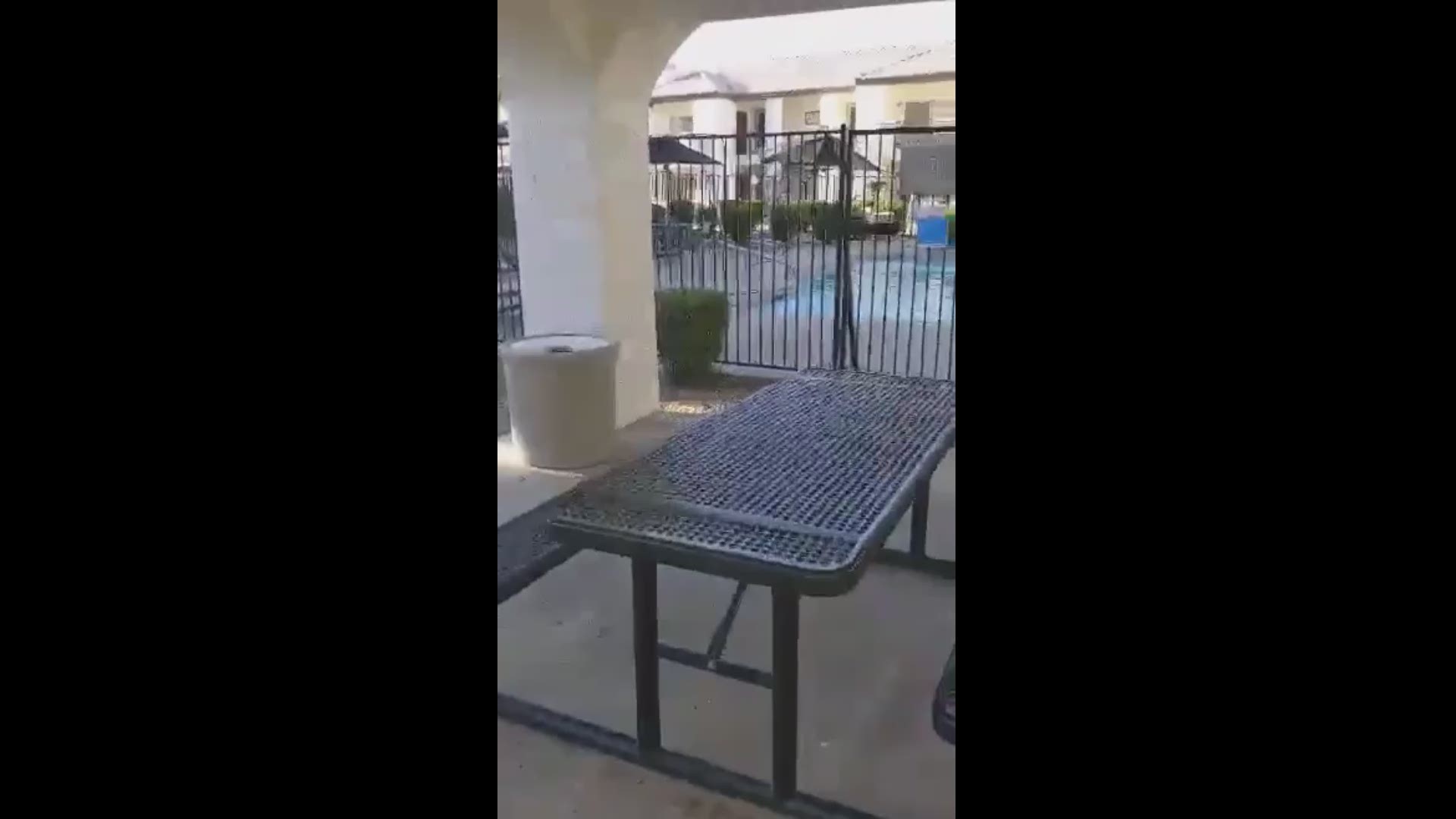 Poling's husband was able to help free his mother-in-law from the pool area but it was not an easy task and he said it would have been impossible to get out from inside without assistance.

"So my mom would not have been able to do it herself, even though she was a young woman, but especially not as a 72-year-old," said Poling. "So she was out there for almost an hour before I showed up...we immediately called the police."

"When the police showed up, they did document they saw the padlocks and the chains on the fences...they said that because they don't have the name of the man who actually locked her in, there was no charge that could be pressed at the time," said Poling. "They urged us to try to call the complex during business hours and ask for the man's name so we could update the police report and hopefully file charges."

Poling said she reached out to the complex Monday evening and several times throughout the day Tuesday with no luck.

Jones told her daughter she is now worried about retaliation but doesn't want this to happen to anyone else so she is sharing her story.

"The other thing that's really difficult is it almost seems like apartment complexes and landlords are above the law because they hold your home in their hands," said Poling. "They can tell you to leave, they can leave you homeless, basically, if you upset them, or if they don't like what you do...my mom even said yesterday, [Monday] since I'm on a month to month lease right now, they'll probably evict me for this."

Poling said she and her mother decided the risk of eviction is worth speaking out. "I can't, in good faith, allow my mom to be treated this way," she added. "I also can't imagine letting this go on and letting someone else's child, parent or grandparent be treated the way that my mom was treated."

12 News contacted the office of the apartment complex to request an interview about the alleged incident, and we were told they have nothing to say about the incident.

We also contacted Sares-Regis, another company associated with the complex, and they released the following statement.

"We have investigated this claim that someone was locked in the pool area and determined that the claims were factually inaccurate. While it is true that a resident refused to leave the pool area when asked to do so based upon the Governor's Executive Order and the need to immediately review the company policies to ensure that they complied with the current Executive Order. Additionally, it is true that one of the two gates in that pool area was locked, at all times that resident was able to use the other gate as evidenced by the witnesses that observed her key being used to unlock that other gate when she left the area. Additionally, the claim that no staff member was available or responded has also been proven to be false as evidenced by the multiple witnesses that were in the office at the time of the alleged event."

The Phoenix Police Department confirms they responded to this incident and the information on the report matches the version of events laid out by Poling and Jones.

ALSO: Harvard study: Arizona is thousands of tests behind what is needed to 'mitigate' the spread of coronavirus

MORE: Coronavirus in Arizona on July 1: Cases, deaths on the rise