Officer Christopher Farrar was killed early Friday morning when a suspect struck and killed him with a stolen vehicle, police say. 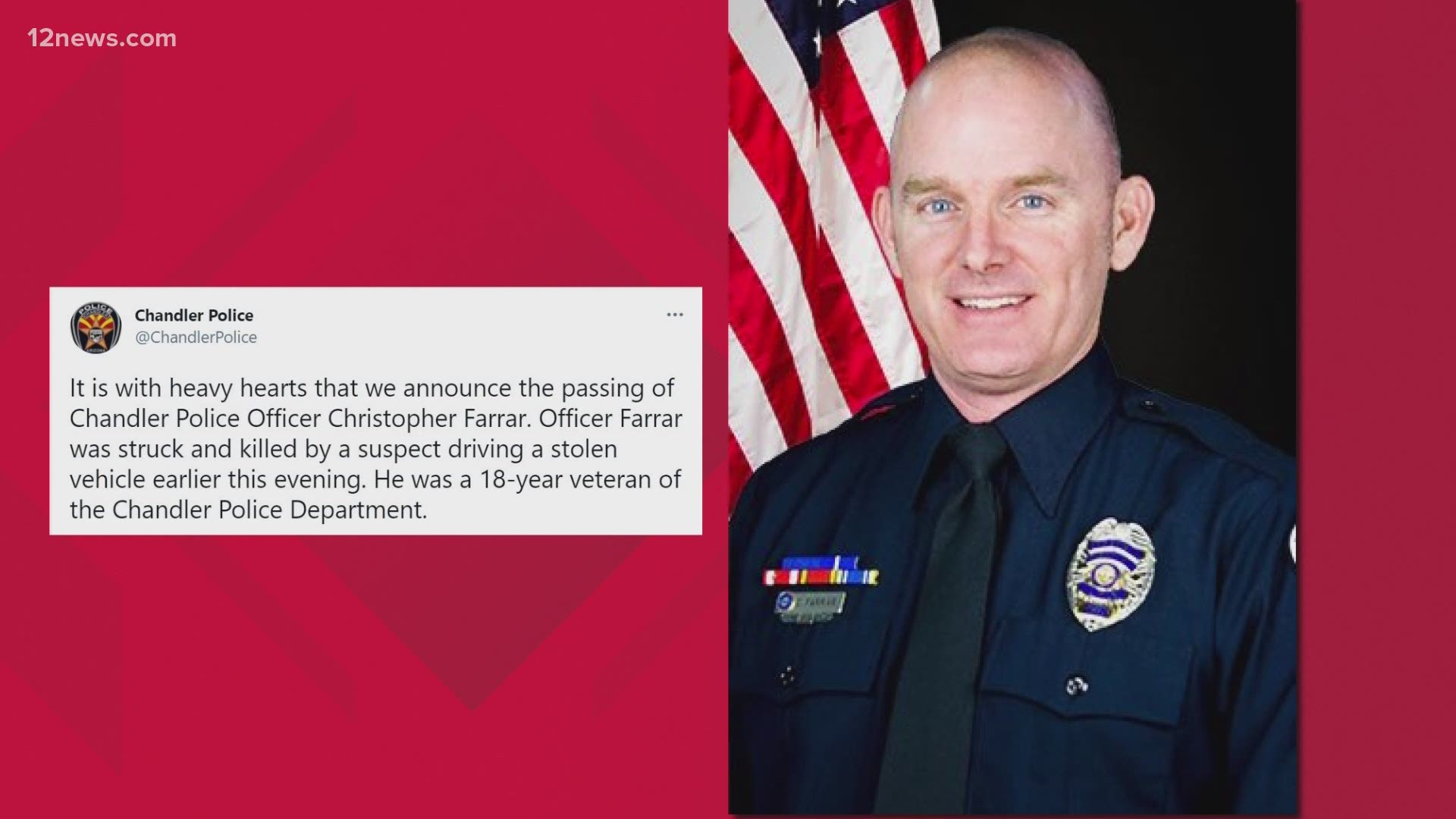 CHANDLER, Ariz. — A candlelight vigil has been planned for fallen Chandler Police Officer Christopher Farrar after the 18-year veteran of the department was struck and killed by a suspect in a stolen vehicle following a lengthy pursuit early Friday morning.

The vigil planned by Compass Christian Church in Chandler will be held on Saturday, May 1 at 7 p.m. on the campus of the church, located at 1825 South Alma School Road. The public is invited to attend.

Farrar was one of the officers who responded to a Ford dealership in Gilbert early Friday morning as multiple agencies searched for a suspect on the run.

According to information from police, the suspect started a police pursuit in Eloy, Arizona, on Thursday night after failing to stop when being pulled over for speeding. The chase led to the Chandler Airport, before the suspect drove the wrong way on the Loop 202 and crashed his vehicle near the Val Vista Drive on-ramp.

The suspect fled on foot to a nearby dealership and then stole a vehicle while officers from multiple agencies surrounded the building. The suspect struck multiple officers when trying to flee before he was taken into custody.

Farrar was killed and Gilbert police officer Rico Aranda was severely injured and rushed to the hospital in critical condition. A dealership employee and multiple DPS troopers were also injured in the incident, but have non-life threatening injuries according to police.

It is with heavy hearts that we announce the passing of Chandler Police Officer Christopher Farrar. Officer Farrar was struck and killed by a suspect driving a stolen vehicle earlier this evening. He was a 18-year veteran of the Chandler Police Department. pic.twitter.com/msQ19LT70L

Chandler PD said Farrar held multiple positions throughout his career, including the patrol division, the bicycle team, and his current position as a K-9 Officer.

The department says he received numerous commendations and accolades from community members, business owners, co-workers, and supervisors during his career. He was a recipient of the Medal of Honor in 2004, the Community Service Award in 2009, the Spotlight Award in 2019, and a four-time recipient of the Lifesaving Award.

"Farrar is survived by his mother and father, brother, sister, daughter, two sons, and grandchild. He was a son, brother, father, uncle, grandfather, and dedicated Police Officer," the department wrote.