After a domestic violence suspect refused to put down his 1-year-old while arguing with Tempe officers, the man was tased. Tempe PD says the child was not injured. 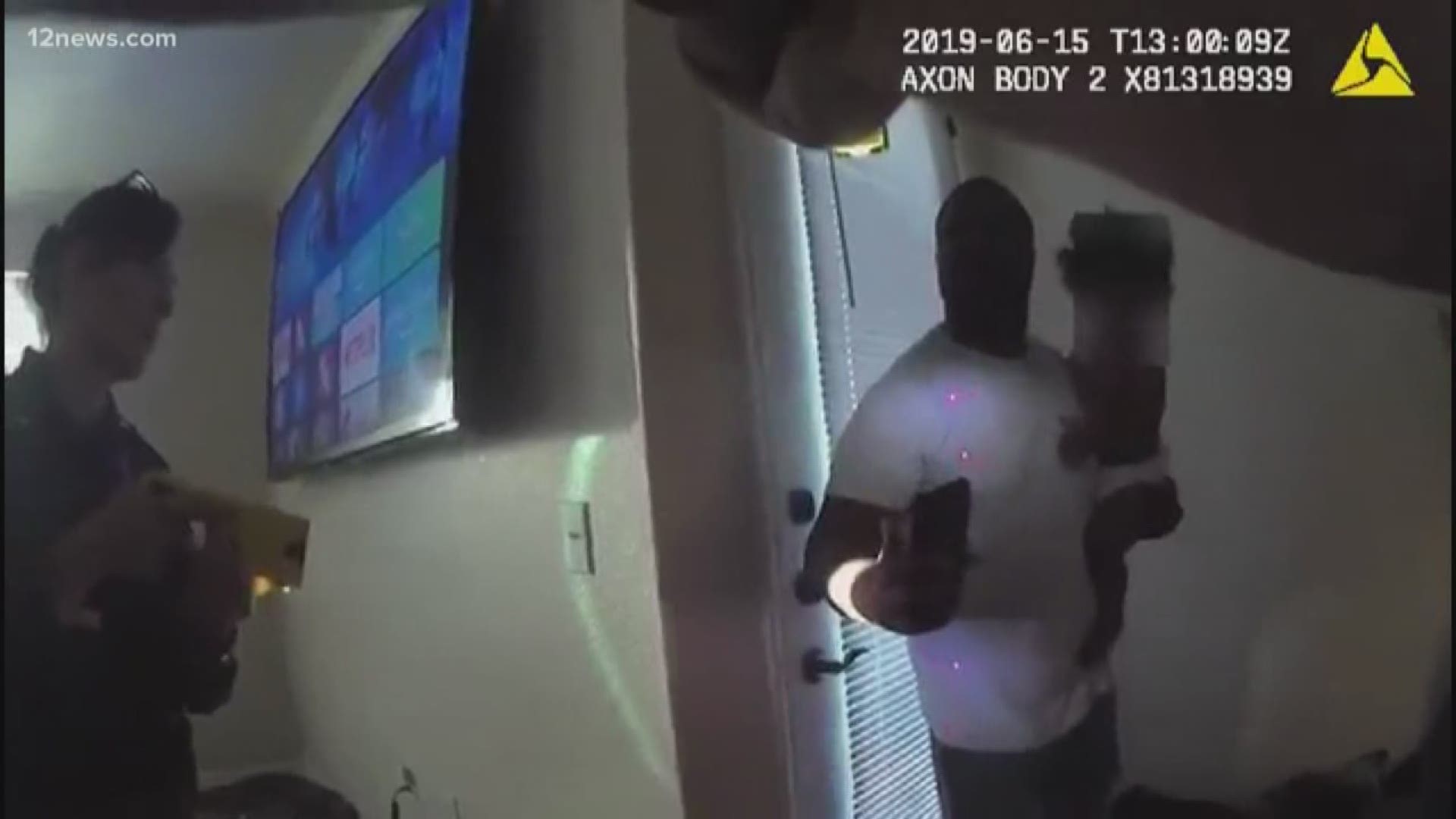 The body cam video posted to YouTube does not come from Tempe Police directly, but the department confirmed the incident through a statement.

According to police, on June 15, police responded to a call near Elliot Road and Hardy Drive for a domestic violence incident involving Ivaughn Oakry.

Police say officers had a lawful right to enter the home for the domestic violence investigation.

Oakry became verbally combative with officers inside the home, according to police.

"During this time, Oakry committed endangerment by picking up his one-year-old child who walked up to him and refused to put the child down," Tempe PD says in a statement.

Officers are heard on the body cam video asking Oakry to put down his child before they tase him.

"You need to drop the kid, I don't want your baby to get hurt," one officer says.

As officers tried to remove the child from his arms, he pulled away.

"Officers on scene decided to deploy their tasers on Oakry on the opposite side of his body from where he was holding his child. When officers deployed their tasers and hit Oakry, he fell onto a pile of clothing in trash bags while holding the child," according to Tempe PD.

Officers retrieved the child and brought the child to his mother, police say.

"The child was not injured and there was no evidence of the child being struck with the taser probes," the statement from Tempe PD says.

Heather Hamel, of The People's Law Firm, and representing Oakry, responded to Tempe PD's statement and says the department's claim the child was not injured lacks credibility.

"Because Mr. Oakry and his one-year-old son had skin-to-skin contact, if any part of the child was touching Mr. Oakry between any of the six locations where the taser probes impacted him, the electricity from the taser would pass through Mr. Oakry’s body and into the body of his infant child," Hamel said in a statement.

Tempe Police Chief Sylvia Moir denied this statement during a press conference, Tuesday. She said a taser's electricity isn't known to pass through one person to another in this way.

During the press conference, the body camera video was slowed down and police say it shows the lasers from the taser were pointed away from the child.

Hamel also denies the claim that Tempe officers had the right to enter the property.

Hamel said all charges filed against Oakry were dismissed.

"As there was no evidence to support them, all charges dismissed by city prosecutors," Hamel said.

Moir said the victim in the case chose not to cooperate with prosecutors and the case could not move forward.

Tempe PD says after reviewing the incident they have assigned mandatory re-training in contact communication; defensive tactics; and enhanced de-escalation techniques to all officers involved in the situation.

The review by the department determined there was no use of force violations that were committed during this incident, according to their statement.

You can watch the body cam video from the incident, put on YouTube by "Renaissance the Poet" below: