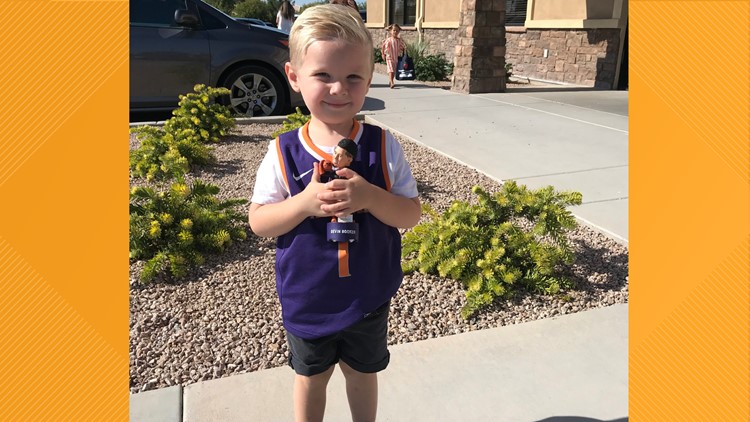 Photo by: Owen's father/Twitter
Three-year-old Owen is ready for show-and-tell with his Devin Booker bobblehead.

This week, the preschooler had something very special to share with his class for show-and-tell day -- his Devin Booker bobblehead.

"He says he likes Devin Booker because he’s so nice, he shoots it really far and makes good baskets," Noah said.

Noah tweeted a photo of him wearing a Suns jersey, holding his Booker bobblehead close, as he prepared for show-and-tell.

Noah wrote on Twitter, "Hey, @DevinBook! My little guy insisted on taking his bobblehead to preschool for show and tell. He asked me to send you a picture so here you go."

Owen told his class Booker is like a superhero, he compares him to Spiderman.

And his admiration didn't go unnoticed. The NBA star responded to Noah's tweet with a show-and-tell memory of his own.

He wrote, "I remember I brought a @ripcityhamilton player card for mine! Tell little man I appreciate him introducing me to his class."

"He says he was happy Booker saw his picture of him and his bobblehead. After he saw Booker “texted” back about the picture he asked if we could call him. He thinks I have his number," Noah said.

RELATED: The Disabled List: Hanna Tucker talks modeling and that viral Suns moment with her brother

The Twitter exchange was quickly shared and commented on. Booker's retweet had nearly 5,000 likes and more than 300 comments.

Many fans were enamored by the adorable Owen and his love for his hometown team and players.

The Suns organization even tweeted Owen and his dad will be enjoying a game on them this season.