U.S. deports husband of soldier killed in 2010, allows him back days later

Jose Gonzalez was arrested and deported last week, even though his wife was killed in action in Afghanistan in 2010. He was allowed to return to Arizona on Monday. 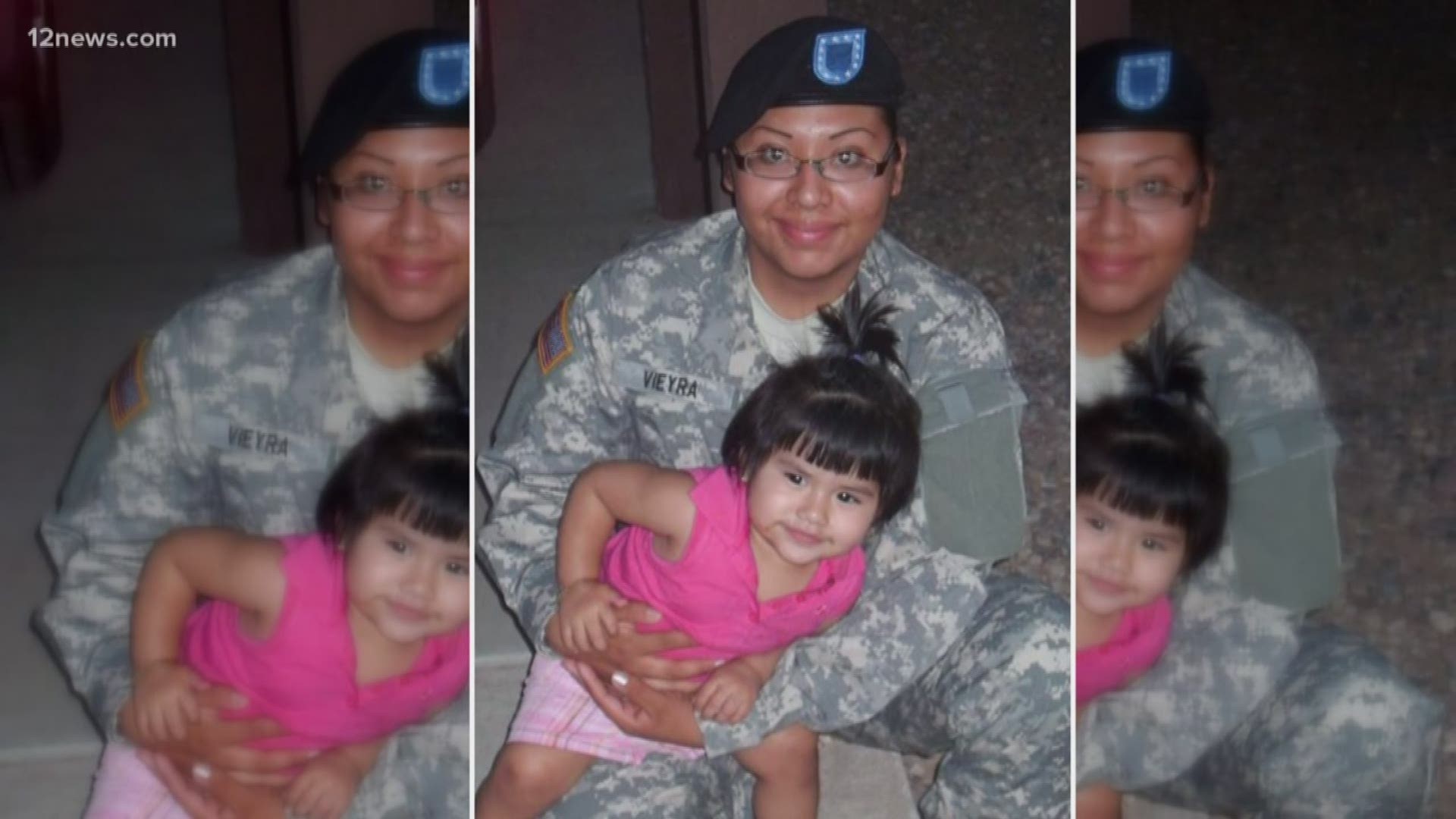 PHOENIX — Jose Arturo Gonzalez Carranza had no idea what was going on when he was driving to work on what he thought was a typical Monday morning.

All of a sudden he was pulled out of his car, slammed up against a truck and handcuffed.

Gonzalez didn't even realize it was Immigration and Customs Enforcement until he got to the building on Central Avenue, where an agent told him he would be deported to Mexico.

Gonzalez, 30, is a military widower. His wife, Barbara Vieyra was killed at age 22 on Sept. 18, 2010, while serving in the U.S. Army in Afghanistan. She was killed on Gonzalez's birthday.

The two have a daughter, now 12 years old, who Gonzalez shares custody of along with Vieyra's parents.

According to Gonzalez's immigration attorney, Ezequiel Hernandez, the couple did not yet file for paperwork to get his green card when Vieyra was still alive, and Gonzalez was late in getting information about surviving spouses of military personnel after her death.

Hernandez and Gonzalez then filed and were granted something called "parole in place," which would allow lawful presence for Gonzalez in the U.S. without having to worry about being deported.

According to Hernandez, ICE refiled a deportation case against Gonzalez in 2018 and filed what's called a "notice to appear" with the court, which allowed the court to issue a court date for Gonzalez where he would be required to appear.

Gonzalez says he was never notified.

“I never received any kind of paper," Gonzalez said. "The first time this happened, the judge gave me an opportunity to be a United States legal and I do my best. I never missed anything, any kind of information, any kind of paper, any time I needed to be in front of an immigration judge, I was always there. I’ll always be on time to renew my permits, everything. But I never received anything to tell me I have a new hearing."

Because he didn't appear in court in December, ICE deported Gonzalez last Wednesday.

“Thursday morning I wake up in Mexico," Gonzalez said. "What’s going on? What am I doing here? Why am I here? I can’t explain what my feelings were when I crossed the border.”

Hernandez said one of the hardest parts about the last 24 hours was Gonzalez calling him and asking if he’ll be able to see his daughter again and other questions Hernandez said he didn’t have answers to.

ICE issued a statement to 12 News Tuesday, saying that the deportation happened.

Hernandez said ICE was at fault for not properly notifying Gonzalez about a court date. The attorney filed a motion to reopen with the court, citing a lack of communication and other errors by ICE.

“Whether it was an oversight, we’ll never know but I think from filing that second notice to appear with the court, I think the errors are clear, as we demonstrated in the motion to reopen," Hernandez said.

On Monday, Gonzalez was told to go to the border and he was processed and allowed back into the U.S. He returned to Phoenix Monday afternoon.

Next, the court has to rule on Hernandez's motion to reopen, ruling whether or not the court agrees that ICE made errors. If the court agrees, the case will be reopened and Hernandez and Gonzalez will have to terminate the deportation proceedings again.

“As it stands, [being a widower of an American soldier] is not enough to have legal permanent status in the United States," Hernandez said.

This story was updated on April 17 to include a statement from a Vieyra family member and ICE.