12 News' Brahm Resnik went to ASU's Tempe campus and asked any student willing to sit down about the serious topic of sexual assault. 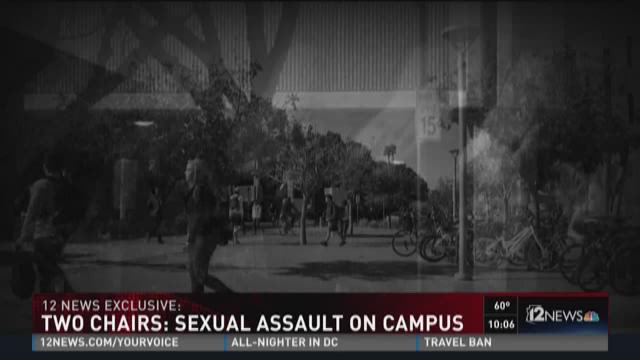 TEMPE, Ariz. - Parents making a college visit with a child this spring will likely see campus-wide campaigns against sexual assault.

The numbers tell us sexual assault on campus is growing -- even as universities and their students learn more about how to prevent it. Sexual violence remains one of the most underreported crimes.

Resources for sexual assault victims For those who have been assaulted or fear they will be, these resources can help. If you are in immediate danger, call 911. • ASU Sexual Violence Awareness and Response
• ASU Police Department
• City of Phoenix Family Advocacy Center
• Arizona Coalition to End Sexual & Domestic Violence
• A New Leaf advocacy center

In just the last few years, Arizona State University has expanded its campaign, including online tests for freshmen.

Colleges are under pressure from the U.S. Department of Education to act.

The feds are now investigating 225 universities for their handling of sexual violence cases.

ASU is the only Arizona university under the microscope. Three assault cases in Tempe -- the most recent one last Dec. 29 -- are being reviewed by the U-S Department of Education.

We went to ASU to find out what students know about sexual assault, for a segment called "Two Chairs."

The idea is simple: Put out two chairs and an "Interviews" sign, and let passers-by sit down on their own to tell us their stories. We were at ASU's Tempe campus for several hours.

Here’s what they said:

"When we sign up they make us take a course ... over how many people get sexually assaulted. How to prevent it and stuff. But I feel like the majority of people don't really take that seriously. They just breeze through as fast as you can. Because we're in college. We're trying to do things. Being online, taking a quiz, is the last thing most people want to do."

I remember talking to some people about 'drunk consent.' Can you still have sex if you're drunk? Because people were very confused over that.

People should stop trying to bury it under the rug... It's an embarrassing issue ... we need to change (our) culture. But I think that we can move forward and make great social change through little acts. So, whether that be, you know seeing a girl at a party or maybe asking her if she needs to go home, or seeing somebody being creepy, getting him away from her.

We tell them when they get their pledge (in our fraternity), if you disrespect or act weird or creepy -- any way towards a girl, you are immediately dropped. We do not allow that at all. We have dropped kids and kicked them out of the fraternity because they are acting weird and creepy.

ASU houses its sexual assault prevention and reporting resources at its Sexual Violence Awareness and Response webpage. The Arizona Department of Public Safety also has a list of resources on its website. The ASU Police Department is available 24 hours a day at 480-965-3456.