Twins fiddling their way to pest control success, or maybe it's the other way around

Jason and Jeff Linford and identical twins from Mesa who are using their musical talents to sell pest control. 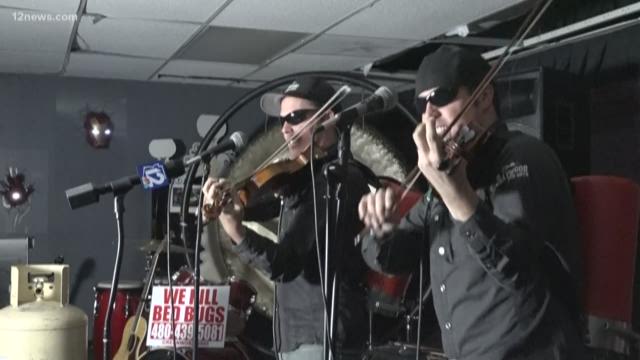 MESA, Ariz. - If these fiddlers are on a roof, it's probably because the house has bugs. Jason and Jeff Linford and identical twins from Mesa who are using their musical talents to sell pest control.

"There's always a funny story about bugs, and then we bring our violins, and they're like, 'This is so original,'" Jeff said from the brothers' studio, which also doubles as a home base for their Hollywood Bug Guys extermination business.

"We've been stung by insects, scorpions," Jason said. It's all part of the gig which is now giving them a leg up in the entertainment industry. "The irony is that pest control is what's opened all the music doors for us," Jason says.

The two decided to start selling pest control more than a decade ago in college. The music industry was proving tough to crack, and this business was a much more practical idea. "

If I had to bet on cockroaches or YouTube, I'm betting on the cockroaches," Jeff said.

Oddly enough, the two are mutually beneficial. These brothers who attended Mesa High School bring their violins door to door when selling their product, a great ice-breaker for sales.

At the same rate, their act as the Hollywood Bug Guys is getting them gigs on ABC's "The Gong Show," and a short appearance on "America's Got Talent."

The business is also now getting them looks at another aspect of the entertainment industry. The Linfords say they are in talks with multiple companies to start a reality show about their "dueling" business ventures.

"We're trying to catch a rattlesnake and at the same time trying to remember that beat," Jeff said.

The uniqueness of their success is proving that "starving artists" can make a living on side jobs, as long as they work together.