Mountainside Fitness CEO Tom Hatten said his gyms will remain open as they await the decision on a lawsuit filed against Gov. Doug Ducey. 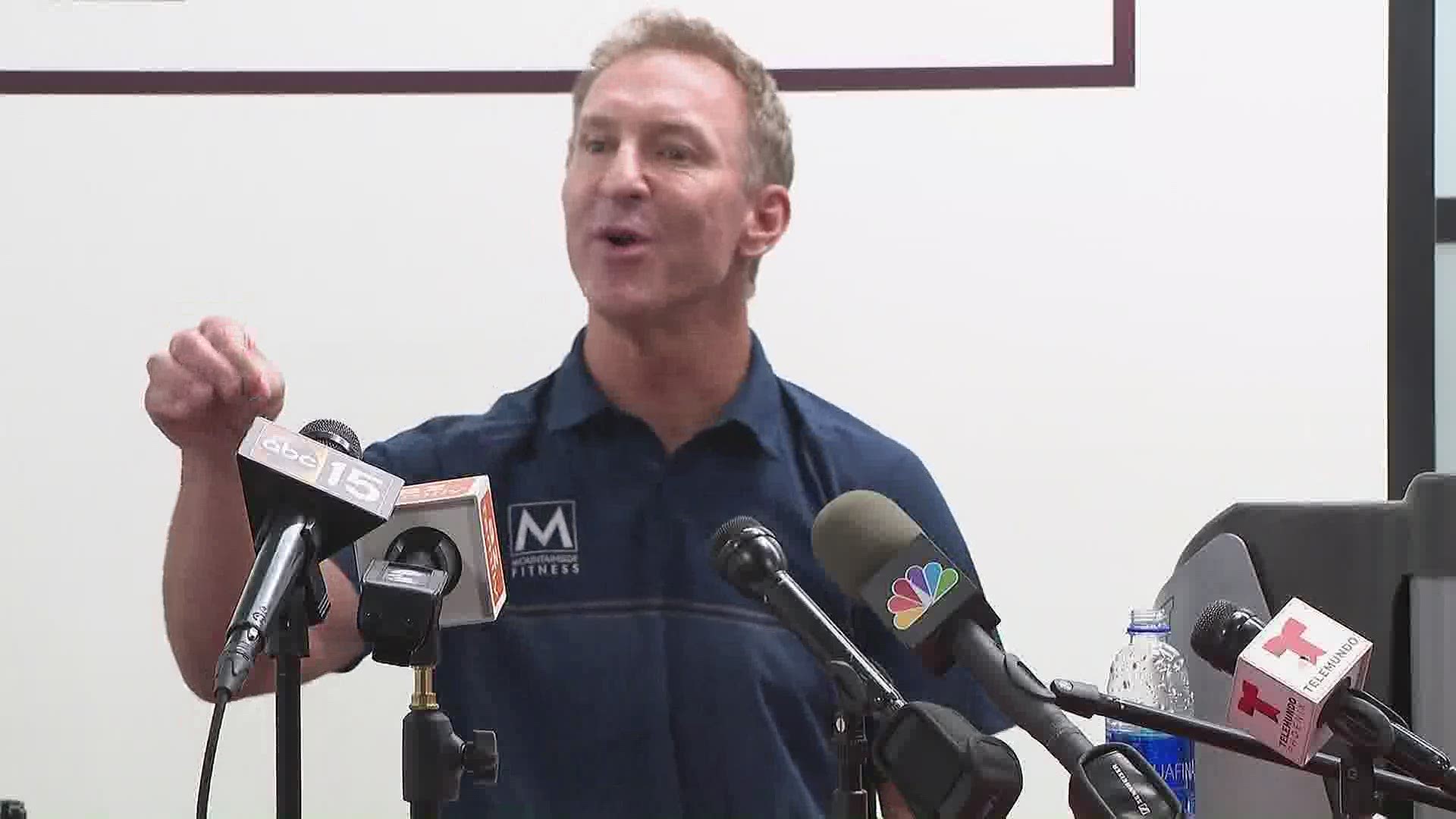 SCOTTSDALE, Ariz. — Mountainside Fitness CEO and Founder Tom Hatten said Friday his gyms will remain open until they have their day in court.

Hatten has previously stated the gyms would remain open and his company would sue Gov. Doug Ducey to block his order. That lawsuit was filed Tuesday. Mountainside locations have been cited multiple times for failing to close.

In a press conference on Friday, Hatten continued to say he believes gyms should not be closed in order to stop the spread of coronavirus in Arizona, or if they must close, he believes it should be an "all or nothing approach" and other businesses including restaurants should close as well.

Hatten himself acknowledged that some of his staff members have tested positive for the virus but said he didn't know the exact number. He also argued that the state made the decision to close health clubs arbitrarily and without evidence that his business contributes to the spread more than any other industry.

A decision on the lawsuit between Mountainside Fitness and Gov. Ducey is expected on Monday.

Life Time, which also kept fitness portions of their health clubs open despite Gov. Ducey's order, announced they would close fitness portions again following a conversation with the governor's office and ADHS Director Cara Christ. They said they will close until Monday evening.

Hatten announced Mountainside Fitness has been cited in a press conference on Tuesday.

Scottsdale PD said officers responded to the Mountainside Fitness location in Scottsdale at 9:45 a.m. after multiple reports of the gym being open.

Scottsdale PD said officers provided education about the executive order to club management in an effort to gain compliance. The club said it would remain open.

Officers returned at 2:25 p.m. and found it was still open. The gym’s chief operating officer was cited for a class one misdemeanor in violation of A.R.S. Section 26-317, per police.

Police say several other Scottsdale gyms are under investigation and may also be charged with similar violations.

Ducey issued an executive order Monday once again closing bars, gyms, movie theaters, water parks and tubing until at least July 27 in attempt to slow the spread of the coronavirus, which has spiked in the state in recent weeks.

The businesses listed in the order were told to close by 8 p.m. Monday but several gyms in the Valley are choosing to stay open.

Mountainside Fitness filed a lawsuit against Ducey Tuesday in an attempt to block his executive order with a temporary restraining order.

In the complaint, the company argued it is operating in compliance with the Arizona Department of Health Services' guidance for gyms and fitness providers.

"In the scenario that we are not able to come to a mutually acceptable resolution, we will proactively be filing a lawsuit against Governor Ducey tomorrow in an effort to overturn the Executive Order along with a motion for a temporary restraining order asking the courts to permit us to reopen and remain open until our challenge to the Executive Order can be resolved."

As many gyms around the state have announced their intentions to remain open in defiance of the order, and a lawsuit brought against Ducey by Mountainside Fitness, Ducey says he wants law enforcement to take immediate action.

Ducey's spokesman Patrick Ptak made the following statement on Tuesday regarding enforcement of Ducey's executive orders:

"We are coordinating and communicating with law enforcement, making clear the executive order provides full authority to enforce it immediately. (Offenders) don’t need to be educated first. There is immediate enforcement."