12 News spoke with Paul Ng off-camera Monday. He said he shouldn't have said what he did. 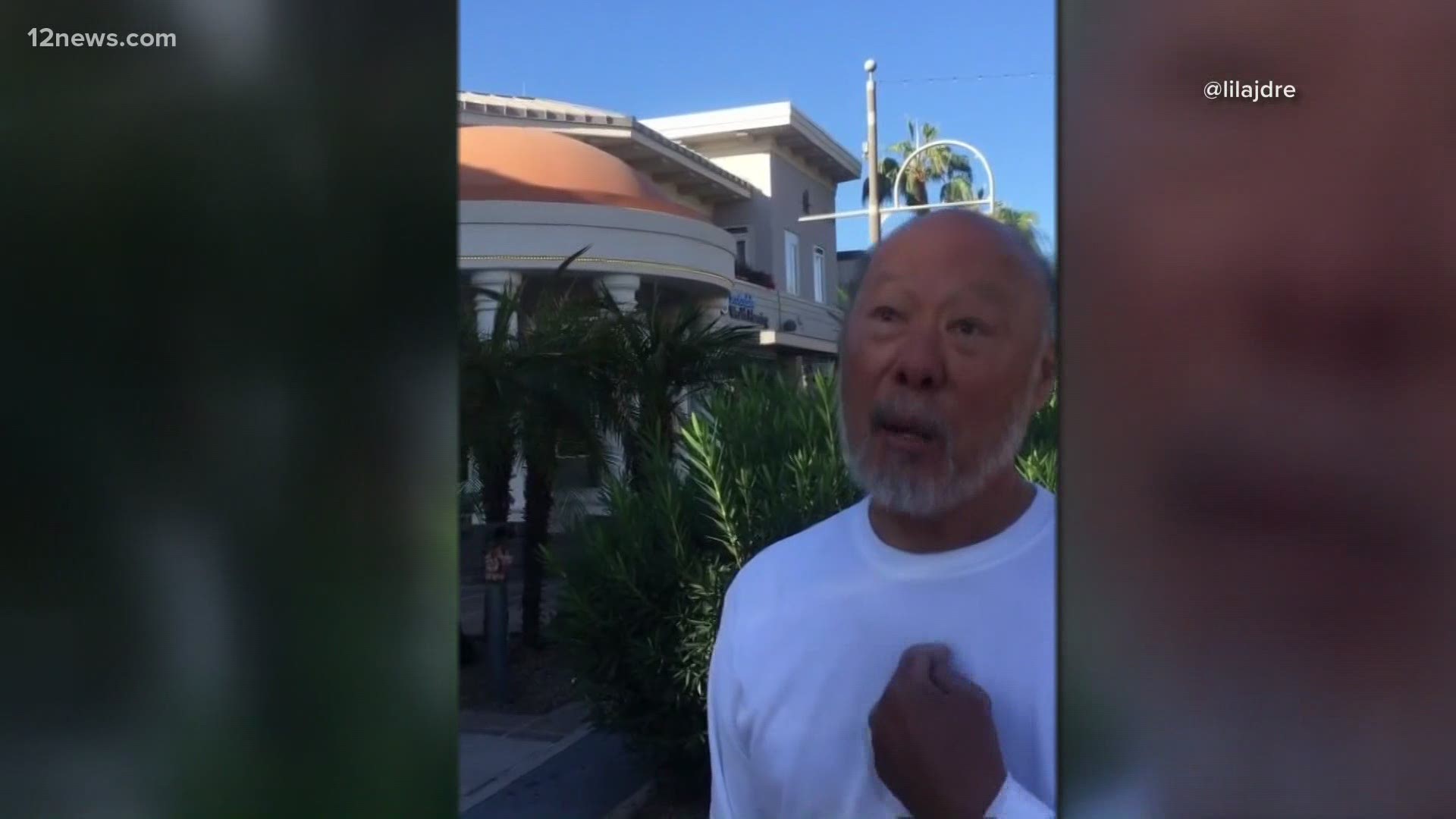 SCOTTSDALE, Ariz. — A Scottsdale man is under fire after he used a racial slur and called himself a racist while confronting two Black men on a now-viral video Friday morning.

Records show Scottsdale Police arrested Paul Ng, who is now facing disorderly conduct charges. The arrest comes after a video of the incident went viral over the weekend.

"It’s just so hard to kind of go back and replay," says 25-year-old YouTuber Dre Abram.

Abram was the man who recorded the video. Abram said he and his roommate were out recording a podcast for his Youtube page on Main Street in Old Town Scottsdale.

Abram said Ng approached them on the sidewalk outside his condo.

"It’s a numbing feeling," said Abram. "Someone is seriously doing this to me right now? And at that point, it’s, 'Be smart, be smart.'"

Abram posted the video on his social media channels, where it spread over the weekend. As of Monday evening, his post on Instagram had almost 182,000 views and it had been reposted to many other accounts.

In his first post of the video, Abram said he thought Ng was an employee at River Trading Post because they were standing outside the shop. Owner Kathi Ouellet confirms Ng is not affiliated with the store but lives in a condo above it.

Abram has since reposted that he's aware Ng is not connected to River Trading Post.

Ouellet said they've received death threats and negative reviews because of the video. Even though she's shocked by the backlash to her store, she's more shocked her neighbor would say what he did.

"As far as I’m concerned, it was off the charts wrong," she said.
"Frankly, I found this really shocking. I didn’t expect this from him."

12 News spoke with Ng off-camera Monday.  He said shouldn't have said what he did.

When Abram first starts recording, Ng tells him, "We've had trouble around here."

Abram responds by saying, "Do you know a lot of white men are doing racist things in this world, sir?"

Police records show Ng told police he was concerned about riots and the safety of his family. He told police he "keeps an eye on the neighborhood" and said the entire incident with Dre was "unusual."

When an officer asked Ng if he understood his comments could be provoking and insulting, records show Ng responded by asking if the police thought the statements were "inflammatory."  Ng told police he didn't intend to be inflammatory.

The police report goes on to say that Ng stated he used the terminology that he did "because Dre "inflamed" him when Dre`s insinuation was that Scottsdale was full of 'white racists.'"

The agency sent a statement that reads, in part:

"On Sunday we learned of an extremely hateful and racist video that was posted to social media showing one of our inactive Independent Contractors, Paul Ng, demonstrating abhorrent, unacceptable behavior. Upon learning of this video we took immediate action in severing his license, terminating his involvement with us effective immediately and condemning his disgusting behavior."

The agency said they also reported Ng to the Arizona Department of Real Estate and recommended his license be revoked.

"I want him prosecuted to the furthest extent," Abram says. "I feel like this is a huge example."