Restoring names to the nameless

For cold case Detective Stuart Somershoe of the Phoenix police, his job is to piece a puzzle together and identify those who, in death, have no identity. 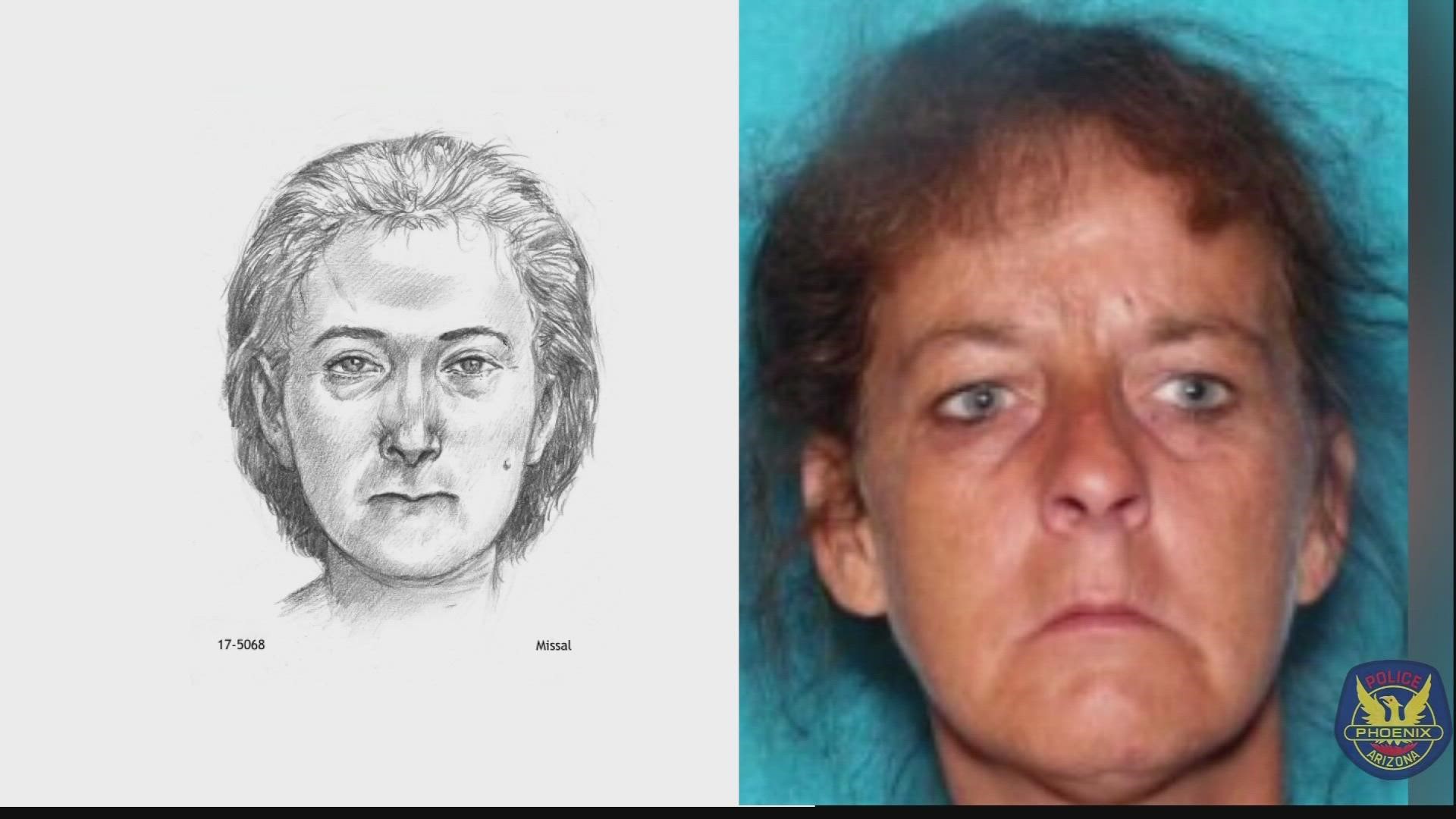 PHOENIX — For law enforcement officers, there's a continuous issue called "the silent mass disaster." The phrase refers to more than 40,000 unidentified bodies across the country.

For most, there are families out there, somewhere, wondering what happened to their loved ones.

Cold case Detective Stuart Somershoe of the Phoenix Police Department's primary job is to piece the puzzle together and identify those who, in death, have no identity.

“We’re trying to identify these people who have lost their identities when they died,” said Somershoe.

On a typically hot July day in 2017, the body of a woman was found in the backyard of a home near 24th and Roosevelt streets in Phoenix.

Police noted that she was dressed in a white shirt with green dots or sequins over a green shirt. She was wearing a pair of black pants that were a little too big for her, with a pair of gray and purple “K-Swiss” shoes.

Beyond that, they didn’t have much else to go on.

She had two tattoos, which provided some clues, and would later help to confirm her identity. But in the early days of the investigation, those tattoos were enigmas of their own. One tattoo on her leg read “Laura N Layla” and the other tattoo, on her upper left chest, was a rose and the name Stuart.

Her death was determined to be heat-related, which fit what the homeowner told police. The homeowner had met the lady a few days earlier in the yard, trying to stay out of the sun. The homeowner gave the woman some water that day.

Investigators went through the usual methods of trying to find out who this “Jane Doe” was. The woman had no teeth to match dental records to and they could only get partial fingerprints due to the condition of her body. Before long, her case ended up on Somershoe's desk.

Aside from the tips and tricks of the trade that Somershoe learned over the course of his career, he had another tool at his disposal: Forensic genealogy.

Thanks to the non-profit DNA Doe Project, a team of forensic genealogists used the DNA of unnamed missing people to track down close family members of the deceased.

Once the person’s DNA is loaded into a genealogical database, researchers at DNA Doe Project begin the long process of building a family tree based on the information revealed. The project is run entirely by volunteers.

“I think this is the most selfless act that you can do is bringing back and restoring the name of the unidentified,” said Gabriella Vargas, the Director of Training at DNA Doe Project and the Team Lead on the case of the woman found in 2017. “Bringing closure to these families that have long waited for answers. There’s no greater feeling than being able to contribute to this cause.”

Restoring names to the nameless

It took countless hours to unravel the mystery of the woman found in 2017.

Eventually, a team of graduate students from the University of New Haven, along with the guidance of Vargas, found the name of the woman who had gone so long without one.

Jordan's family was informed of her death recently and can now process and grieve.

“The family was extremely grateful to find out what happened,” said Somershoe. “They had been looking for Laura for all these years.”

According to Somershoe, the family never filed a missing person’s report because for Jordan, who had experienced homelessness, being out of contact was normal. But the family never stopped looking for her.

“Probably one of the more satisfying parts to my job is to finally give an answer to a family,” said Somershoe. “Say, 'Hey, this is what happened to your loved one. You can move on now and deal with this process [of grieving] and not live in this limbo.'”

Three Phoenix-area cold cases have been solved with the help of the DNA Doe Project, with more in the works.