Farrar was killed in the line of duty last week when police say a suspect hit him with a car after he led law enforcement on a high-speed chase from Eloy to Gilbert. 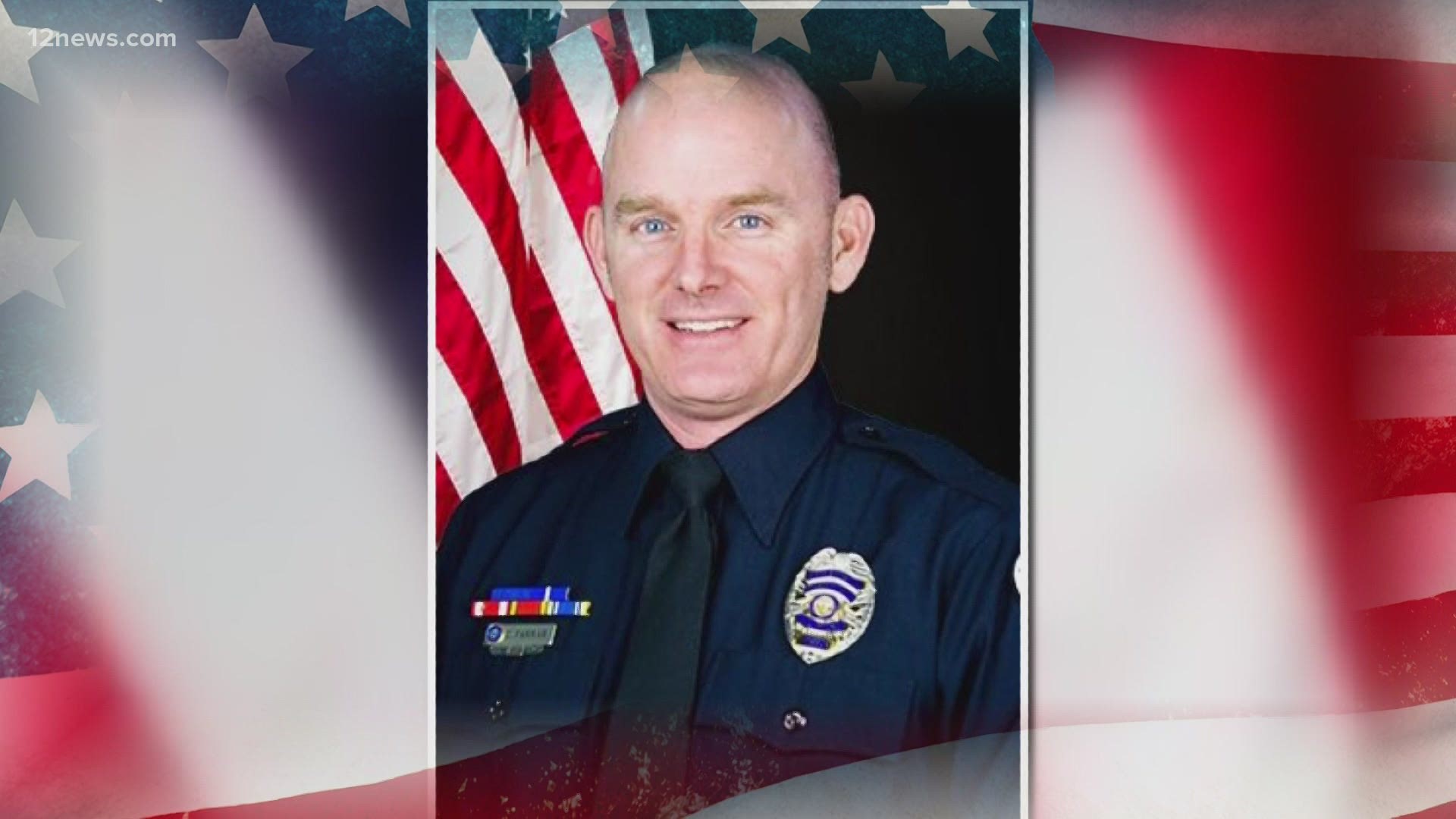 Farrar was killed in the line of duty last week when police say Jonathon Altland hit him with a car after leading law enforcement on a high-speed chase from north of Eloy.

Five others were injured, including Gilbert Police Officer Rico Aranda. Gilbert Police said Aranda is improving and should get moved from the ICU in a few days.

‘We didn’t just lose a coworker’

If you ask Chandler Detective Tom Schurhke if he has a favorite memory with Officer Christopher Farrar, he laughs, remembering times passing Farrar in the halls of the Chandler Police Department.

“It was just fun, we had fun. That’s what this was, we didn’t just lose a coworker, we lost someone we could have fun with,” Chandler Detective Tom Schuhrke said.

Schuhrke, who is also the vice president for the Chandler Law Enforcement Association, describes Farrar as a ball of energy with a heart for service to others, with the awards to prove it.

“When he showed up to your house he was honestly there to help you, to try and help fix whatever problem he was called for to deal with in the first place,” Schuhrke said.

Court documents show Altland drove away from Pinal County Deputies who tried to pull him over for speeding north of Eloy.

Records say Altland started shooting back at a deputy and he took off.

The records show Altland led them on a high-speed chase, including driving the wrong way on the freeway before crashing the car.

Police said Altland then ran on foot to a dealership where he attempted to steal another car, but was confronted by officers from multiple agencies, and struck Officer Farrar. Farrar died at the hospital.

Three DPS troopers and an employee of the dealership were also injured in the incident. The Department of Public Safety told 12 News on Friday all three of them had been released.

In part, the statement reads:
“We are encouraged by Gilbert Police Officer Rico Aranda's recovery progress. We are happy to report that he is responding well to treatment and we expect him to be transferred within a couple days out of ICU and into neurological treatment and recovery.”

Since the news of Officer Farrar’s passing, the community has stepped up to help the family.

Flowers and mementos have been placed at a memorial outside and inside of the Chandler Police Department.

On Saturday, dozens gathered for a vigil to honor Farrar.

Several Valley businesses have made moves to fundraise for Farrar’s family and Officer Aranda’s recovery as well.

Tuesday, Mickelson Golf Properties in the Valley will donate 100 percent of all green fees to the 100 Club of Arizona, a non-profit that helps families of fallen officers.

“When something tragic like what has happened to Officer Farrar and Officer Aranda we felt an obligation to reach out and step up and try and help those families,” Steve Loy, CEO of Mickelson Golf Properties said.

Thursday, Zzeek's Pizza at Warner and McQueen are donating 20 percent of dining, carry out, delivery and online purchases to Farrar’s family. Find details on how to participate here.

“This is to help them continue because when you remove the vital part of a family like that – you’ve got three kids that are needing to move forward but it’s tough when you lose that anchor,” Schuhrke said.