A Phoenix police officer resigned his position over radio traffic after dispatchers told him the entire shift needed to stay on the clock to answer more calls. 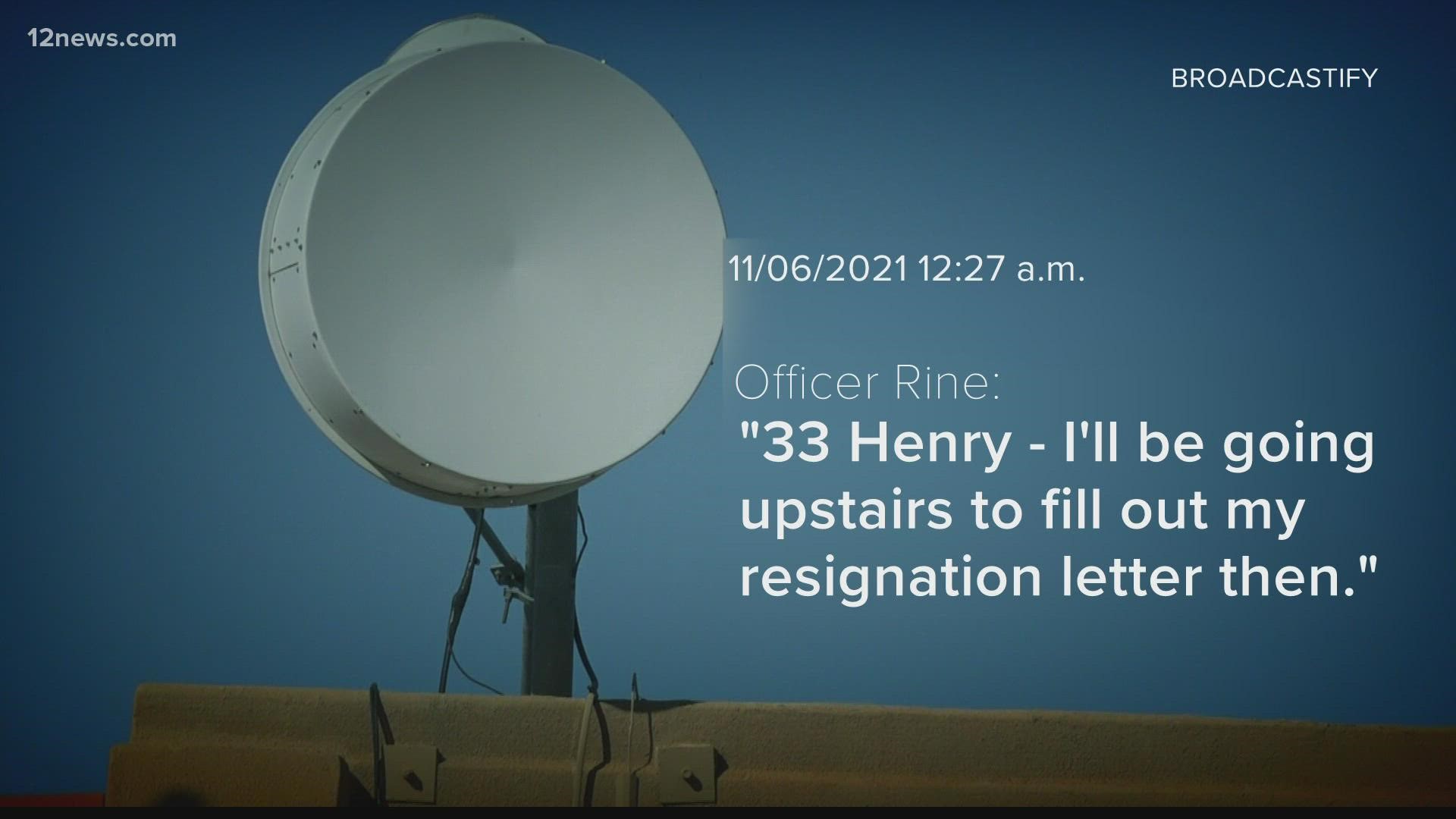 PHOENIX — A public resignation heard on the Phoenix Police Department’s radio over the weekend is calling attention to a lack of staff and the toll it’s taking on officers.

It was a Friday night shift, turned into a Saturday early morning when a Phoenix police dispatcher calls over the radio for an officer.

“933 Henry for traffic,” the dispatcher calls.

It’s 12:26 in the morning on Saturday, Nov. 6, just a few minutes before Officer Mark Rine’s shift is supposed to end.

Over the next minute, the dispatcher and another unidentified officer tell Rine the whole shift is working late.

Dispatcher: “I’ll check with the LT (Lieutenant), I think we’re also mandatory holdover until the calls go down.”

Unidentified officer: “Patrol 94, we’re being held over for a little bit if you can get out and answer some calls I’d appreciate it.”

Rine: “33 Henry - I’ll be going upstairs to fill out my resignation letter then.”

A Phoenix Police Department spokesperson told 12 News that Rine does still work for the department, even though they have Rine’s resignation memo.

According to public records, Rine has been with Phoenix police since 2007.

In 2014, Rine shot and killed Rumain Brisbon, a Black man who didn’t have a weapon on him.

While the city of Phoenix paid out a $1.5 million settlement to Brisbon’s family, Rine was never charged.

Rine refused to talk with 12 News for this story. 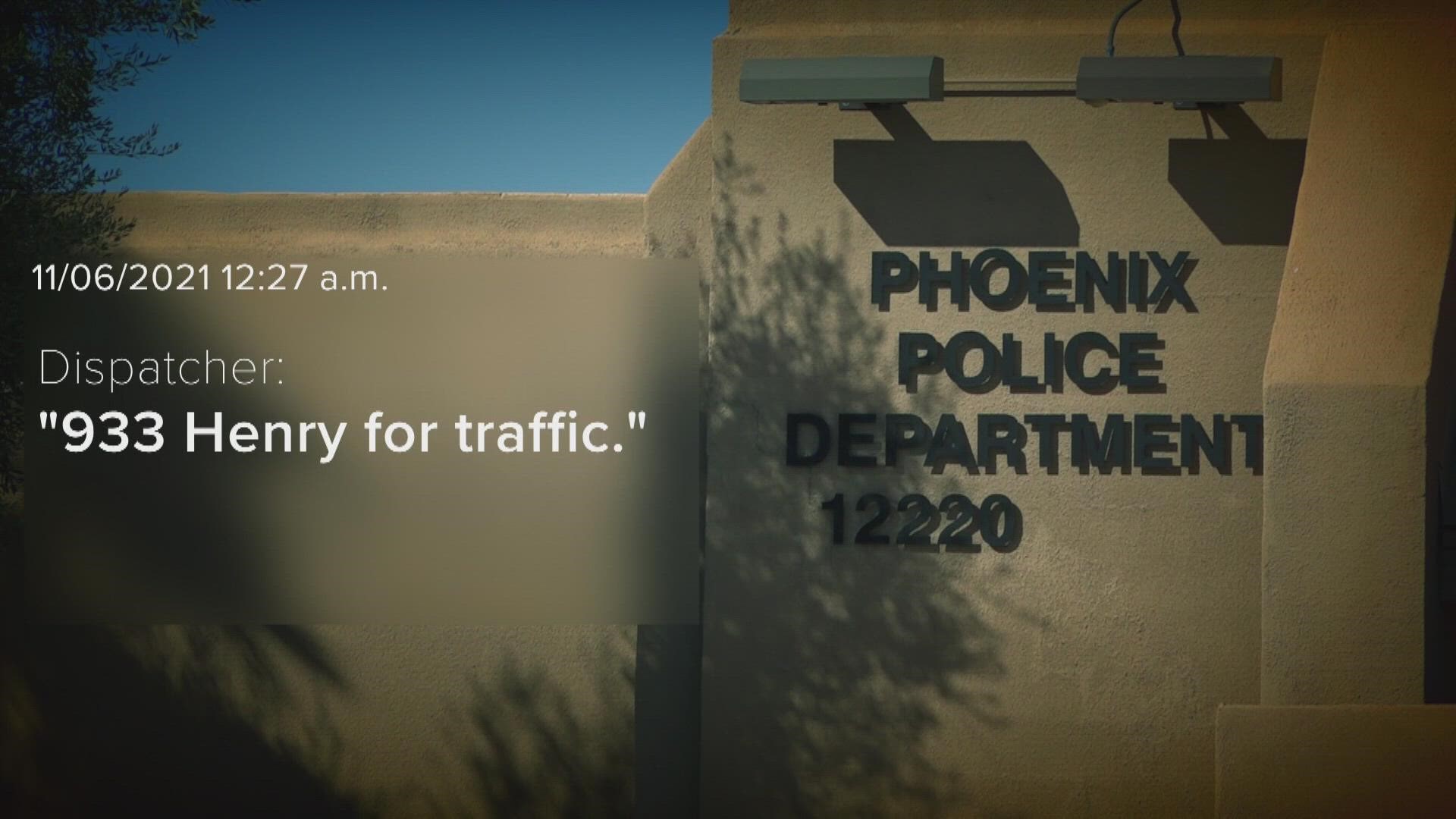 Officers leaving at ‘an accelerated rate’

Phoenix police would not do an interview with 12 News for this story, but Executive Assistant Chief Michael Kurtenbach appeared during a Phoenix Public Safety and Justice Subcommittee meeting on Wednesday to discuss staffing in the department.

“We are losing officers at an accelerated rate,” Kurtenbach told the committee.

“If we continue to lose sworn staff at the rate we’re losing, or to be quite candid - we quit losing right now, just as calls for service are going up, violent crime is going up, response times are going up, at some point we’re going to have to seriously look at redeploying what already exists if we can’t bring new officers through the door,” Kurtenbach said.

Kurtenbach said 212 officers have left the department so far this year, and a total of 254 are expected to leave through the end of 2021.

He added half of the officers leaving are from patrol.

However, Kurtenbach said Phoenix police are on pace to respond to 11,000 more emergency calls this year than in 2020.

Kurtenbach told the committee that response times are up to 6 minutes and 40 seconds. That particular statistic has been increasing since at least the fiscal year 2011, according to the police department’s presentation.

“We’re doing our best to fill the holes as we’re filling them,” Kurtenbach said. “But the reality is if we continue to lose the way we are losing sworn then we’ll have to make very hard decisions about where we put our employees.”

Kurtenbach told the committee they’ve already had to get creative to fill needed positions on the street, saying they’ve taken some of their specialty officers and are using them on patrol.

In addition, Kurtenbach said supplemental overtime is being provided too.

“We’re empowering the respective chains of command, the commanders, the shift lieutenants, and sergeants to call people in,” Kurtenbach said. “Those that are scheduled and unscheduled so we can at least meet minimum staffing.”

After announcing his resignation over the broadcast Saturday night, an unidentified Phoenix police officer comes back over the radio after at least one other call is dispatched.

Officer: “I just want to reiterate, second shift is being held over.”

The dispatcher calls for him to respond a few times, but he never responds.

Dispatcher: “Patrol 94 - no response on radio."