The proposal would take Central Avenue down to one northbound and one southbound lane with a dedicated center left-turn lane and a buffered bike lane. 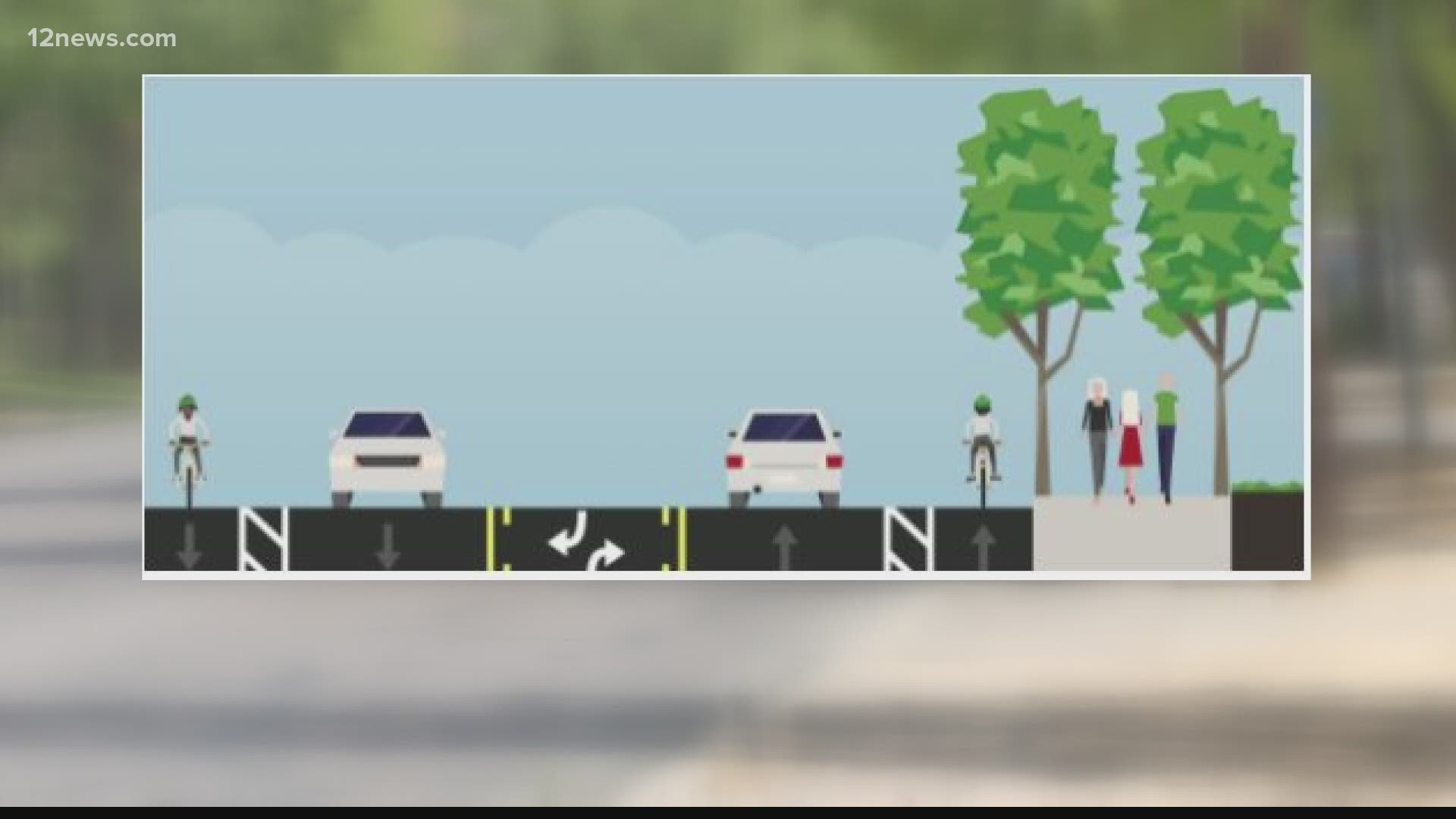 PHOENIX — A new proposal by the City of Phoenix has some residents along Central Avenue organized in opposition to what they feel would ruin their historical neighborhood.

“This is a jewel of an area, this has been a gem in Phoenix for decades, generations of people have grown up here,” said Jill Goldsmith, a longtime resident in the North Central area. “This proposal will take this gem and make it a grim place to live.”

The proposal that has Goldsmith feeling vexed is a potential realignment along Central Avenue between Bethany Home Road and the Grand Canal just north of Northern Avenue. That stretch of Central Avenue will be repaved this fall.

What the City of Phoenix is proposing would happen after the repaving.

“Safety is always a top priority for the City of Phoenix Street Transportation Department and an addition of that two-way left-turn lane- or that yellow lane- as well as the addition of buffered bike lanes can have safety benefits, so we wanted to take that to the community to see what their priority is for that stretch of roadway,” said Ashley Patton of the City of Phoenix Street Transportation Department.

Under the proposal, the City said it would make turning off Central Ave. safer for vehicles, while the bike lanes would add a layer of safety for bicyclists along the roadway.

But that’s not how some residents in the area see it. They say the City isn’t looking at the whole picture and they formed an organization to make sure they are heard.

“Central's too slow anyway,” said Patrick Hassett, a nearby resident who is opposed to this idea. “If you drop it down to one lane, north and south, It's going to create safety issues in the neighborhood because what are you going to do as a commuter? You're going to avoid it and you're going to speed through my neighborhood and hit one of our kids.”

Goldsmith says bus stops and garbage trucks picking up trash along Central Avene will create a huge headache for commuters.

“So, they are going to block the only through lane that Central has, which will turn Central Avenue into gridlock.”

She is also critical of the need for bike lanes along Central Avenue.

“That's what's so crazy about their proposal,” said Goldsmith. “We don't need more bike lanes; we have them. We have this Bridle Path. But more importantly, Third Avenue is part of the Phoenix Sonoran Bikeways. Thirty-five miles of bike lanes from South Mountain to Cave Creek.”

She points to the bike paths along 3rd Avenue, just three blocks to the east of Central Avenue.

For the city’s part, Patton says the Street Transportation Department will do whatever the residents say they want to be done. The City opened a survey for anyone who would be affected by the proposal to make their thoughts heard on the matter.

The survey will run until June 11. After that, the Streets Transportation Director, Kini Knudson, will make the final decision on the proposal.

Goldsmith and Hassett are hoping the City takes their concerns seriously.

“It's a special unique place with lots of greenery, with lots of neighborhood fields and residents really love it just the way it is. We want to save Central Avenue,” Goldsmith said.

For her part, Goldsmith has collected the names of more than 600 residents who oppose the proposal and plans to send them in a letter to the Phoenix Mayor, City Council and Director Knudson, asking that this proposal be rejected.