The official protest ended peacefully at 7:30, but there were still a couple hundred people on the streets after the curfew went into effect. 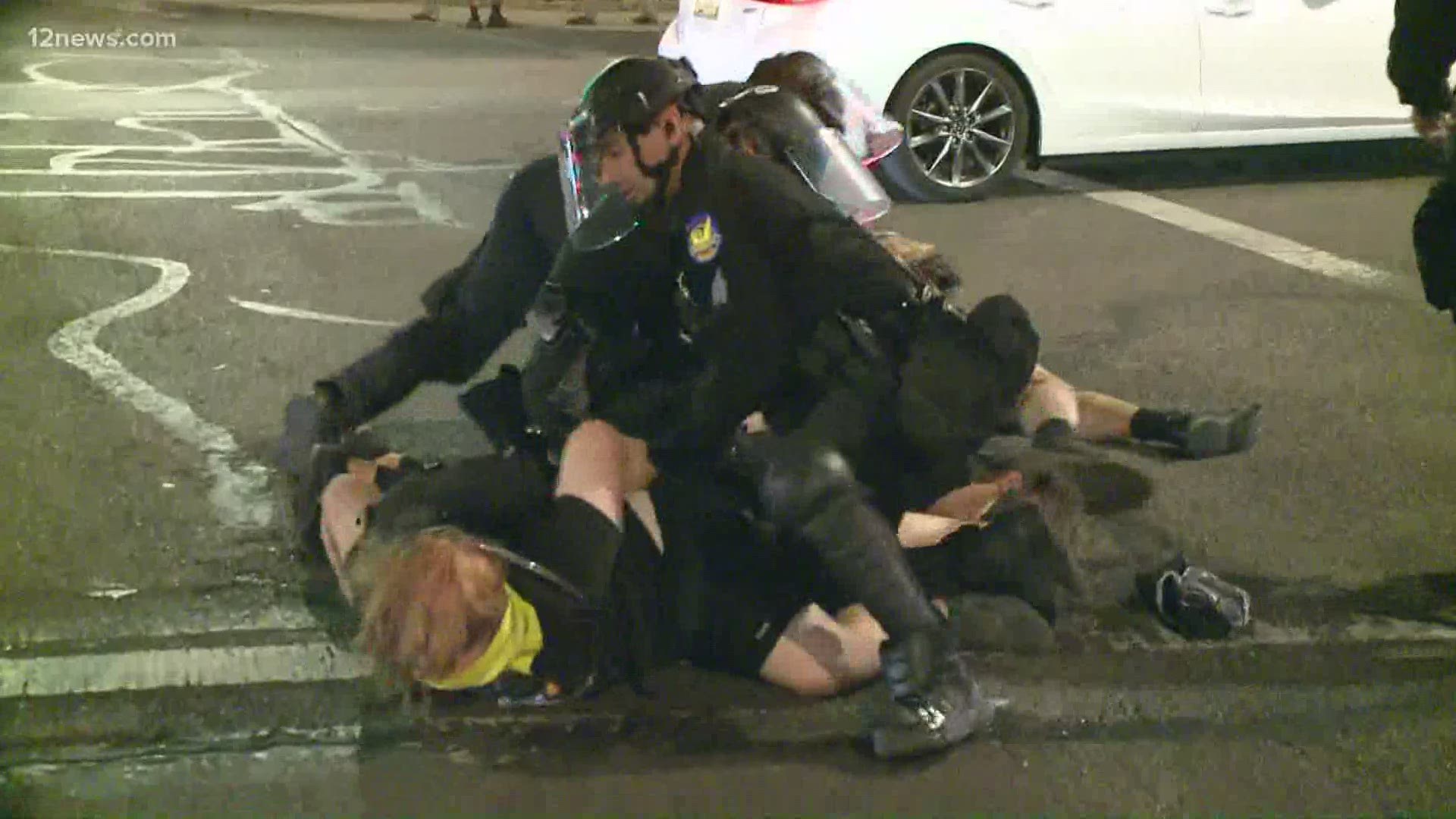 PHOENIX — Hundreds of people returned to the streets of downtown Phoenix Sunday evening on the fourth day of protests over George Floyd's death.

RELATED: Ducey declares 8 p.m. curfew in Arizona for one week

They held signs and wore protective masks as they marched in a large stream down Adams Street toward police headquarters, passing police roadblocks along the way. They continued to circle the department and chanted "no justice, no peace."

The official portion of the protest came to an end with a prayer and a vote at 7:30 p.m.

10:30 p.m. - Thanks to a large police presence, the streets were mostly clear of stragglers after 10 p.m. But officers were still looking for people wandering in neighborhoods and investigating tips from the public.

9:50 p.m. - Protesters are no longer marching in large groups but are hiding in dark areas of neighborhoods and avoiding officers, police said. Officers are stopping people still out in public and asking to see their IDs.

At least half a dozen more people were placed in handcuffs in downtown Phoenix.

9:10 p.m. - At least two protesters were taken into custody in the area of 7th and Roosevelt streets.

9 p.m. - Police in riot gear threw tear gas and firecrackers at the crowd on 7th Street just before I-10, causing them to disperse. A few people were seen being detained during the commotion.

8:29 p.m. - A couple hundred protesters continued to march downtown as police told them over loudspeakers to leave. An ATM was smashed in the area of Central Avenue and McKinley Street.

8:19 p.m. - Police have declared an unlawful assembly and asked protesters to leave.

8 p.m. - Police in riot gear asked protesters to leave when Arizona's curfew went into effect. The crowd in the area of Van Buren and Roosevelt streets dispersed. It's unclear if they remained dispersed or gathered elsewhere.

7:36 p.m. - As the statewide curfew at 8 p.m. approached, the official portion of the protest in downtown Phoenix ended with a call to vote and a prayer.

7 p.m. - The crowd swelled to well over 500 people at one point. Speakers asked attendees to remain peaceful and made it a point to thank undocumented protesters.

Some people were seen on the roofs of buildings in the area of 5th Avenue and Monroe Street holding up signs.

Valley Metro said police told them to stop bus and light rail service in the area because of the crowds.

Traffic is restricted in the area between 7th Avenue to Central between Van Buren Street and Jefferson Street, police said.

A curfew goes into effect at 8 p.m. after Gov. Ducey declared a statewide emergency Sunday.

Hundreds of protesters are marching through downtown Phoenix for the fourth evening in a row over the death of George Floyd. Joe Dana is live on the scene.

This is a developing story. Check back for updates as the night continues.