Police, Phoenix Rescue Mission partnership serves some of the Valley's most at-risk communities

The Goodyear Police Department partners with the Phoenix Rescue Mission to help reach communities in need. 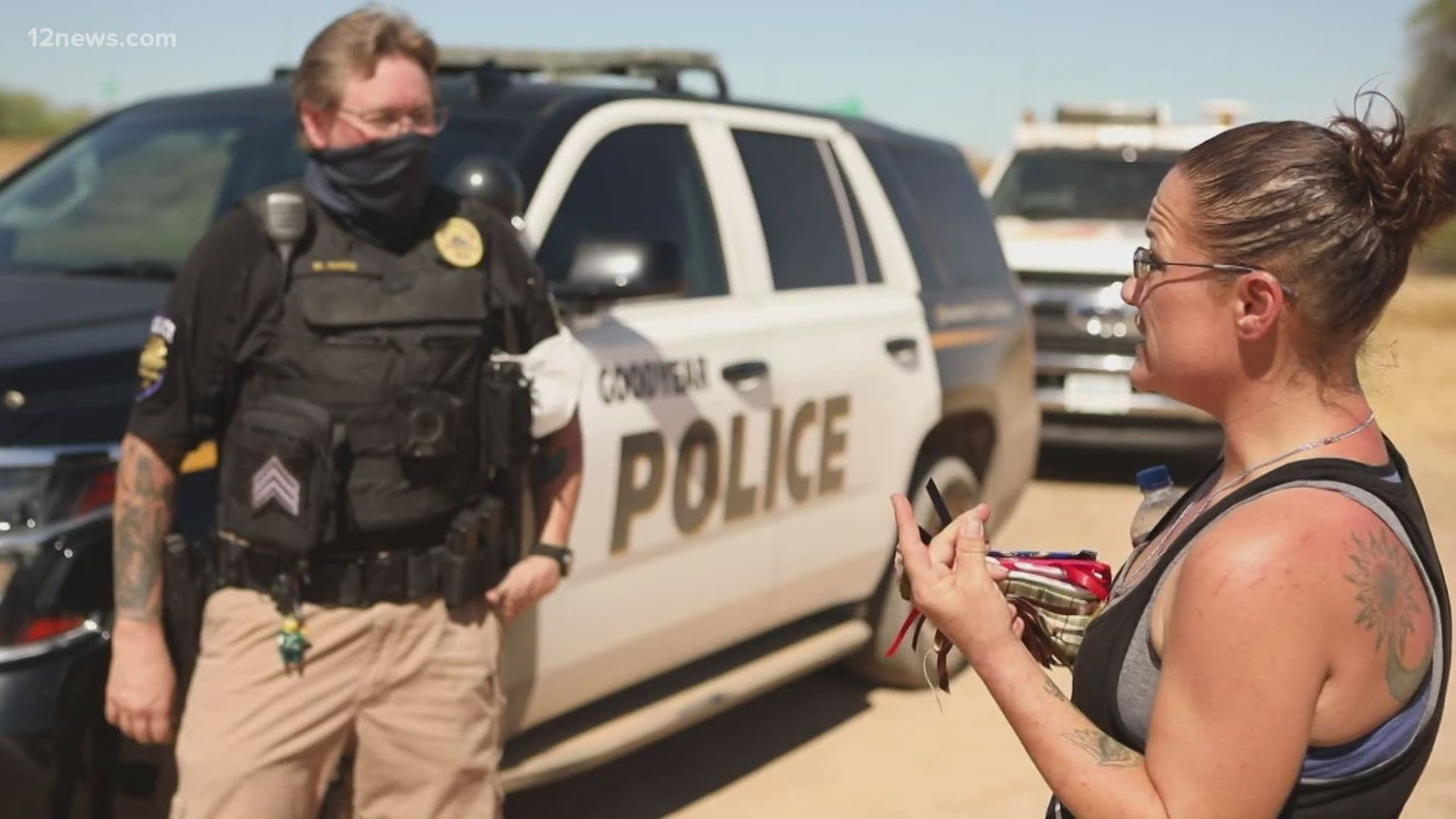 GOODYEAR, Ariz. — For Jaime Wright, home is under the shade of a rare tree in the middle of the blazing Arizona desert.

“Almost a year of being out here is really hard on somebody," Wright said.

So, a kind gesture, someone genuinely checking in makes a world of difference.

“They come out here with open arms and they help you with whatever you need," Wright said. "It means everything.”

Wright has been homeless for months. She lives with her fiance off of the I-10, in the middle of a dirt lot in Goodyear.

It’s one of the places the Goodyear Police Department and Phoenix Rescue Mission visit with care packages, which are an ice breaker with a greater purpose.

Rich Heitz is on the Phoenix Rescue Mission's street team.

“(We) Offer to help get ID, social security card, birth certificates, help to get to detox or programs, whether it’s our program or someone else's program,” Heitz said.

Personally knowing the tough road of homelessness himself, Heitz is passionate about his work. He visits these camps in Goodyear and other Valley cities. That's where he says he spreads hopeful messages where there’s a lot of hopelessness.

“We’ve been there," Heitz said. "We know what it feels like. We can relate. We can speak to them in a language without the fear of thinking you’re going to jail.”

Heitz visits the camps with Sgt. Mary Ward of the Goodyear Police Department. Ward is an officer Wright and her friends know well.

“When Officer Ward showed her face and she showed what kind of a human being she is, she’s got a heart of gold that I’ve never seen in anybody before," Wright said.

Ward passes out water bottles, gets to know Jamie and her friends, and can even call in the Rescue Mission if there’s a petty crime to offer an opportunity to avoid arrest by joining programs to better their lives.

It’s all part of the job Ward says a lot of officers like her do because they want to make a difference.

“We want to interact with homeless, non-homeless, with our partners like Phoenix Rescue Mission," Ward said. "We just want to be out there and help and do good for our communities.”

It's outreach Wright and her friends see and feel, as she says she works to get out of this makeshift shelter and into a more permanent home.

“I could care less where it’s at as long as I have a roof over my head," Wright  said.

The Phoenix Rescue Mission says they also have contracts like this with Glendale, Peoria and Avondale. The goal of the partnerships is to reduce crime and build trust in the communities they serve. 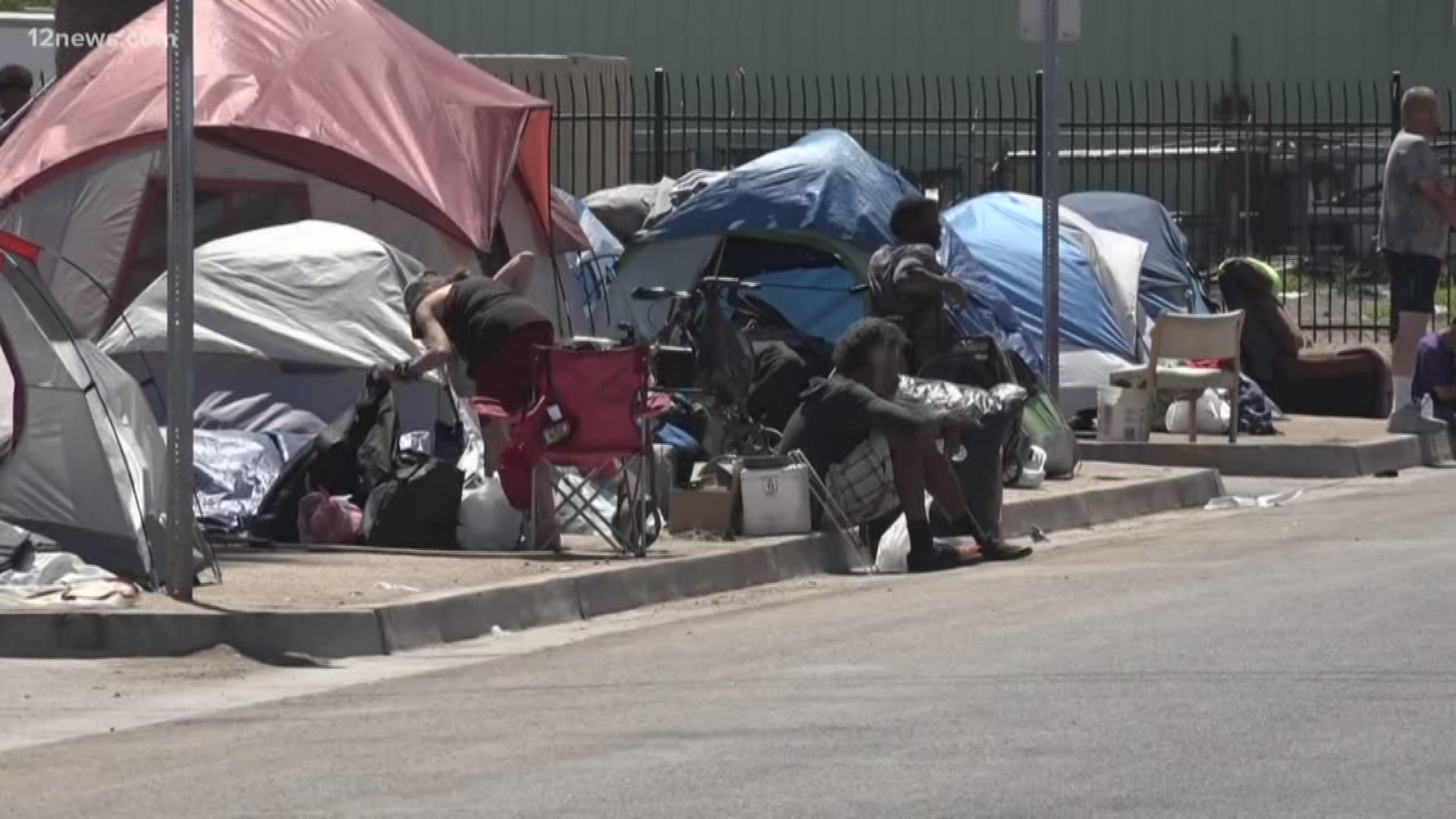 - 'It's my turn': Mother, 1st-generation Vietnam immigrant graduates from ASU amid coronavirus pandemic

- On the front line: Providers testing for COVID-19 antibodies as the state issues testing blitz