Maricopa county officials push effort to spay and neuter pit bulls in high poverty Phoenix neighborhoods, and educate the community on how to handle them. 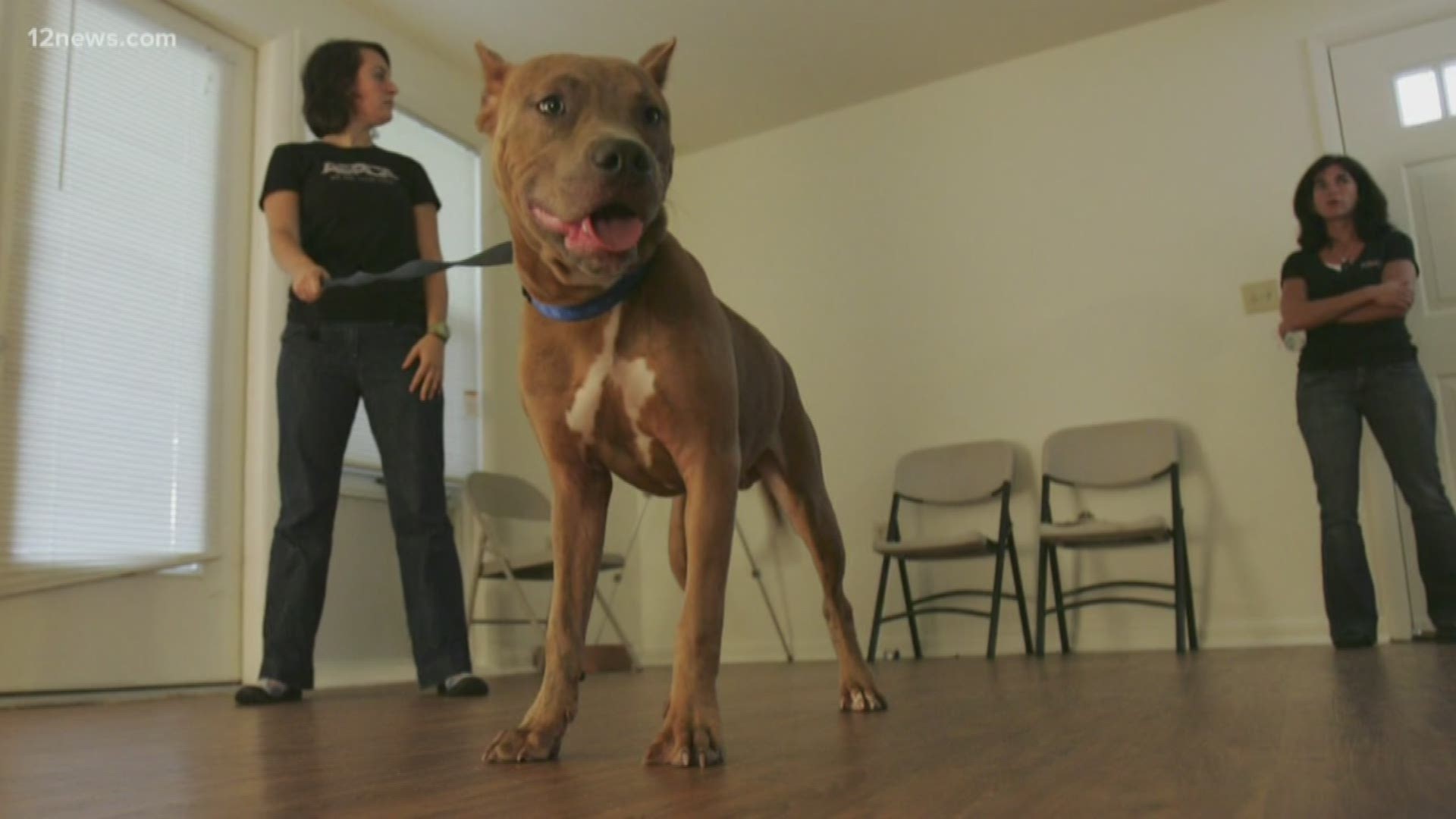 PHOENIX — The county’s largest animal shelter is filled with dogs of a common profile: muscle-bound, blocky headed, short-haired dogs. Some of them, in the words of one county official, are “sweethearts.” Others are temperamental, especially around other dogs. They are all versions of what are commonly referred to as pit bulls.

RELATED: 'Bonded' Chihuahua, pit bull terrier up for adoption in Arizona looking for their fur-ever home

The dog’s popularity and history of attacks in the U.S., including one last month in West Phoenix that left a 2-year-old girl in critical condition, prompted the 12 News I-Team to examine whether pit bulls pose a public health risk that is unique from other dogs. The I-Team analyzed county dog bite records that reveal pit bulls contribute to hundreds of more incidents annually compared to other breeds.

But animal welfare officials point to other environmental factors as likely causes for the high bite count.

“The truth is I don’t have the answers as to whether pit bulls inherently are dangerous. I know the experts tell me that is not true,” said Mary Martin, Director of Maricopa County Animal Care and Control. “What we try to say as an agency is that they are dogs. And each one is different. Some of them are really awful and some of them are to-die-for precious.”

A debate has raged for decades about whether pit bulls are inherently more dangerous than other dogs. “Pit bull” is not a breed, but rather a term used to describe a category of American pit bull terriers or Staffordshire terriers and mixes.

According to Maricopa County dog bite statistics, over the past three years, American Pit Bull Terriers and related mixes have led annually in total documented attacks to people and animals. In 2019 they accounted for 801 or 17 percent of the total. The next closest breed was German Shepherds and related mixes with 344 bites, or 7 percent of attacks.

A quarter of total attacks in 2019 are categorized as “breeds unknown.”

Nationally, the nonprofit DogsBite.Org tracks reports of dog attacks in the U.S. and estimates that over a 14-year period between 2005 and 2018, canines killed 471 Americans.

Pit bulls accounted for 311 of those deaths, or 66 percent of the total, according to the organization.

High profile attacks this year involved a 5-year-old boy near Los Angeles who was killed by his family’s 12-year-old male pit bull after the boy was left alone in a room with the dog “for just a few seconds,” according to a family member.

A relative said the dog “snapped” with no warning.

On February 11, a family pit bull in Plainfield, Illinois killed its 22-year-old owner and injured three other relatives in an attack that a police officer described as “unprovoked.”

In January, a family’s pit bull in Phoenix snatched 2-year-old Aria from her mother’s arms. According to the girl’s mother, the dog heard a loud noise before attacking. It mauled the little girl’s face, leaving her in critical condition with 2,000 stitches.

As Aria recovers in the hospital, her mother Kelley Gorrie tells 12 News she used to defend pit bulls, believing they got a bad rap. But she won’t defend them anymore, she said.

Most recently, researchers at the Charleston Area Medical Center in West Virginia released a 10-year study of dog attack patients in the southeast U.S., concluding “a bite resulting in a complex wound was 4.4 times higher for pit bulls compared with the other top-biting breeds.”

Canine researcher Alan Beck at Purdue University says there is a reason pit bulls are more dangerous when they bite.

“Part of the breed-specific behavior of the pit bull is to bite and hold,” Beck said.

He says a second unique behavior trait of pit bulls is they don’t give warning signs before attacking.

“The vast majority of families interviewed after a fatality has taken place is that they had no idea, the dog was just absolutely fine. And the truth of the matter is, most pit bulls are fine,” Beck said.

Martin said she personally owns six dogs including a pit bull and believes a dog’s environment and how they are managed to influence how they behave more than anything else.

“What we know about bites, I think, is un-neutered male, testosterone-driven dogs are involved in bites more frequently than not,” Martin said.

Veteran dog trainer Steve Zorn of Phoenix Dog Training has spent his life rescuing and training dogs with unruly behavior. He does not consider pit bulls unique from other dogs.

“I think there are certainly misconceptions about them,” Zorn said.

He points out that other breeds, such as the German Shepherd, have stronger bites overall. He said he has rescued hundreds of pit bulls in his career and owned several. Zorn said no dog should be left alone with a child, no matter the breed and he compares owning a dog to owning a gun.

“If you are not willing to take the responsibility to raise, train and manage that dog properly, then don’t own one,” Zorn said.

Some argue banning pit bulls altogether reduces the risk to the public. Thirteen countries and more than 900 cities and counties in the U.S. have bans or strict regulations in place for pit bulls and to a lesser extent, Rottweilers.

However, some communities have lifted the bans, concluding they were not effective and instead drove many pit bull owners underground.

Martin said she has not seen evidence that suggests breed-specific legislation (BSL) is effective in protecting the public from dog attacks.

Arizona has a law in place that prevents local governments from implementing BSL.

An inherent problem with bans is that pit bulls are technically not a breed and often have DNA of many breeds, Martin said.

Why so many unwanted pit bulls?

About three-quarters of dogs in the county’s shelter are pit bulls or pit bull mixes, Martin said.

Martin says the overpopulation of pit bulls is a problem in shelters nationally.

“This is an angst-filled, very problematical gray area that the entire country is grappling with,” Martin said.

Martin believes the primary cause of their plight is poverty.

“If we don’t address the effects of poverty on companion animals we’re going to be in this roller-coaster forever,” Martin said.

Over the past year, the county has been focusing education efforts and hosting spay and neutering events in the 85009 zip code, a patch of southwest Phoenix with older, low-income neighborhoods.

It’s where many yards are meticulously maintained, even if homes are worn down, and where a high concentration of pit bulls are routinely found stray or turned over to shelter employees.

“The females go into heat, have big litters of 8-10 puppies. The neighbors hand them out to other neighbors and all of a sudden those little dogs have puppies and things just kind of explode,” said Animal Control Officer Starla Clark, who leads a group of officers and volunteers canvassing streets and handing out fliers of free spay and neutering events.

“Most everybody is thrilled to find out it doesn’t cost anything. We will even go pick them up if we need to because a lot of people don’t have transportation,” Clark said.

Many new pet owners aren’t prepared for the financial obligations of having a dog, and often don’t understand the importance of spaying and neutering their dogs. Complicating matters, many of the homes have low fences which means when dogs grow up they roam the neighborhood and impregnate other dogs, Clark said.

Search Craigslist for “pit bull puppies” in the Phoenix area and there are a handful of options. Breeders across the Valley sell litters of pit bulls and pit bull mixes for between $100 to $250 each.

But some breeders are less knowledgeable than others.

Eric Garcia of Tempe was selling a litter on Craigslist as a favor for his boss at work. When Garcia met with 12 News for an interview, he had sold four of the nine puppies. The remaining five were huddled together whelping, all white with black patches. They were just six weeks old. The mother was taken away from the puppies and sent to Mexico when the litter was just four to five weeks old because she was acting too aggressively towards people, Garcia said.

As a general rule, puppies should stay with their mothers until the 8-12 weeks-old, according to the American Kennel Club. Adopting out puppies before they have been properly socialized by their mother and siblings can set them up for behavior problems and abandonment, experts say.

Garcia told 12 News he didn’t think it was a problem that the mother of the puppies was already absent at four weeks.

“She was too mean. She had to go,” Garcia said. “I hope they (puppies) go to a good home. They deserve it.”

Such practices are looked down upon by experts. Zorn says too many people want pit bulls simply for how they look.

“One of the worst things that we have is a lot of people breeding these dogs that have no business even owning a dog,” Zorn said.