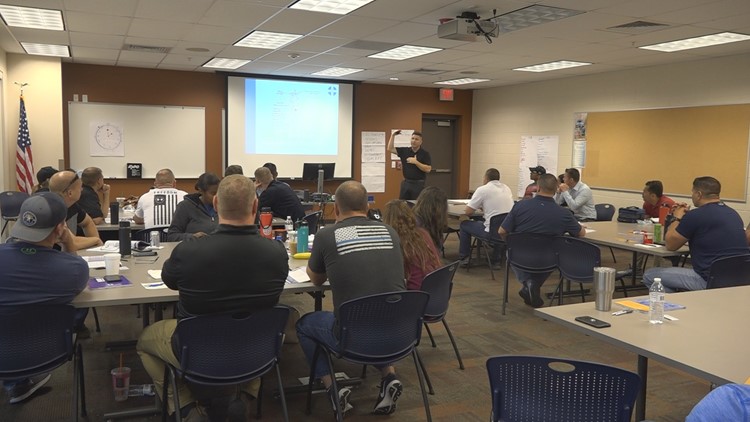 The Phoenix Police Department is beginning to increase behavioral health training for officers.

On Friday, the first group of officers started the program.

"A lot of the calls they respond to are mental health-related," Sgt. Gates Townsend, with Phoenix PD's Crisis Intervention Team, said.

Townsend said this training is meant to help patrol officers de-escalate situations when someone is dealing with crises like anxiety, psychosis or drug abuse, among others.

"A person that's in crisis, it's unpredictable how they're going to respond. So the quicker the officer can bring that person down emotionally, the more cooperative they are and the easier they are to communicate with," Townsend said.

Last year, the Phoenix Police Department had 23 fatal officer-involved shootings, more than any other large department in the U.S.

This year, there's been far fewer shootings, and the department is still in the spotlight.

This training is part of an action plan created after community outrage in June.

"We constantly are evolving with what the community needs and with as our chief talks about the transparency of our department and just allowing our officers to be equipped with the best knowledge possible to do their job," Townsend said.

The goal is safety for both citizens and officers.

"This is evidence-based training," Jim Kirk, National Trainer with the National Council for Behavioral Health said. "So there's measurable outcomes, which individuals that go through this training are more apt to seek help and are more apt to get somebody to seek help."

Every single patrol officer is set to go through the eight-hour training. The department hopes to have all roughly 1,100 officers through the program over the next two years.