The Phoenix Police Department had 44 total officer-involved shootings in 2018 after averaging 21 per year from 2009-2017. 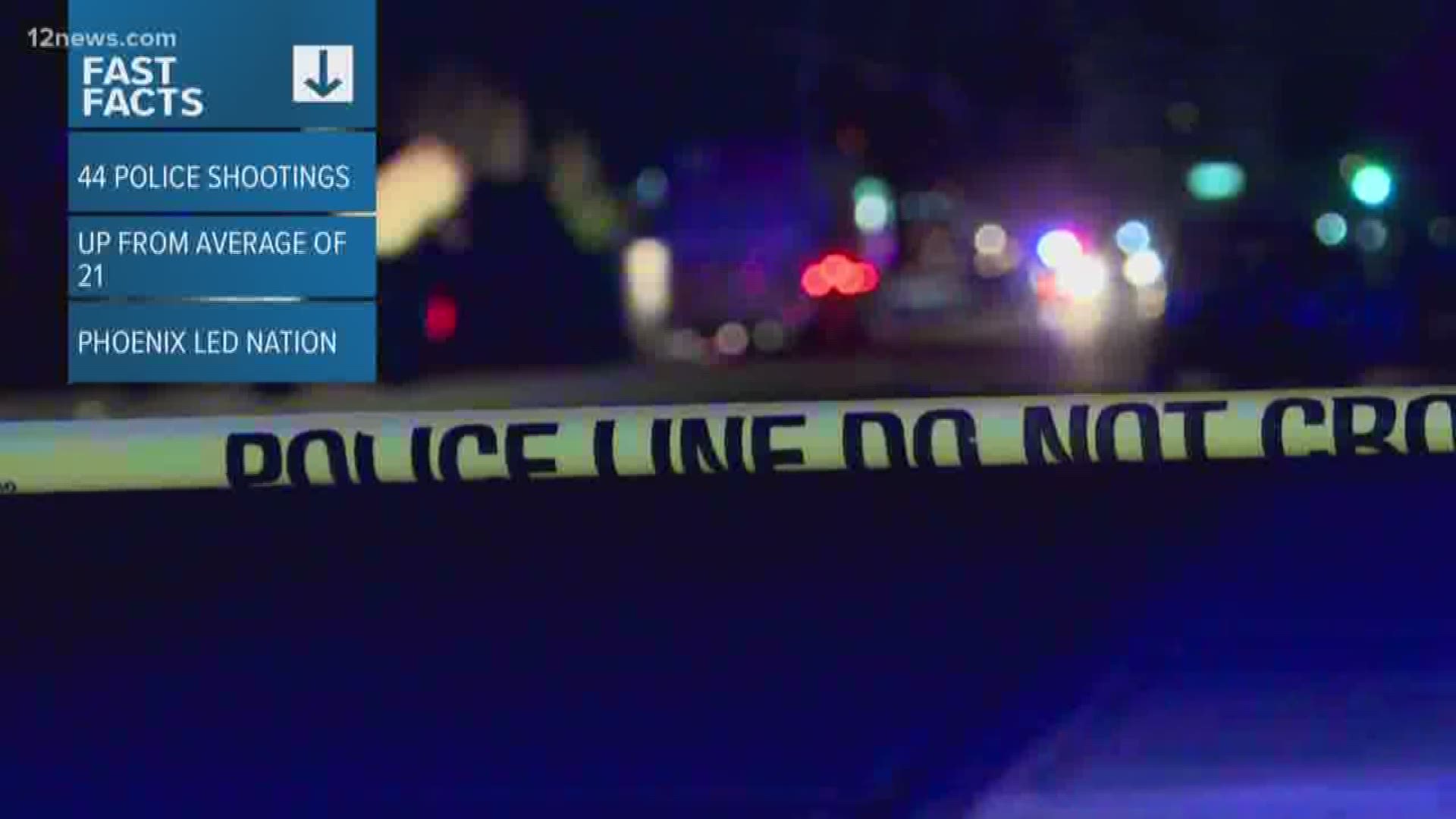 PHOENIX — Phoenix police released the findings of a study on the 2018 officer-involved shootings (OIS) from the department Friday. Police Chief Jeri Williams joined Mayor Kate Gallego and other officials to discuss the findings by the National Police Foundation.

During the news conference, Mayor Gallego said the release of this study is just part of the process of learning more about this issue.

"Today is not the first step in this journey, nor is it the last," Mayor Gallego said. "The Phoenix Police Department has already been working hard on these safety issues."

Gallego added that the police department has dramatically changed how they train their officers, moving from a military-style training to training that uses reality-based scenarios focusing on problem solving. 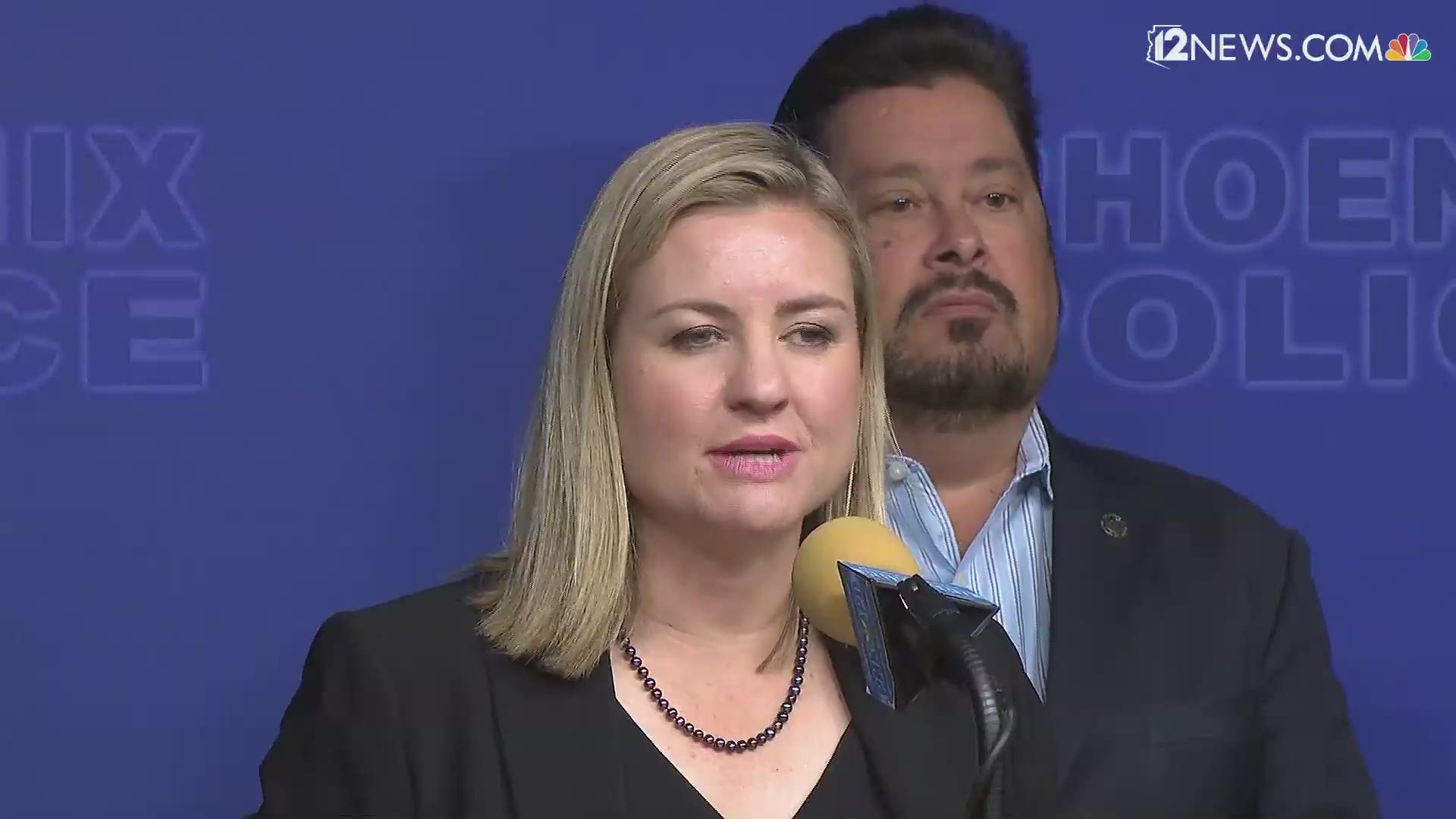 The National Police Foundation study, performed at the request of the Phoenix police, outlined context related to the Phoenix officer-involved shootings spike in 2018 including potential attributable factors the spike.

The report compared Phoenix PD to other department and statistics in cities across the country and compared statistics from 2018 to average department statistics from 2009-2017. It also discussed opinions gathered from community members and officers and supervisors on the Phoenix police force on what caused the spike and how officer-involved shootings could potentially be reduced.

The most significant characteristic separating 2018 officer-involved shootings, or OIS, numbers and those from 2009-2017 was that 75 percent of OIS suspects in 2018 were armed with firearms, compared to an average of 52.3 percent in 2009-2017. This means suspects shot by Phoenix PD officers more frequently had a gun than in previous years, the report says.

The report notes that Phoenix PD struggles in retaining officers, like many other departments in the U.S. There was an increase in recruitment to the department in 2015. The number of officers on the force in 2015 was 2,692 and in 2018 was up less than 200 officers to 2,890.

Phoenix is the most populated city in Arizona and the fifth most populous city in the U.S. Between 2017 and 2018, Phoenix was second in population increase among U.S. cities, per the census bureau.

How Phoenix PD compares to others

The report cites The Washington Post’s “Fatal Force” data, collected since 2015, which documents all known times an officer shoots and kills a civilian. Phoenix PD substantially led the numbers in the U.S. with 23. The Los Angeles Police Department was second with 14.

The study compared the 20 agencies with the highest number of fatal OIS in 2018. Phoenix PD’s jurisdiction serving 1.6 million people is closest to Austin PD, Honolulu PD, San Antonio PD jurisdictions, but those departments ranked 15, 16 and 18, respectively in fatal OIS per 100,000 population.

“This suggests that PPD’s 23 fatal shootings in 2018 were not merely a function of it being a large city,” the report says.

As noted earlier, Mesa PD had seven fatal OIS and Tucson had six in 2018.

The report says the Buckeye, Chandler, Gilbert, Goodyear, Mesa, Peoria, Scottsdale, Surprise and Tempe police departments all were involved in more OIS in 2018 than 2017.

The report says that data from the Maricopa County Attorney’s Office shows that even with Phoenix PD’s OIS number of 44 excluded, Maricopa County still experienced more OIS in 2018 than in 2017.

In focus groups with officers and interviews with community members and organizations, the National Police Foundation report said mental health was a theme in potential reasons for OIS increases, for different reasons.

The report notes that Arizona ranked 39th in the U.S. for overall ability to address mental health issues by national nonprofit Mental Health America in 2018. Arizona ranked 25th in prevalence of mental illness, but 42nd in access to care.

In a 2016 report by the Phoenix Mayor’s Commission on disability issues, 405 Phoenix PD patrol officers and 244 community members who experienced a mental health crisis were surveyed. In 2016, 44 percent of officers said they have received training on interacting with people with mental health issues within the last year, but 22.5 percent had either never received that training or at least not in the previous four years.

When community members were asked, 45 percent said the officer(s) made the situation worse and 51 percent said officers took them to jail.

Five police focus groups were conducted for the report, which included 27 Phoenix PD officers. The report says the first theme that surfaced in all groups was that one of the largest changes in recent years is the increase in dealing with people with mental illnesses.

Furthermore, Phoenix Mayor Kate Gallego addressed this in an interview with 12 News on Friday. The mayor said police and fire responded to more than 4,100 suicide calls in the last year, a number she found striking. That averages to more than 11 per day.

Gallego said she would like Phoenix to be able to do what some other communities around the country do on calls involving mental health where not only officers go to the scene, but mental health professionals as well.

“We cannot expect our police officers to have a Ph.D in mental health, it’s not realistic that we’re going to be putting Ph.D’s out everywhere on the street, but we can do a lot more to get people with specialized training,” Gallego said.

What else community members and officers said

In interviews with community members and organizations, the National Police Foundation ask, “how did we get here.” The community noted the “Joe Arpaio effect” related to former Maricopa County Sheriff Joe Arpaio (while to community acknowledged MCSO and Phoenix PD are separate entities) and his zero tolerance approach, which included a hardline approach on immigration enforcement and allegations of racial profiling has partially led to struggles between police and community in the Valley.

The community cited insufficient training for officers that doesn’t properly educate officers on alternatives to deadly force in certain scenarios. The community also said there was a lack of accountability within Phoenix PD and for officers involved in OIS in the court system. 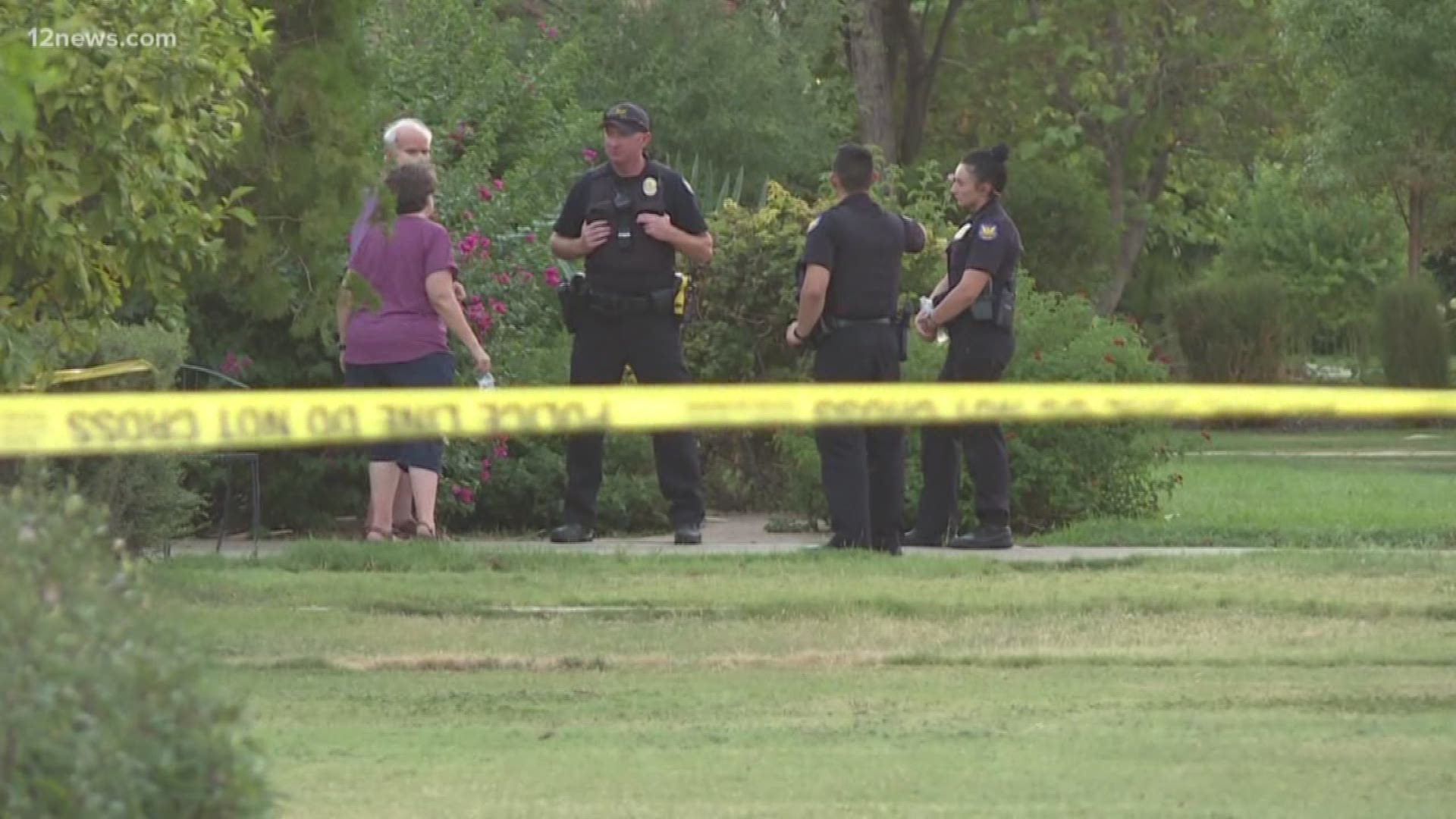 Some officers said a big difference in recent years is the prevalence of social media, which they feel has perpetuated negative stories about police leading to an anti-police rhetoric, increasing the likelihood of escalated situations.

“It has become more difficult to establish rapport with people because right out the gate, they didn’t trust you,” one officer said according to the report.

Supervisors said officers are trained well at de-escalation, but there are too few officers and more are needed. The report says none of the officers in the report’s OIS-experienced focus groups mentioned a lack of officers as a reason for an increase in OIS.

Along with the findings from researching the 2018 officer-involved shootings, the NPF also offered nine recommendations for the department moving forward. Here's how they all break down. 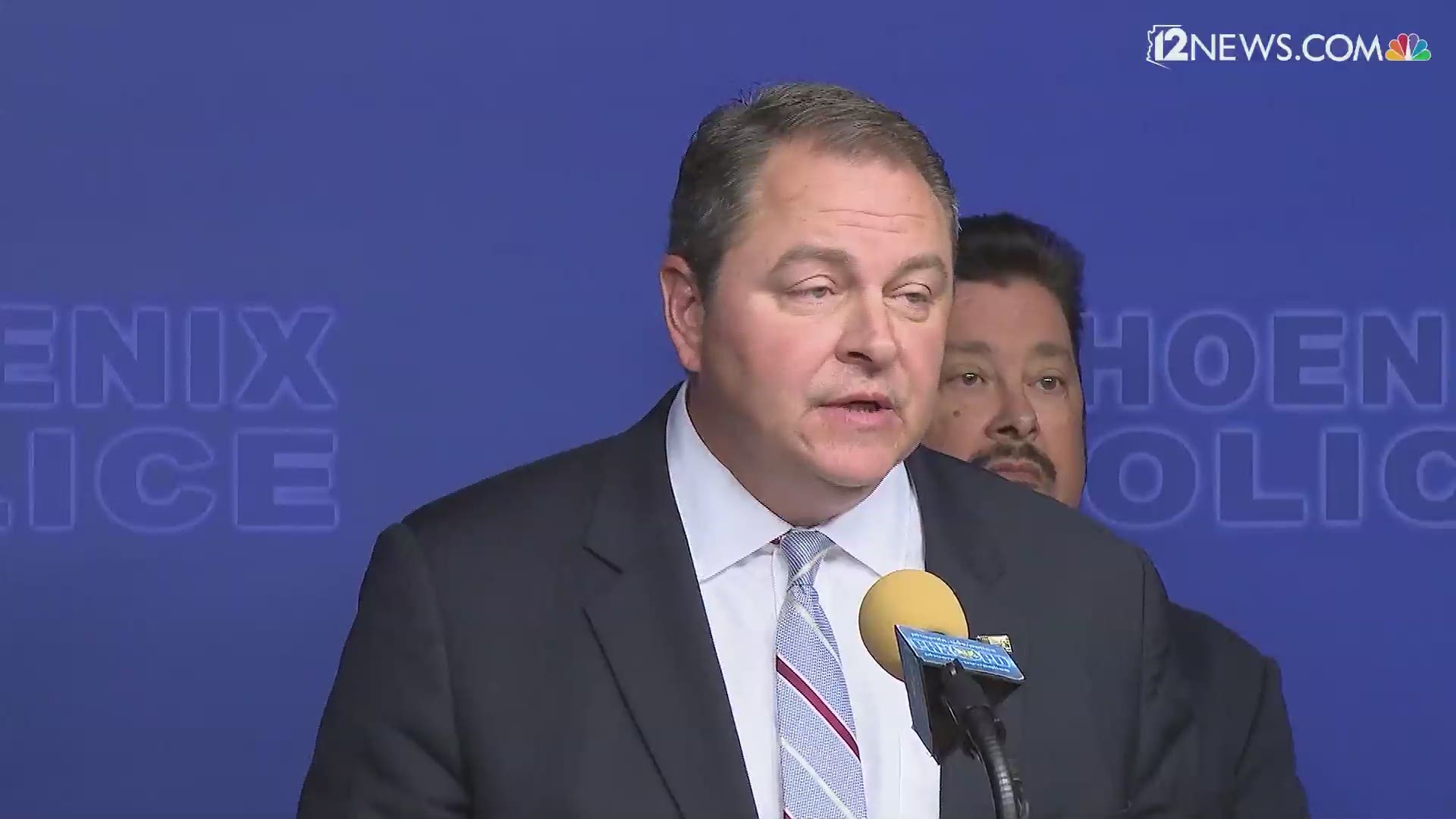 You can find the full report and recommendations here.