'If he lifts that gun up anymore, I'm shooting him': Body-worn footage shows tense confrontation before fatal shooting of James Garcia

James Garcia was shot and killed by Phoenix police officers on July 4. 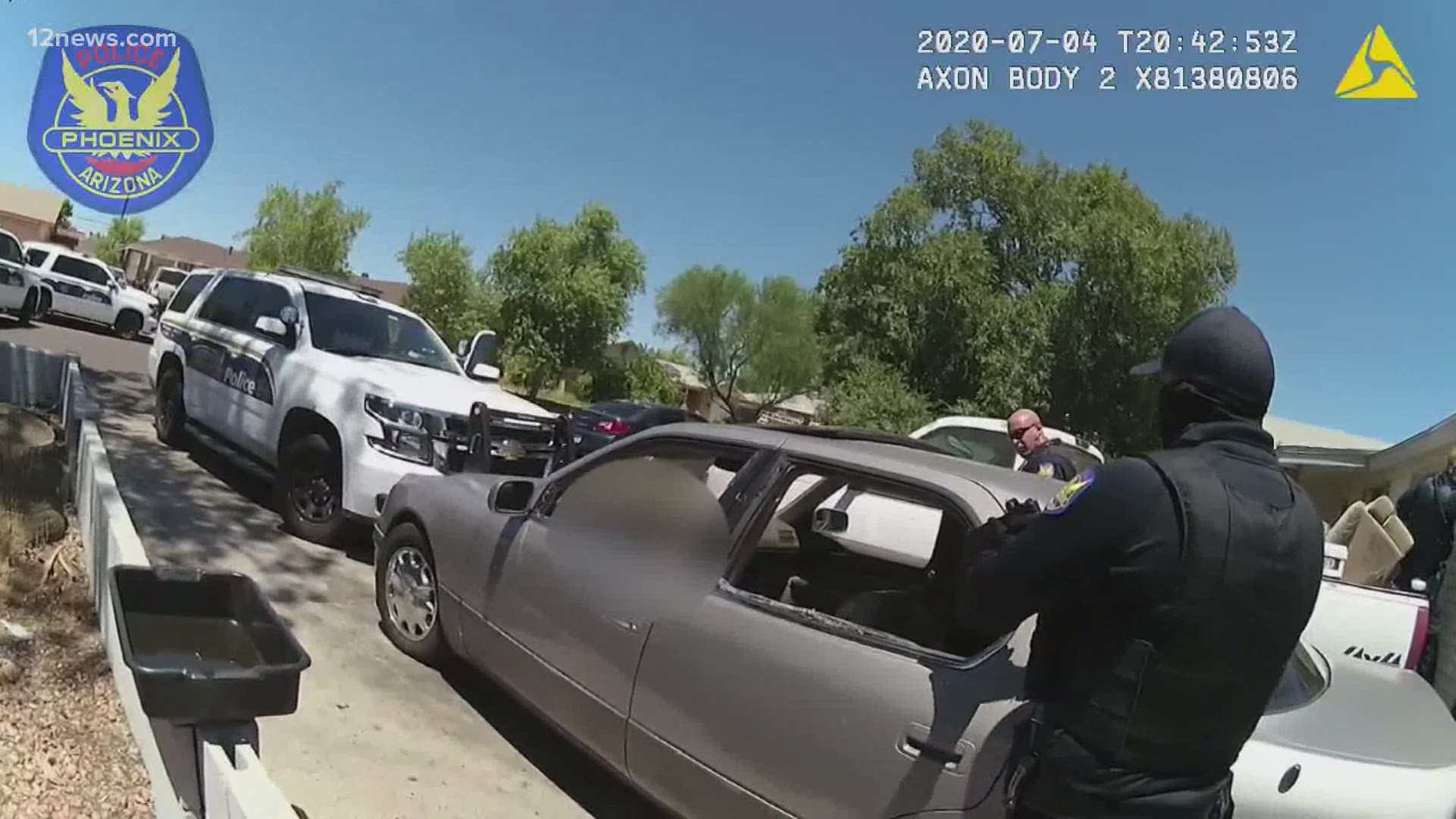 PHOENIX — The Phoenix Police Department released more edited body camera video from the July 4 shooting of James Garcia, when officers shot and killed the 28-year-old in a Phoenix driveway.

The video released Monday began with a taped 911 call from a man who said he was stabbed with a knife and that the man who stabbed him was threatening him again.

The caller, who was not identified, identified the suspect as Eric, a 28-year-old, 5-foot-4, skinny Hispanic man. It was not immediately known whether that suspect was Garcia.

Officers arrived at the home where the caller said one man had a knife and the other had a gun.

Just before 1:30 p.m., officers made contact with Garcia, who was inside a vehicle that was parked in the driveway of the home near 56th and Glenrosa avenues in west Phoenix.

An officer tapped on his car window when Garcia told him that he was waiting for his cousin who was inside the house.

The officer attempts to get Garcia out of the vehicle and over to a safe area. The officer told Garcia that they were identifying a crime at the house.

Garcia then gave the officer a fake name and admitted to having a misdemeanor.

The officer tells Garcia that they got reports that someone was stabbed in the house and that they had to get everyone out of the area.

They continue talking, then Garcia rolls up his car window.

The officer then notices that Garcia has a gun. At least three officers are seen pulling their weapons on Garcia.

"Get your hands off the [expletive] gun!" the officer continues. "If he lifts that gun up anymore, I'm shooting him."

Even after shooting him multiple times, officers continue to shout commands at Garcia.

"Let me see your hands! Get your [expletive] hands off the gun!"

Another officer came on the scene to remove a gun from Garcia's lap and get him medical aid. Garcia eventually died of his injuries.

The gun is never seen in the body camera video prior to the shooting. Less than a minute passes from the time the first officer pulls his weapon to the time of the shooting. The three officers kept their weapons pointed at Garcia during that time. 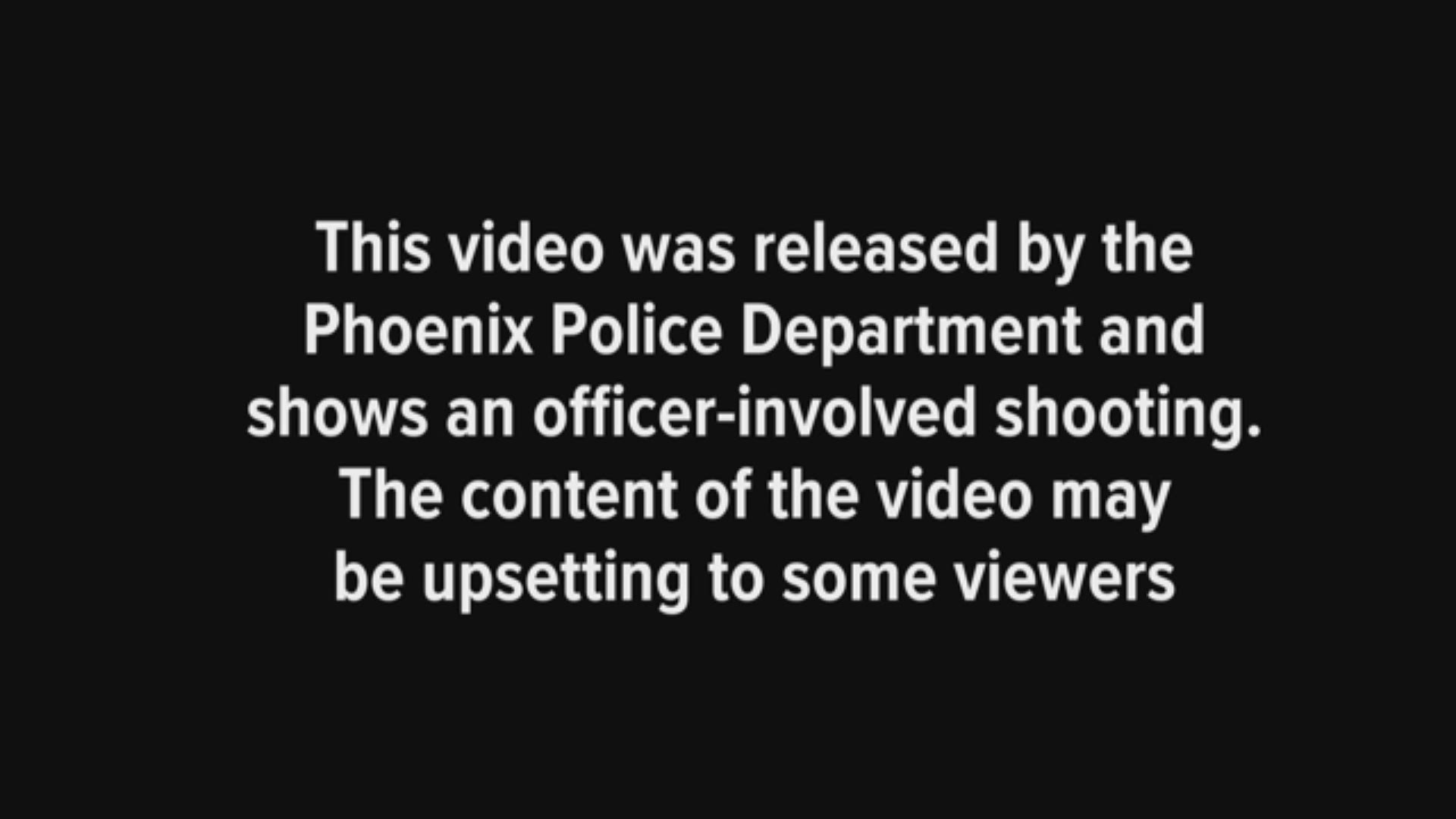 The two officers who fired their weapons were identified as Noel Trevino and Gregory Wilson.

All of the officers' faces in the body camera video were blurred but the officer who first confronts Garcia refers to another officer as "Trevino" later in the footage. They had been with the department for two or three years.

Garcia was on probation at the time of the shooting and was not allowed to possess a weapon.

The body camera video released Monday seemed to align with the department's events of the shooting.

The caller has not yet been identified. It was not immediately known who the suspect in the aggravated assault was. The caller identified the suspect as Eric, a Hispanic man who was skinny and about 5-foot-4.

Police said the person who called directed officers to a home and said the suspect of the aggravated assault was there. Officers contacted several people inside the home.

There was also a man in a vehicle parked in the home's driveway, that was Garcia.

According to the Phoenix Police Department, at some point, while officers were talking with Garcia in the driveway, he armed himself with a handgun.

Officers instructed the man to get out of the vehicle and he refused and rolled up his window.

Officers instructed Garcia to drop the handgun, but police say he would not drop the gun but began to lift it.

As he did so, two officers fired their weapons at Garcia in the vehicle.

Previous eyewitness video showed what was happening moments before the shooting.

Garcia was taken to the hospital, where he was pronounced dead.

Protesters marched around the Maryvale Phoenix Police precinct one day after the officer-involved shooting that killed Garcia.

Police Chief Jeri Williams asked the FBI to perform a civil rights review on the officer-involved shooting as the department released redacted, partial body camera video from after the shooting that showed officers recovering a handgun from the vehicle Garcia was in.

The July 4, 2020, CIB video has been released. During a 13 minute conversation, Garcia armed himself with a gun & refused to drop it. Garcia raised the gun toward an officer at which time officers shot at Garcia. To see the video please visit https://t.co/JMFPTUtXnw pic.twitter.com/NQ1mjAjtHP