A criminal pretending to be a police captain with a fake badge convinced an elderly Phoenix woman he needs help and sadly, she got roped into his scam. 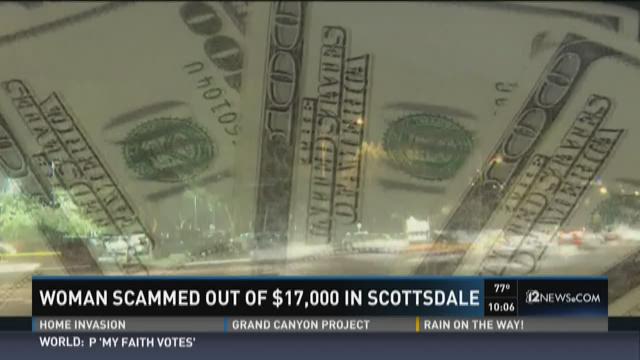 PHOENIX - A criminal pretending to be a police captain with a fake badge convinced an elderly Phoenix woman he needs help and sadly, she got roped into his scam.

12 News sat down with the victim as she shared the heartbreaking story.

The woman says the scam all started with a phone call and it led her to a bank at 44th Street and Camelback Road, where she ended up withdrawing thousands of dollars for the criminal.

"He told me my identity had been stolen," she said.

The 87-year-old woman asked 12 News to conceal her identity.

She told us the scammer called her on a Monday at noon and sounded believable telling her a woman has been spending her money.

"Buying high end things at Saks and over at the Biltmore," she said. "So we just want to alert you.”

The caller used many different stories to get her to withdraw money, including a story that all her cash in the bank was somehow counterfeit. She thought she was doing the right thing.

"Helping them get the people who are the bad guys," she said.

The woman agreed to meet the man at an auto parts store, where she handed over more than $17,000.

"I don’t think he even said thank you, he just took it," she said.

She later learned, the entire thing was a lie.

Sgt. Ben Hoster with the Scottsdale Police Department said police won’t ever call you up asking for money.

"They target the elderly, because that generation tends to be more trusting," Hoster said.

The victim told 12 News it almost felt like she had been hypnotized through all of this. Police say if you get phone call that doesn’t seem quite right, just call police.