Head To Toe Therapy has been at the center of more than just financial mismanagement issues since the pandemic began. 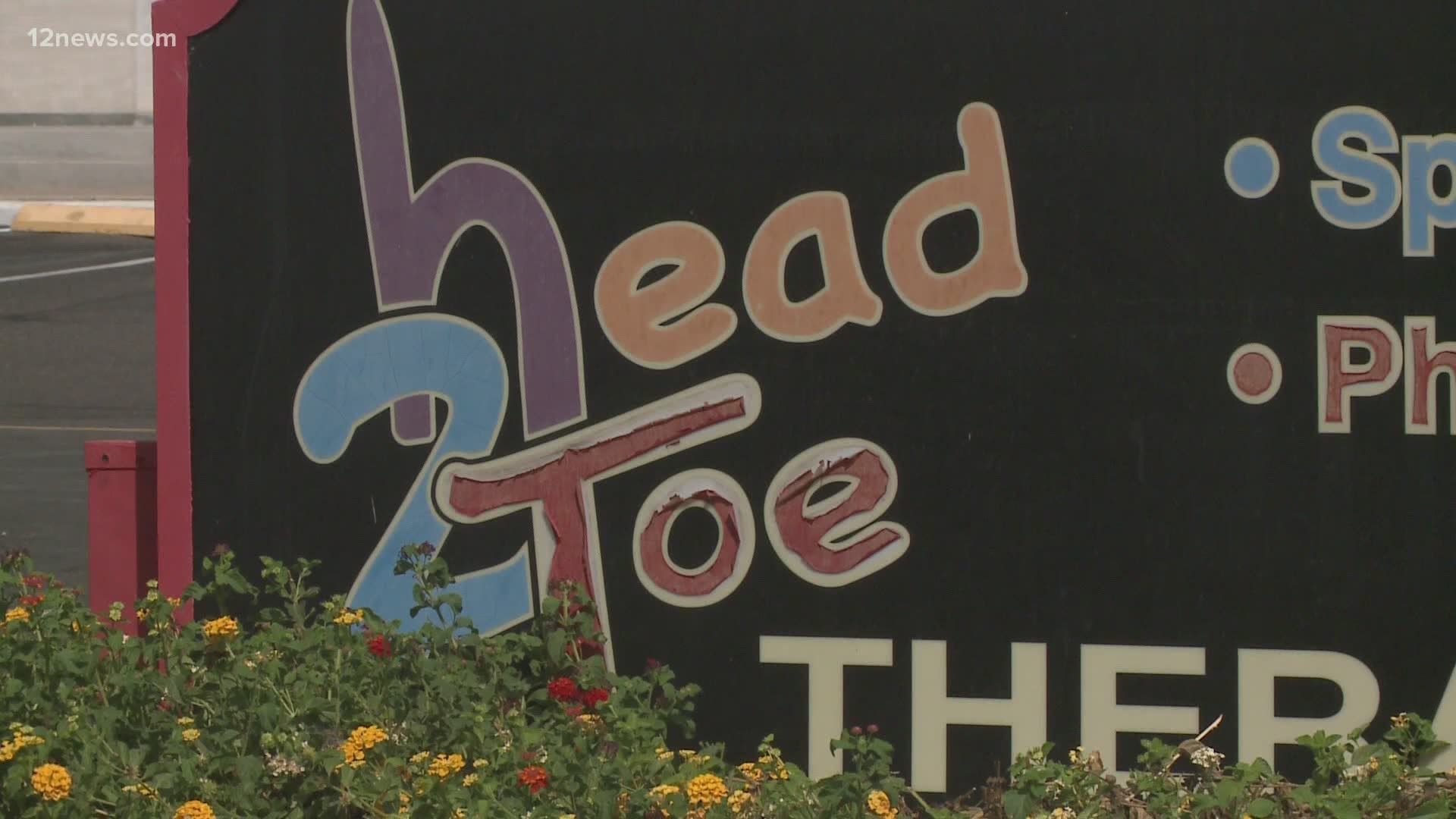 “Therapists across the board were experiencing the same thing, people were not getting paid for months and months,” Smith said.

Many of those therapists walked away and gave up. Others, including Smith, fought for their money and eventually forced Head To Toe therapy to pay them what they were owed.

But the company’s problems were about more than just financial mismanagement.

Last November, the state cut off payments from the Division of Developmental Disabilities for Head To Toe, accusing the massive clinic and its owner Bridget O’Brien of billing for services not provided, creating false documents, and using unregistered and unlicensed providers.

Public records now reveal the company received a Paycheck Protection Program loan of between $1 to 2 million.

“I’m furious,” said Lorri Cordova, a parent who watched how Head To Toe operated for several years before it was kicked out of a San Tan location for failure to pay rent.

Cordova filed grievances with the Division of Developmental Disabilities against Head To Toe and says she doesn’t believe the company will spend the money to save full-time positions as the program is intended.

Under the provisions of the PPP program, Head To Toe’s loan is forgiven if the money is used for expenses like rent and utilities and if at least 60% of it goes towards payroll.

“There should have been background checks on these companies. Obviously, nobody is doing that for them to be handed over this large amount of money,” Cordova said.

According to the treasury department documents, Head To Toe told the government it would pay 14 full-time positions with the PPP funds.

12 news asked O’Brien to list the positions she is paying for with PPP money for the sake of transparency.

O’Brien declined to be interviewed, and an attorney representing the business will not provide the information to 12 news.

“My client has been the subject of hostile attacks from competitors in the therapy industry,” said attorney Olen Lenets. “Operating procedures, internal protocols, as well as personnel records are confidential and do not belong in the public realm.”

Lenets added that Head To Toe is “utilizing the funds for qualified purposes as specified under the Paycheck Protection Program rule.”

12 news also asked O’Brien to explain why her company is justified by receiving bailout money.

Lenet also declined to provide that information, stating, “if Head To Toe’s assurances to the bank and federal government were sufficient…they should be sufficient to the public as well.”

Read the full statement from Head To Toe here.

ASU economist Dennis Hoffman says some businesses could get forgivable loans that under different circumstances might not qualify.

“This is a pandemic, this is unprecedented. I think the government’s position here is to err on the side of, ‘Hey, let’s just get the dollars out into the economy,’ rather than worry about whether or not the dollars were allocated to the utmost efficiency,” Hoffman said.

Smith is skeptical Head To Toe will spend the loan in good faith.

“These kids are some of the most innocent and vulnerable in society and this company was just using them,” Smith said. “the fact they’re getting millions of dollars when they weren’t paying their own employees for months and months is really scary.”

Head To Toe tells 12 news it continues to cooperate with the state’s investigation.

That investigation could result in a variety of outcomes, ranging from the suspension being lifted and restoration of DDD funding to the auditor general recommending to the attorney general’s office that criminal charges be considered.

Read the full response from the attorney representing Head To Toe Therapy below:

RELATED: Details released about alleged fraud at clinic for children with disabilities