The fire ignited near 36th Avenue and Lincoln Street, the Phoenix Police Department said. Officials are working to determine the cause. 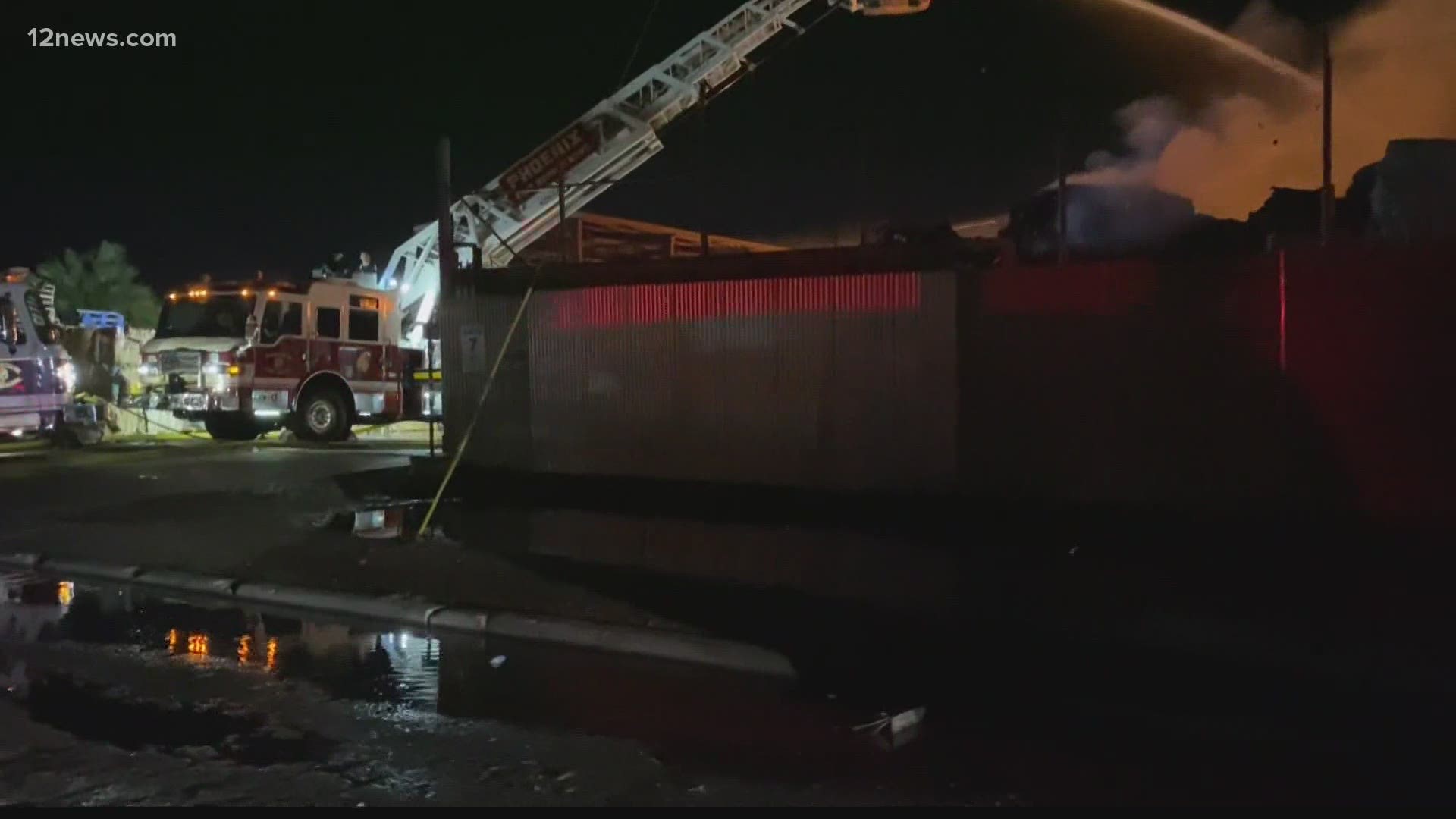 PHOENIX — Firefighters worked to extinguish the last hotspots in a fire on Monday that spread through multiple recycling yards in south Phoenix Saturday afternoon, the Phoenix Fire Department said.

The fire produced large amounts of smoke that could be seen throughout the Valley. The fire ignited near the intersection of 36th Avenue and Lincoln Street and was labeled as a Type 1 fire, firefighters said.

Phoenix Fire said they first received reports of a small junkyard fire in a recycling yard around 12:30 p.m. near the intersection.

According to officials, the fire was quickly upgraded to a TYPE 1 fire with more than 200 firefighters battling the flames, 10 mutual agencies were also assisting. One firefighter reportedly suffered a non-serious injury to the lower extremities, but it is not life-threatening. Type 1 fires are typically associated with wildfires.

Crews were on scene throughout the night using front end loaders to extinguish active hotspots. 35th Ave from Buckeye to Van Buren will remain closed. We ask you to please avoid the area. pic.twitter.com/VXQKL1TeY9

On Sunday, Phoenix Fire Captain Todd Keller said that this is not the first fire to happen at this specific yard or others in the area.

Captain Keller explained that once the fire catches at a recycling facility, it is easily spread through compacted materials like cardboard, paper and other flammables. There has been no determined cause at this time.

Phoenix Fire will turn the scene over to the waste management group once it's secure for further cleanup.

Captain Keller said that the fire extended about a quarter-mile at the height of its activity.

The Phoenix Fire Department said that the response to the Recycling Yard Fire is the largest in the department's history.

Two men heading back from Payson could see the plume of smoke in southwest Phoenix.

The fire is now classified as a Type 1 Incident, typically seen in wildfires. More than 200 firefighters on scene, 10 agencies. @12News #12News https://t.co/fQEIVG5Aev pic.twitter.com/rZbNkBzmJE

Road closures remain in effect from Washington Street to Buckeye Road and 35th to 39th avenues as crews battle the nearby recycling plant fire.

Road closures in effect approx. Washington to Buckeye, 35th Ave to 39th Ave due to a fire being worked by @PHXFire near 36th Avenue and Lincoln. Please stay out of the area. pic.twitter.com/WHBlrTfwX5

Some residences and commercial buildings were evacuated due to the fire, Captain Keller said that two or three businesses were damaged.

According to APS, 155 customers in the area were without power due to the fire for about 10 hours.

Wind caused issues with firefighting efforts, with speeds at 20 mph, according to 12 News Meteorologist Kristen Keogh.

Authorities asked people to stay away from the area. The fire was threatening five buildings in the area, firefighters said. The smoke plume was so big, it could be seen from space.

The Phoenix Fire Investigation Task Force is working to determine the cause.

"As you are aware, there was a fire at our Phoenix recycling facility on Saturday. We are very thankful that no one was injured, and the Phoenix Fire Department was quick to respond. Even though our plant is damaged, our service infrastructure remains intact and we are open and servicing every single customer today. The cause of the fire has not yet been determined by the Phoenix Fire Department."

The smoke plume from yesterday's fire at a #Phoenix recycling plant was visible from space. #azwx pic.twitter.com/SmsB7d2flF