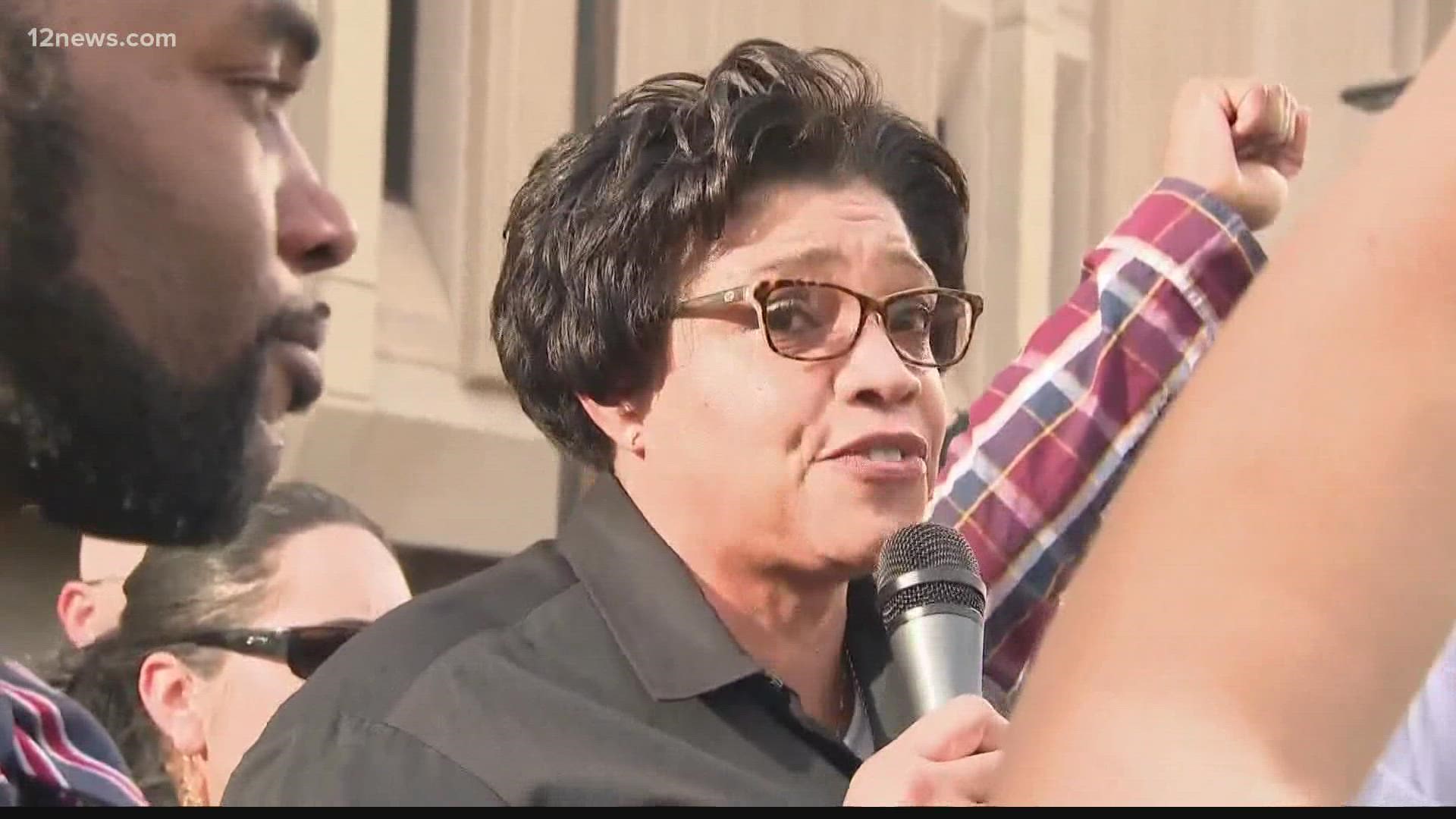 PHOENIX — Phoenix police had “no credible evidence” to charge protesters at a Black Lives Matter rally as members of a criminal street gang, and police commanders were aware there was “a lack of merit” to the charges, according to a 52-page independent report ordered by Phoenix City Manager Ed Zuercher.

“Law enforcement ignored the obvious problems with the information it received,” according to the report, by the Phoenix law firm of Ballard Spahr.

Fallout from the report was swift. According to Zuercher:

One reason for that request: a lack of cooperation from Phoenix police officers and commanders that investigators say hindered their work.

The felony charges against 15 protesters at the October 2020 rally were ultimately dropped.

But their cases have enmeshed the Police Department and Maricopa County Attorney Allister Adel in a rolling scandal that has spawned lawsuits, a U.S. Department of Justice investigation, and disciplinary action at the police department.

Chief Was Kept Unaware of Charges

The report suggests that Williams was kept in the dark about the protest investigation.

The report says Williams was not informed of the decision to charge protesters as members of a criminal street gang until after the felony charges were presented to a grand jury.

“Development of the gang charges appears to have occurred entirely outside of normal and appropriate channels,” the report says.

Among the problems the report points out is the police department's decision not to involve its gang-enforcement unit in what was characterized as gang-related activity, but still bring information to a grand jury that named arrested protesters as gang members.

Three assistant chiefs who attended a meeting Oct. 23, 2020, to review the charging decision have all been reassigned to their previous roles as commanders. According to the report, all three were present at a meeting where decisions to charge or enhance charges were made.

The three assistants - Gabriel Lopez, Lawrence Hein and John Collins - were the highest-ranking representatives of Phoenix PD at the meeting.

Fourteen Phoenix police representatives were at the meeting, with Maricopa County prosecutors and an FBI agent.

The report also raises questions about Adel’s private and public statements about the protesters’ arrests, as well as the Police Department’s two-month delay in disclosing to investigators a critical letter from Adel.

In a six-page letter to Williams on April 19, the report says, Adel outlined “several areas of concern” about police officers' conduct in the protest investigation.

Publicly, however, Adel said on June 11 that her decision to drop all charges against the protesters “in no way reflects negatively on the hard work” of the officers at the protests.

The county attorney's office declined to participate in the investigation.

"We made several requests to MCAO for information, interviews, and written responses to our questions. Those requests were declined," the report says.

The report on the five-month-long independent investigation sums up what happened:

"Police began considering anti-police protestors generally as 'criminal street gangs' based upon statements by a source of highly questionable credibility. From there, police and prosecutors orchestrated the criminal street gang case against the Protestors with inconsistent and inaccurate police reports, dubious Grand Jury testimony and deeply flawed (according to the Superior Court of Maricopa County, unconstitutional) legal conclusions."

The report’s chief recommendation: Another report is needed.

12 News has learned the city manager’s office has already begun the process of contracting with an outside entity for a follow-up investigation.

RELATED: Here's a timeline of Phoenix police cases that may be investigated by the Department of Justice

Zuercher also released the Ballard Spahr report on the so-called "challenge coin" issued to Phoenix police tactical officers who responded to protests in  August 2017 outside a Donald Trump rally in downtown Phoenix.

The coin was created and distributed by police officers to mark the widely publicized pepper-ball shooting of a protester in the groin.

One side of the coin plays off a Trump slogan: “Making America Great Again One Nut at a Time.” The other side had a slogan that critics linked to hate groups: “Good Night Left Nut."

Zuercher said there was no evidence officers behind the coin knew about that.

An internal city investigation could lead to employee discipline.

Chief Williams testified in a court case two years ago that she was aware of the coin but did nothing about it.

Zuercher said he had issued a written reprimand to Williams for "lapses in executive leadership."

The reports issued Thursday won't be the last word on the investigation of the charging decisions or the police response at the Trump rally.

The U.S. Justice Department has included both events in its recently announced investigation of the police department and the City of Phoenix.

Phoenix Mayor Kate Gallego issued this response to the investigation:

“I’m disheartened and deeply disappointed by the findings of this investigation. The behavior described falls far below my expectations. More importantly, it fails to meet the expectations of our community.

"The recommendations, policy changes, and disciplinary actions the city is taking are necessary first steps in addressing these issues. The safety of our community is of the utmost importance. More needs to be done to restore confidence and have a successful Phoenix Police Department.”