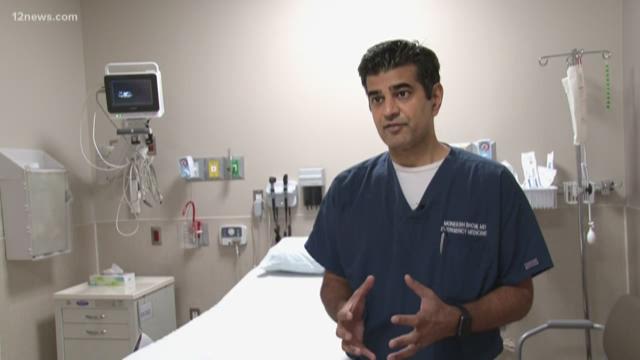 There's Uber for on-demand rides. We have on-demand food delivery. Why not have an urgent care visit on demand too?

That's the premise behind Dispatch Health, a mobile service that brings health professionals into your living room.

When you call them, either a physician assistant or nurse practitioner and a paramedic arrive in a Prius carrying seven cases of medical equipment that include everything from IVs, lab tests to test for infections, an orthotic kit for broken bones and much more.

"It's really packaging up about 60 to 70 percent of the emergency department, but putting it in a Prius and bringing it to your home," said Wagner.

Dispatch Health was created to help with minor emergencies like stitches, broken bones, the flu and other things you would go to urgent care for.

It's meant to save you time and money waiting in a busy urgent care.

An bill runs an average of $200-$300, whereas the average bill for an emergency room visit can be in the thousands.

Dr. Moneesh Bhow, the director of the emergency department at Banner University Medical Center in Phoenix said he thinks a mobile service can be a valuable resource, but he adds there are some things he would tell people to go straight to a hospital for.

"Especially illnesses that are time sensitive, life or limb threatening. Those you want to get into an emergency room, and in front of a physician as quick as possible," said Bhow.

If a patient is experiencing symptoms connected to either one of those, Wagner said their dispatch center would tell the patient to call 911 immediately.

Dispatch Health started in Denver and came to the Valley in mid-August, so at this point they only accept the following insurances:

They are looking to add more plans in the near future.