New lights were put up in late March at Chaparral High School after an anonymous donor fronted the money. But neighbors say the lights are too bright. 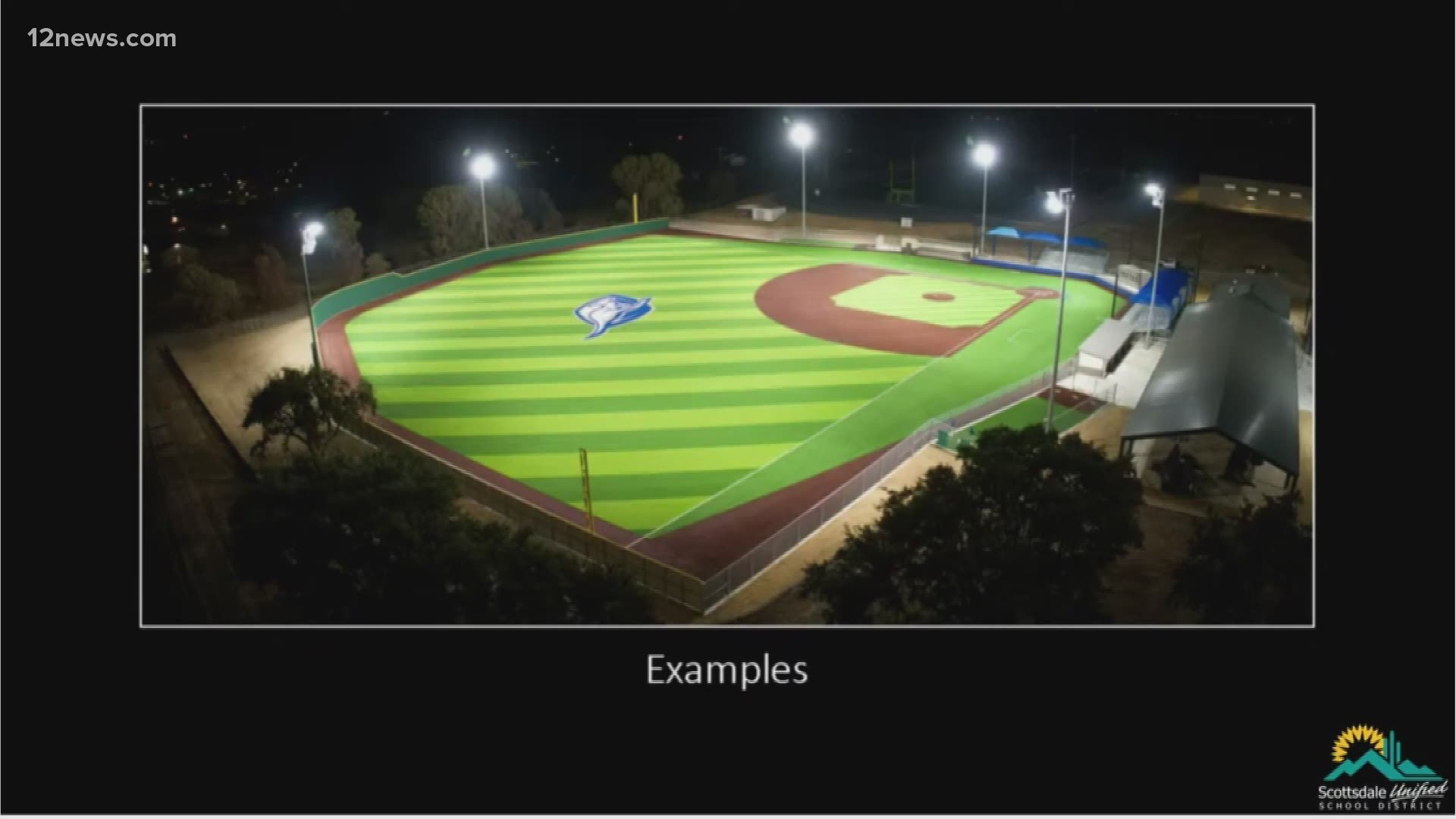 SCOTTSDALE, Ariz. — Neighbors near Chaparral High School say the new lights put up on the baseball and softball fields are too bright and are calling on Scottsdale Unified School District to do something about it.

An anonymous donor paid for the lights

Scottsdale Unified School District's governing board accepted an offer from an anonymous donor to fund the new lights on Chaparral's baseball and softball fields in January.

"We do not know who the individual is who is making this incredible donation," Todd Dreifort, the principal at Chaparral High School, said.

According to the district's board meeting, the donor put up about $500,000 to fund the new lights.

During the meeting, Dreifort mentioned potential benefits to having the lights installed, including student-athletes not missing as much class time, parents and fellow students being able to attend games easier, athletes not having to play in the heat of the day, and potentially renting out the fields when they're not in use to other organizations.

A district spokesperson tells 12 News the lights were installed in late March.

Neighbors say the lights are a problem for surrounding homes

Since the lights were installed, neighbors claim they have caused problems in their neighborhood.

"We can’t put the kids to bed because it lights up the whole backyard," Parisa, a neighbor located near the high school said. Parisa said she didn't want to give her last name for fear of retaliation.

According to a district spokesperson, the lights should be turned off by 9 p.m. on game days.

"We love living next door to a baseball field, it’s always a wonderful sound during the day, but now we have games until late in the evening," neighbor Melissa McCusker said.

"At night my entire backyard is, you know, completely lit up," R.J. Crosby said.

Crosby said his home backs up to the fields. He bought the home back in October.

"Now I've got five large poles with lights sticking up and there's no question, it's going to impact my property value," Crosby said.

Some neighbors, including Crosby, told 12 News they want to know more about the anonymous donor and why they're donating the money.

Neighbors feel they didn't know the lights were coming

During the board meeting where the lights were approved, Dreifort said notices were mailed to everyone within a half-mile radius of Chapparal High School, in addition to social media and other posts, inviting them to a virtual meeting about the lights.

"Our home was one of the very few homes that received the postcard," McCusker said.

McCusker said she did attend the virtual meeting.

"It was a, what I would refer to as, just a sales pitch to see what the lights would do,' McCusker said.

Dreifort told the SUSD governing board one of the biggest issues neighbors brought up was how far the light would spread into the neighborhood.

"I think their concerns were put to rest just by speaking with Qualite and seeing some of these pictures," Dreifort told the board, pointing to pictures Qualite, the company who installed the lights, provided.

The district also told 12 News notices and agendas were posted in accordance with Arizona's open meeting law for the meeting where the governing board unanimously decided to accept the donation for the lights.

No one showed up for public comment, however, for that meeting.

"We didn't know about it, no one knew about it," Parisa said.

Neighbors say they now want to see the lights taken down.

12 News did ask the district about whether there were any plans to alter the lights to make them less bright or take them down, as well as what the plans were regarding renting out the field.

“Scottsdale Unified School District and Chaparral High School want to be good neighbors.  The main goal of installing the new lighting on the varsity baseball and softball fields is to provide our student athletes with a safer environment and allows competition to take place out of the heat of the day.  We will continue to seek ways to allay our neighbors’ concerns as best we can.”