The accusations date back to August 2016 against the HIV-positive worker, according to court documents. 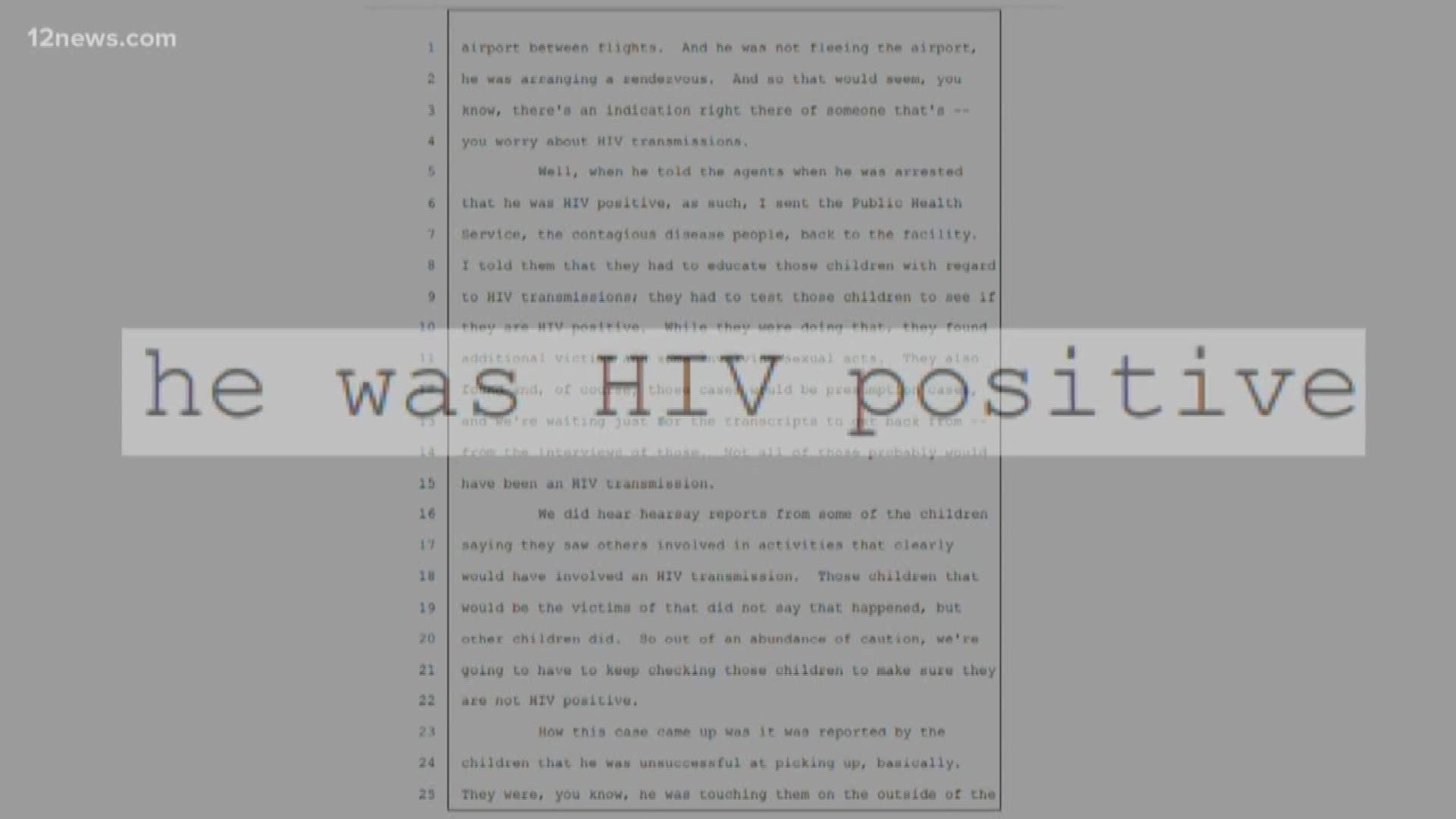 MESA, Ariz. – An employee at an East Valley facility which housed migrant children was charged with sexual crimes against eight boys.

Court documents revealed Levian D. Pacheco, who is HIV-positive, forced children to perform sexual acts on him and put them at risk of infection.

In one transcript, a federal prosecutor is quoted saying, “I sent the Public Health Service, the contagious disease people, back to the facility. I told them that they had to educate those children with regard to HIV transmissions; they had to test those children to see if they are HIV positive.”

The accusations date back to August 2016. The most horrific include two minors, referred to as John Doe 7 and John Doe 8 in the documents.

Court documents revealed, on separate occasions, each of those boys performed oral sex on Pacheco.

According to the latest indictment from June 26, 2018, Pacheco’s sexual act with John Doe 8, “involved contact between the victim’s penis and the defendant’s anus, upon penetration however slight.”

"Any employee accused of abuse is immediately suspended and law enforcement called. This is what we did in this case. In addition, we reported it to ORR and the appropriate state agency. We report these cases to law enforcement and state agencies when they happen. We surface them immediately to ORR, HHS OIG states and law enforcement. We educate every child in our care upon arrival to the facility of their right to be free from abuse or neglect in this program and this country. This message is repeated to the children throughout the duration of their stay at our shelters. Additionally, we fully comply with all background and fingerprint checks of the staff we employ, and we go above and beyond to train every employee on issues such as their legal obligation as mandated reporters of abuse or neglect, appropriate boundaries, situational awareness, bystander training and many others. Further, in each shelter the children have access to phones at all times. These phones are preprogrammed to call 911, Child Protective Services and ORR so that they can report an immediate situation in which they feel uncomfortable or in danger. Southwest Key also has Department of Internal Review, and this team evaluates each and every allegation with the shelters and conducts independent investigations as necessary. These are just a few of the methods we employ to prevent abuse and neglect in our shelters. We fully cooperate with any federal prosecution. HHS, ORR and SWK takes every incident seriously and there is a never ending process to improve care and standards."

Pacheco pleaded not guilty and was due back in court on Aug. 16.

On July 31, 2017, another Southwest Key employee who worked at a central Phoenix facility, Fernando Magaz Negrete, was arrested for sexual crimes against migrant children at that location.