Mesa police investigated a Facebook post showing an elderly woman with injuries sustained during an encounter with officers. 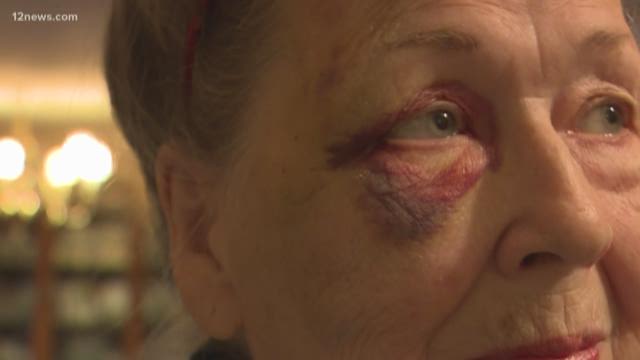 MESA, Ariz. - Mesa police responded, via their official Facebook page, to a Facebook post showing an 84-year-old woman with injuries sustained during an encounter with officers.

The Facebook post, made by the woman's granddaughter, alleges that police forced the woman out of the home and into the street, "holding her arms tight enough to leave bruises and bleed."

According to the post, officers slammed her head down when she was unable to hold still. The 84-year-old survived her fourth stroke in December.

In an interview with 12 News, the woman – who asked to be identified as Virginia – said she had been standing with an officer talking on the passenger side of his vehicle, when he quickly grabbed her arm, peeling back skin. She reacted by attempting to remove his fingertips from her wrist.

Virginia says the next thing she remembers is waking up on the ground.

Police confirmed the Facebook post was related to an emergency call on Wednesday, where officers received reports of a suicidal person with a gun.

Officers said they were told the person was a man in a vehicle in front of a home.

Police said upon arrival, officers said they saw a man matching the description provided exiting the vehicle and going toward the home, where they lost sight of him.

According to police, officers made announcements toward the residence when an elderly woman came to the door and stepped out.

Virginia complied with the officers' commands to walk toward them, police said. Once she was near, they explain, she appeared to show confusion and attempted to return into the home.

Police said, "in order to keep her out of harm's way, a use of force incident occurred with the female, who was injured."

They did not specify what exactly the use of force was. Ashlee Hahn, Virginia’s granddaughter, wants the police department to hold the officer accountable.

“If it were their grandmother, how would they keep her out of harm’s way?” Hahn asks.

Police said the man was contacted and the scene was secured. He was transported for evaluation.

A BB gun was found inside the home. Virginia explains it had been unloaded for years, resting on a high dresser in her room, and had belonged to her late husband who died two years ago.

Mesa police have directed all media requests regarding the incident to the statement on their Facebook page.