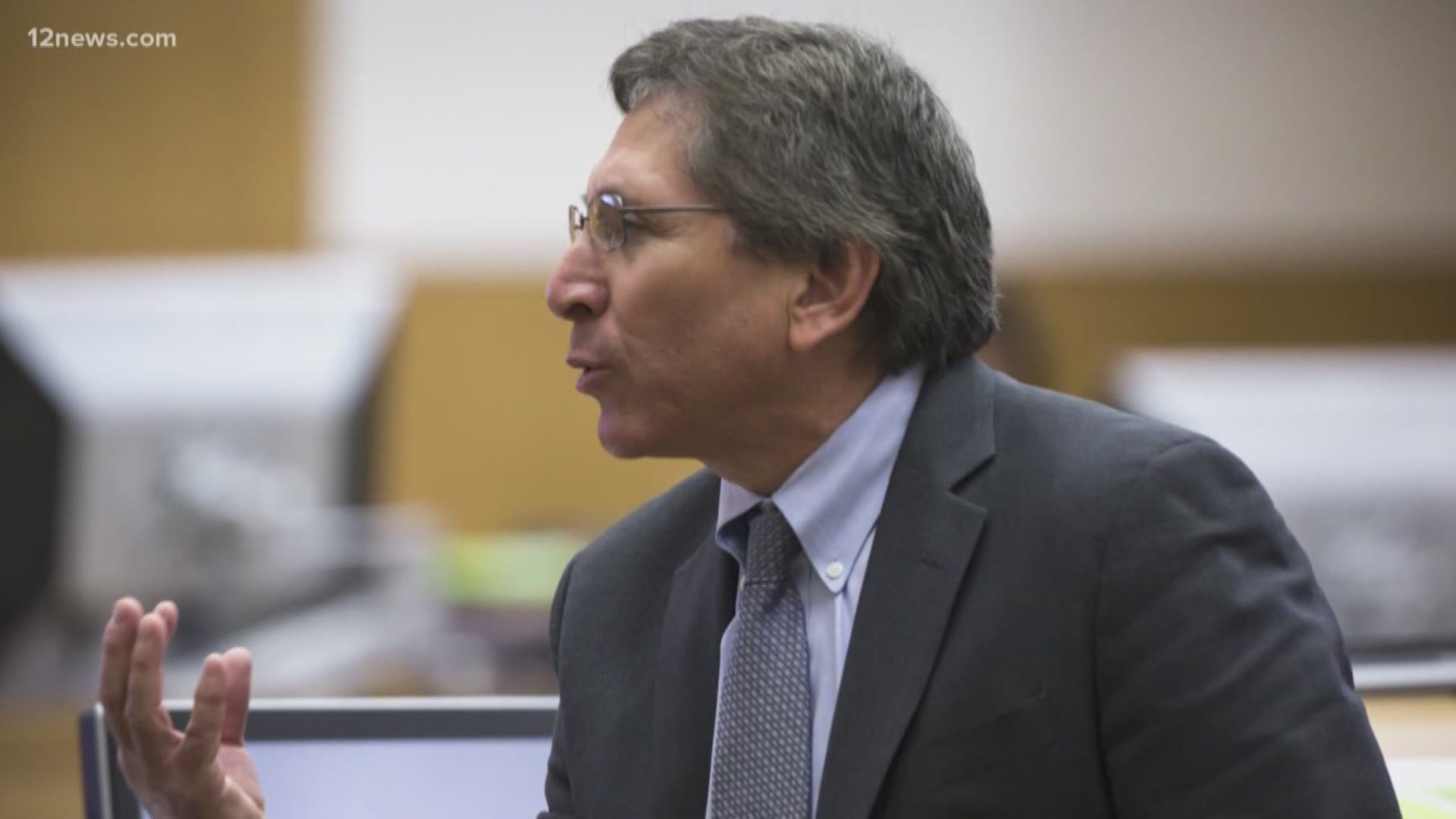 PHOENIX — Prosecutor Juan Martinez lied repeatedly to State Bar investigators about unethical conduct during the Jodi Arias trial, including having a sexual relationship with a trial blogger, giving the blogger secret information about a juror, and talking to a dismissed juror about jury deliberations, according to a State Bar complaint released Tuesday.

The complaint covers Martinez's behavior during the Arias murder trial, a sensational case that transformed Martinez, a deputy prosecutor in the Maricopa County Attorney's Office, into an international celebrity.

Arias was charged with the gruesome murder of her ex-boyfriend and is currently serving a life sentence. She was spared the death penalty by one holdout juror, identified only as Juror 17.

PREVIOUSLY: Jodi Arias prosecutor accused of 'inappropriate relationships' that may have affected trial

The complaint also describes Martinez's alleged behavior at the county attorney's office, where several female employees compiled a "JM shit list" of his sexually predatory conduct. Female employees said they would avoid Martinez in the office by hiding in a bathroom or ducking into a cubicle.

The complaint marks the first time details of the county investigation have been made public. County Attorney Bill Montgomery had the more than 800 documents that he sent to the State Bar placed under seal.

Martinez could face a range of disciplinary actions if the complaint is upheld, up to and including losing his law license.

Here are the key allegations:

Getting into a sexual relationship

"The testimony was false, and respondent knew it was false," the complaint says, one of several times Martinez is called out for lying with that same declaration.

"The relationship continued through the second penalty phase of the Arias case and for several years thereafter," the complaint says.

Juror 17 was the holdout juror who stood in the way of Martinez persuading the Arias jury to put her to death.

After the judge rejected Martinez's motion to dismiss Juror 17, Martinez "provided Juror 17's name to Ms. Wood who then looked up Juror 17's Facebook page. Respondent told Ms. Wood that if anyone found out that he had provided her with this information, he would be disbarred," according to the complaint.

But Martinez denied to investigators that he had given Wood any information about Juror 17.

"The testimony was false, and respondent knew it was false," the complaint says.

Juror 17 became the target of hate mail and death threats after her identity was made public on social media.

But the ethics complaint says investigators were not able to prove Wood was the person who leaked it. Investigators did say she shared the information with one other person covering the trial.

When Juror 3 was dismissed, the ethics complaint says, the Arias trial judge asked her not to disclose anything about the proceedings to anyone. Yet she contacted Martinez, after getting his cellphone number from Wood.

She was interested in a sexual relationship - "sexting unsolicited nude photographs of herself" - and offered her thoughts on jurors' appearances, a "read" on how jurors might be leaning and invitations to lunch or dinner.

Martinez said, "I could (get into trouble), just by the way it looks."

But he went ahead and asked Juror 3 questions to determine how jurors "might view evidence or aspects of the case."

The complaint says Martinez's testimony about their communication "was false, and he knew it was false."

The complaint alleges that female staffers in the Maricopa County Attorney's Office compiled a "JM shit list" of his sexually predatory conduct.

This part of the complaint is based on an internal investigation by MCAO that included interviews with 30 employees.

They alleged Martinez made "inappropriate comments of a sexual nature" - he told one clerk he could "guess the color of (her) underwear" and another "he wanted to climb her like a statue."

Female employees also said Martinez engaged in unwanted touching and made unwelcome invitations to lunch or a date.

The investigation found law clerks would hide from Martinez in bathrooms or duck into cubicles.

Montgomery’s office released a statement Tuesday saying it was aware of the official complaint filed by the State Bar:

"We can confirm Juan Martinez is currently employed by the Maricopa County Attorney’s Office. We are now aware of an official complaint filed by the Arizona State Bar following an investigation we cooperated with and provided the State Bar with requested materials. As with similar matters, we will respect the Bar disciplinary process and not comment further."

Karen Clark, Arias' attorney and an expert on legal ethics, followed up by filing a 400-page brief with more information. That led to the current Bar complaint.

Martinez now has 20 business days to file a response to the complaint. After that, a formal hearing would be scheduled by the Arizona Supreme Court before a three-person disciplinary panel.

The court would ultimately decide on any discipline for Martinez.

Martinez's ethics attorney, Donald Wilson, said via email Tuesday that Martinez "looks forward to the opportunity to defend himself and be exonerated from this Bar charge."

"This will not deter him from continuing to do the fine work he has done for the citizens of Maricopa County," he said.