Eight handwritten notes provide a glimpse into the mind of the 15-year-old Independence High School shooting suspect accused of gunning down 15-year-old May Kieu before turning the gun on herself. 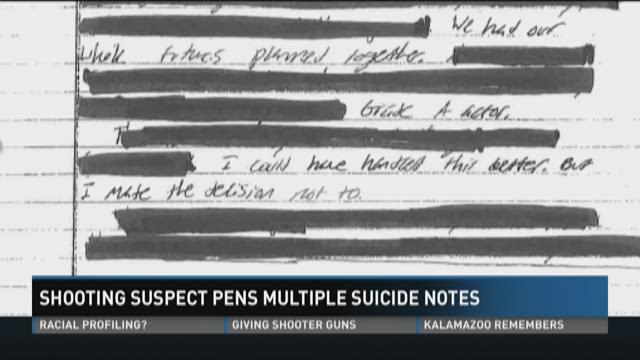 GLENDALE, Ariz. - Eight handwritten notes provide a glimpse into the mind of the 15-year-old suspect accused of gunning down 15-year-old May Kieu before turning the gun on herself at Independence High School two weeks ago.

The family of Dorothy Dutiel has identified her as the shooter and, according to Glendale police, the two sophomore students were in a relationship.

MORE: IHS shooting was a murder-suicide

In the emotional notes, Dutiel asks friends and family to forgive her and forget her. Dutiel said she was happy at home, but also wrote she has struggled with depression.

"She felt that she was solely responsible for everything and felt really alone," said Nicole Roberts, associate professor of psychology at ASU. Roberts, who isn't involved with the investigation, read the notes and said it was clear that Dutiel felt hopeless and didn't know what to do.

A note addressed to first responders, that was discovered by police in the suspect's pocket, states the kind of weapon used in the shooting and identifies the student who provided the weapon.

“I would like to clarify that him and his family are in no way affiliated with my actions," the suspect writes.

Dutiel admits she lied to get the gun, claiming she needed it for self-defense.

"She may have in fact felt that she needed a weapon to protect herself," Robert said. "What's so tragic, is that she did turn it against herself and her loved one because she didn't know what else to do."

The note goes on to identify Kieu as the victim.

“The victim is my girlfriend, whom I grew up with,” she writes.

Dutiel said she accepts full responsibility for the shooting, noting that she believes she is of sound mind while writing, and states she does not condone her actions.

Portions of all the letters are redacted and some are dated the day of the shooting, Feb. 12. Other notes were addressed to Dutiel's parents, siblings and best friends.

In one note, Dorothy writes May told her she didn't love her anymore and writes, “I was not okay.”

The next portion of the note is censored, but Dutiel then writes:

"She hasn’t loved me like that for a long time. That she’s been iffy about us for years. This week has been the worst in my life.”

Another note addressed to her parents, Dutiel says she could've handled this better, but made the decision not to.

At the end of the note left at the scene, Dutiel included emergency contact information for police.

According to police documents, the notes were discovered at the scene and multiple locations inside Dutiel's home.