Moveon.org called for people across the country to protest the president and ask for his removal from office. 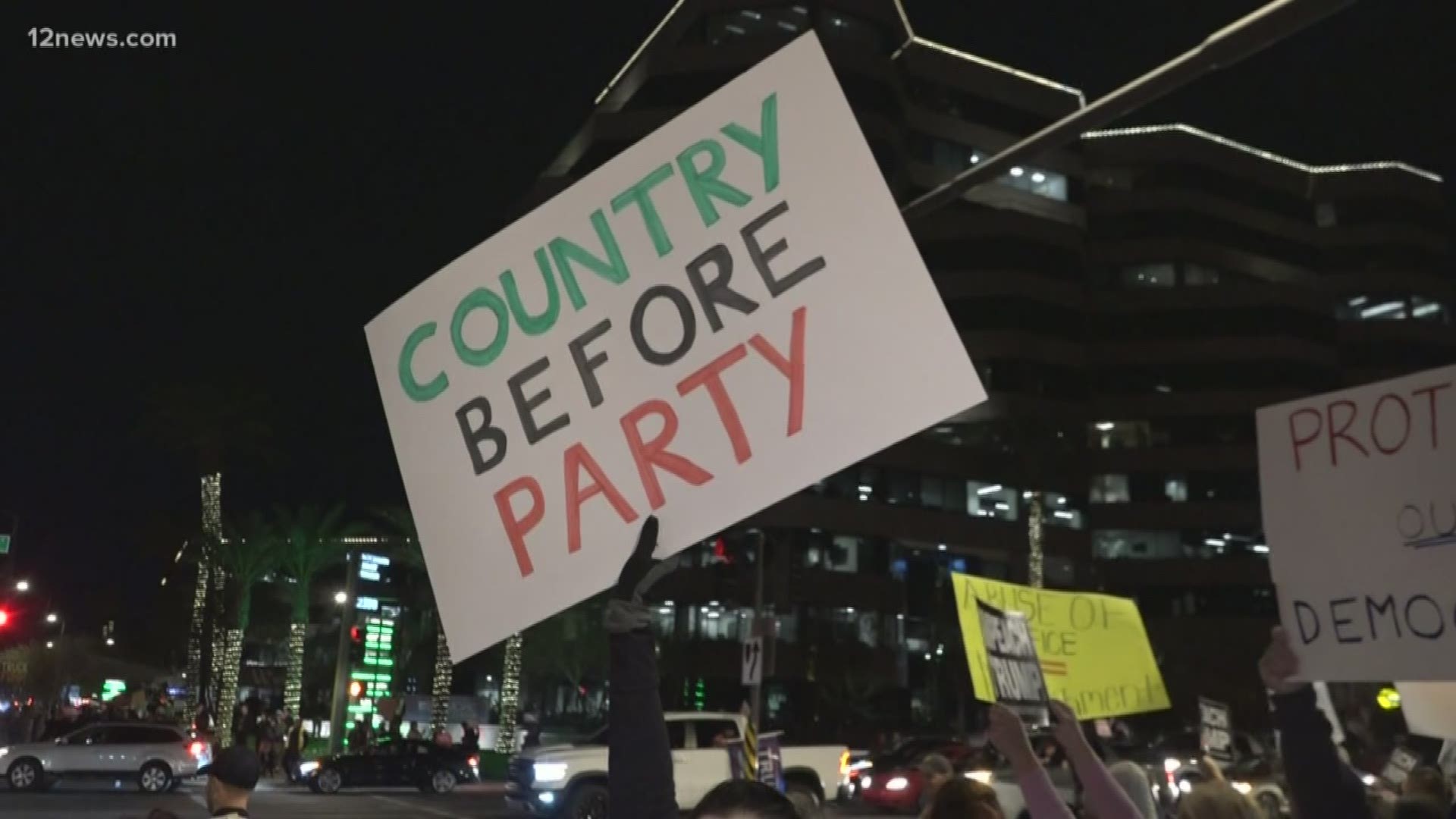 PHOENIX — Hundreds of protesters around the Valley hit the streets to call for the removal of President Donald Trump.

The progressive organization Moveon.org called for the rally around the country. Team 12’s Mike Gonzalez spent the evening at a protest Rally on the corner of 24th street and Camelback--- where emotions were running high on both sides.

The rally got started around 5 p.m. and quickly grew. We talked with people on both side of the issue.

John Hensel said he went to the rally "to save democracy."

Hensel said Tuesday night's protest was about the future of our country.

“He’s a criminal and shouldn’t have been in the office in the first place,” Hensel said of President Trump.

RELATED: Donald Trump hours from likely being an impeached president

Hensel was one of hundreds of mostly anti-Trump protesters throughout the Valley asking for the president’s removal.

But about 20 people attending were on the president’s side. They were being protected by Phoenix police because they were so outnumbered.

We met a young black woman in the crowd with pro-Trump T-shirt on. She said she thinks black Americans should support Republicans.

“Yes,” said Hope Coles. “Democrats have been using us as pawns in the game for years.”

Coles said she’s happy the black Americans are working more than ever and the president is the one finally in their corner.

“I've never been in the Democratic party, honey. I’ve always been a Republican.”

But Elliot Kemper, who graduated from Arizona State University's school of business earlier on Tuesday, said the economy isn’t as strong as people believe and the president needs to go.

“We need someone who’s accountable to the laws and he’s constantly violating them,” Kemper said.

Josh Barnett, who’s running for Congress in the 7th District, said most of the anti-Trump protesters don’t even know the facts of the impeachment case. “I’ve repeatedly asked why he should be impeached and not one person can answer me,” said Barnett.

As for John Hensel and Hope Coles – two people with different views our president – their opinions certainly aren’t going to change.

“I’ve never been on a Democratic plantation. I always work for mine,’ said Coles.

“They’ve all got to go in order for this to be returned to some semblance of democracy,’ said Hensel.

It’s a debate that may only be won at the ballot box.

RELATED: Republicans coin 'T'was the night before impeachment' ahead of Wednesday vote