'I truly hope to be reunited': Afghan man living in the Valley trying to get family out of Taliban-controlled nation

Turan’s family is stuck in Kabul, in hiding, while trying to find a way to get out of the country. 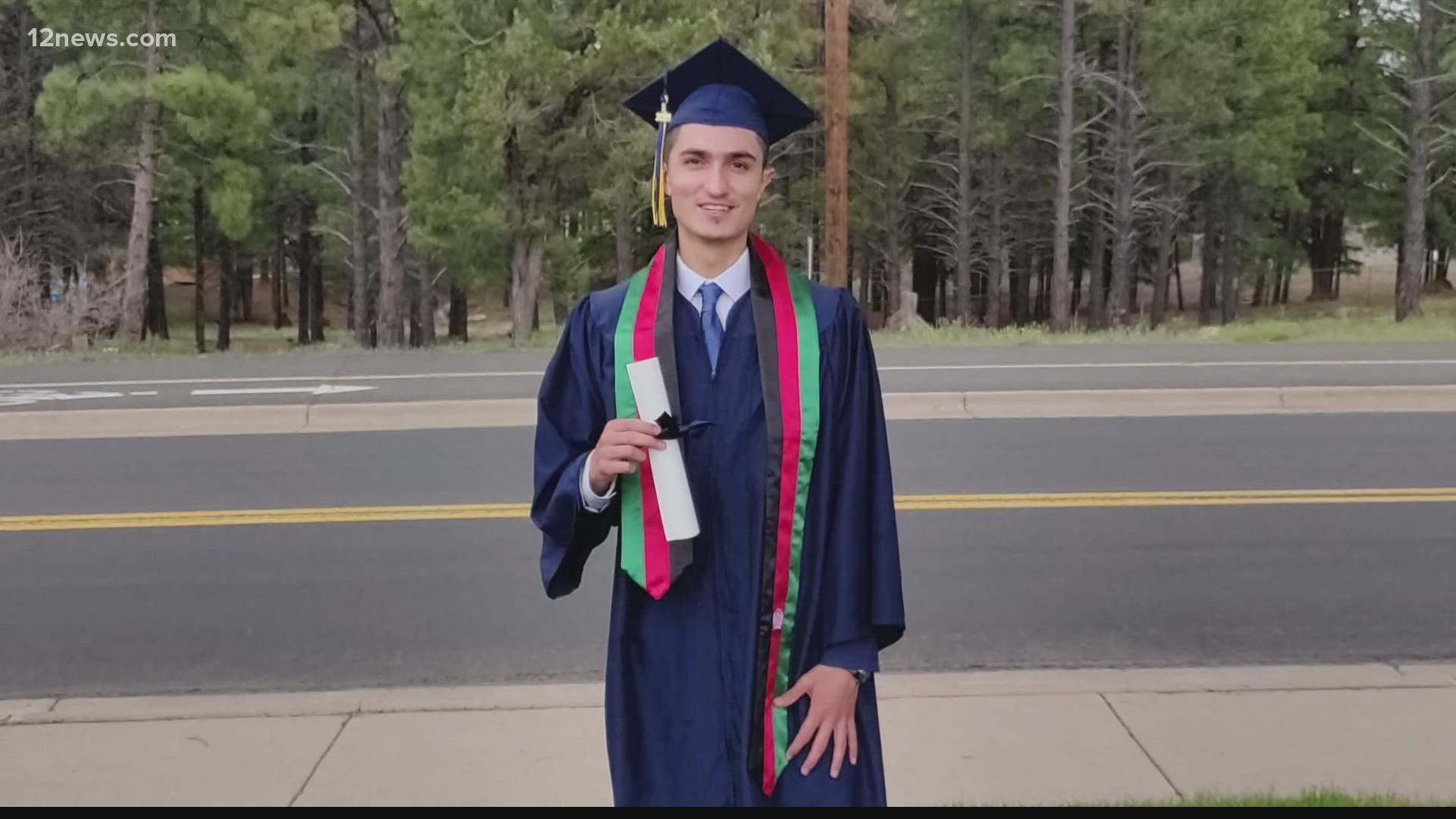 PHOENIX — An Afghan man living in the Valley is trying to find a way to get his family out of his home country.

Turan’s family is stuck in Kabul, in hiding, while working on a way to get out of the country.

His family is just one of many trying to flee the country after the Taliban took control of Afghanistan.

12 News is not sharing Turan’s last name for the safety of his family.

Turan came to Arizona six years ago to attend college at Northern Arizona University and has lived here since then.

In Turan’s Valley apartment, he showed a photo of himself decked out in a navy blue cap and gown, with an Afghan flag stole draped around his neck on the day of his graduation from NAU.

“I want them to have the same chances that I have here, you know?” Turan said.

Turan’s family is from the northern part of Afghanistan. He said his mom called him a little more than a week ago to tell him they had to flee. Turan’s father was able to get to Uzbekistan, while his mother, sister and brother left in the middle of the night for Kabul, in hopes of catching a commercial flight.

When they arrived, he said they tried to get to the U.S. Embassy to try to apply for a visa.

“But obviously, with everything happening so fast the U.S. Embassy closed. So our next best option was to try and go to any other embassy to go to any other third country, you know, but the problem is everything closed down so fast,” Turan said.

‘I just want my family to get to safety'

His mother, younger sister and younger brother are now all hiding in Kabul.

Turan shared a video with 12 News he said was taken by his mom on Monday. It shows the scene outside the Kabul Airport. It’s dark, and dozens upon dozens of people surround his family.

Turan said they made the trek in the middle of the night to try and avoid the Taliban.

“It’s truly a barbaric regime that has taken over,” Turan said.

Turan said his mom is at increased risk because she worked as a woman’s rights activist for some time in rural areas of Afghanistan.

“She was always an increased risk. According to the Taliban, she is pushing Western ideologies on women. All my mom was doing was trying to get Afghan women to be more educated so they could participate more in the Democratic process,” Turan said.

Right now, he said his family is stuck in Kabul.

“They get their food and water delivered by the neighbors and the locals that know them so it’s been very difficult, unfortunately,” Turan said.

Turan said he and his friends have been doing what they can from more than 7,000 miles away to try and get his family out of the country safely.

“The Afghan people they need us. There is a humanitarian crisis happening in Afghanistan and I do feel like the world is kind of turning a blind eye they’re not doing everything they can,” Turan said.

Turan said the way things have unfolded over this past week has left people in Afghanistan feeling abandoned and left behind to the mercy of the Taliban.

Even though the situation is uncertain and changing constantly, he has hope.

“I truly hope to be reunited with them,” Turan said.