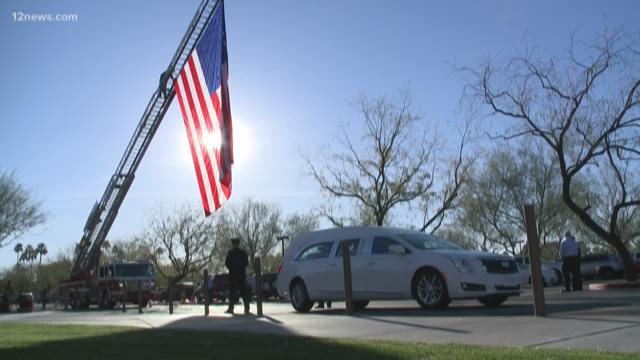 SCOTTSDALE, Ariz. - Hundreds gathered to honor the life of 34-year-old Kyle Brayer, a captain with the Tempe Fire Department who was killed in an off-duty altercation in Scottsdale.

The man's father and sister spoke during the hour-long funeral held at Scottsdale Bible Church and painted a picture of a very driven young man who always had high aspirations to serve others, proclaiming at 10 years old that he wanted to join the Marines.

Brayer was shot to death early Sunday morning after an altercation that happened in the middle of Old Town Scottsdale.

According to police, Brayer and his friends were riding in a golf cart when a car driven by 21-year-old Hezron Parks began aggressively following the cart and at times getting so close it nearly hit the cart.

The police report states Brayer attempted to approach the driver side window of the car and Parks told police he felt threatened and pulled out his gun from the center console.

Parks claims he did not think the gun was loaded and wound up firing a shot that struck Brayer in the head.

The Maricopa County Attorney's Office has filed a second-degree murder charge against Parks, who fled the scene after the shooting, only to turn himself in several hours later.

Brayer leaves behind his mother, father and younger sister.

According to family members, the man's ashes will be scattered across all seven continents in honor of his adventurous spirit and love for travel.