The fire burning north of Cave Creek Regional Park remained at 1,492 acres. Containment on the fire increased to 80% on Wednesday. 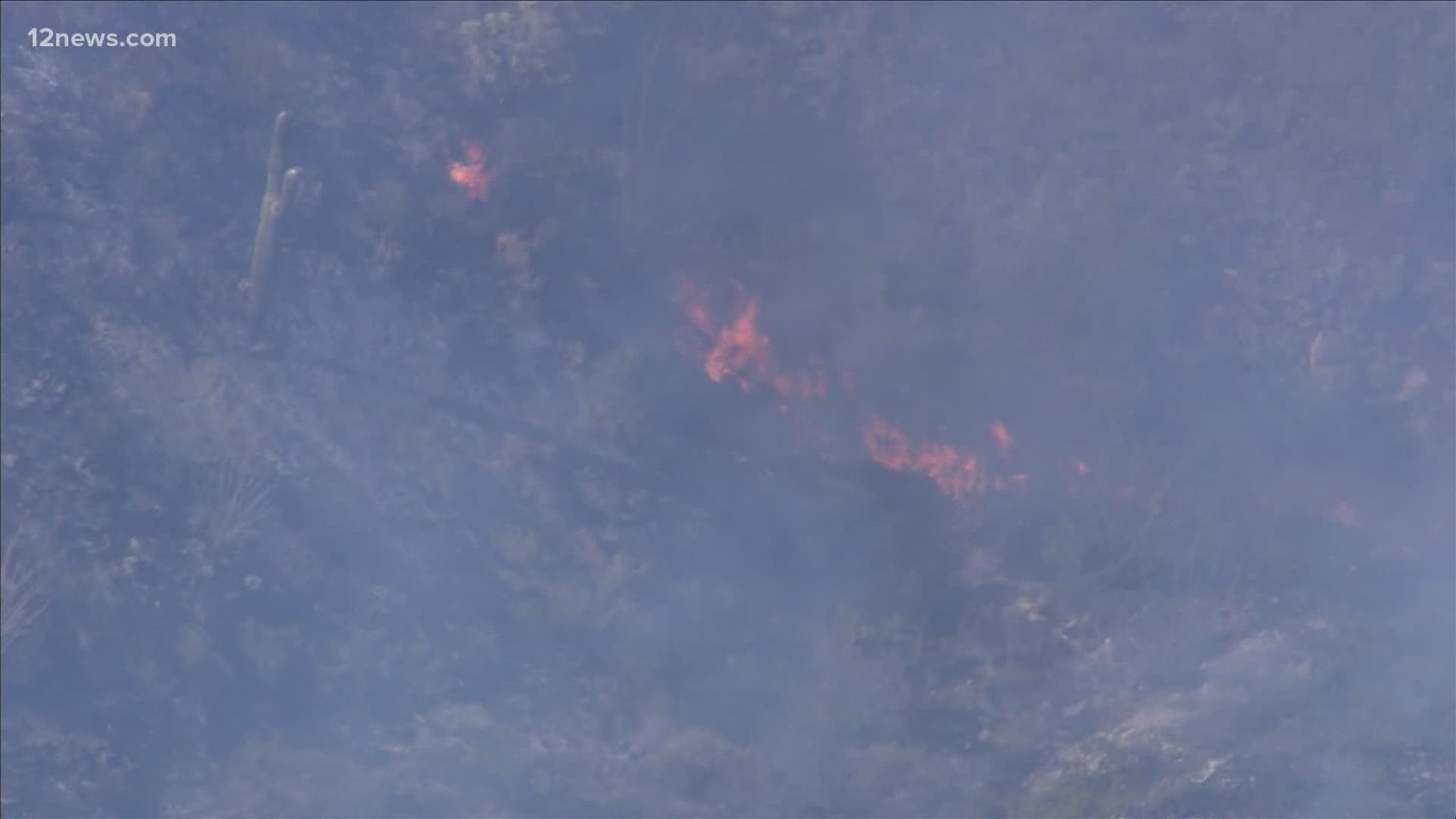 CAVE CREEK, Ariz. — Editor's note: The above video is from a Wednesday morning newscast.

Containment on a brush fire burning 1,492 acres in north Phoenix near Cave Creek has increased to 80% as of Wednesday, according to the Arizona Department of Forestry.

The East Desert Fire, which was burning near 24th Street and Desert Hills Drive, has stayed steady at just under 1,500 acres since it first sparked on Sunday.

The fire quickly spread to hundreds of acres Sunday afternoon, fueled by wind through dry grass and brush.

About 132 homes were evacuated as of Monday morning, but none have been lost.

Evacuation orders were lifted at 6 p.m. Tuesday. All residents were allowed back in their homes. 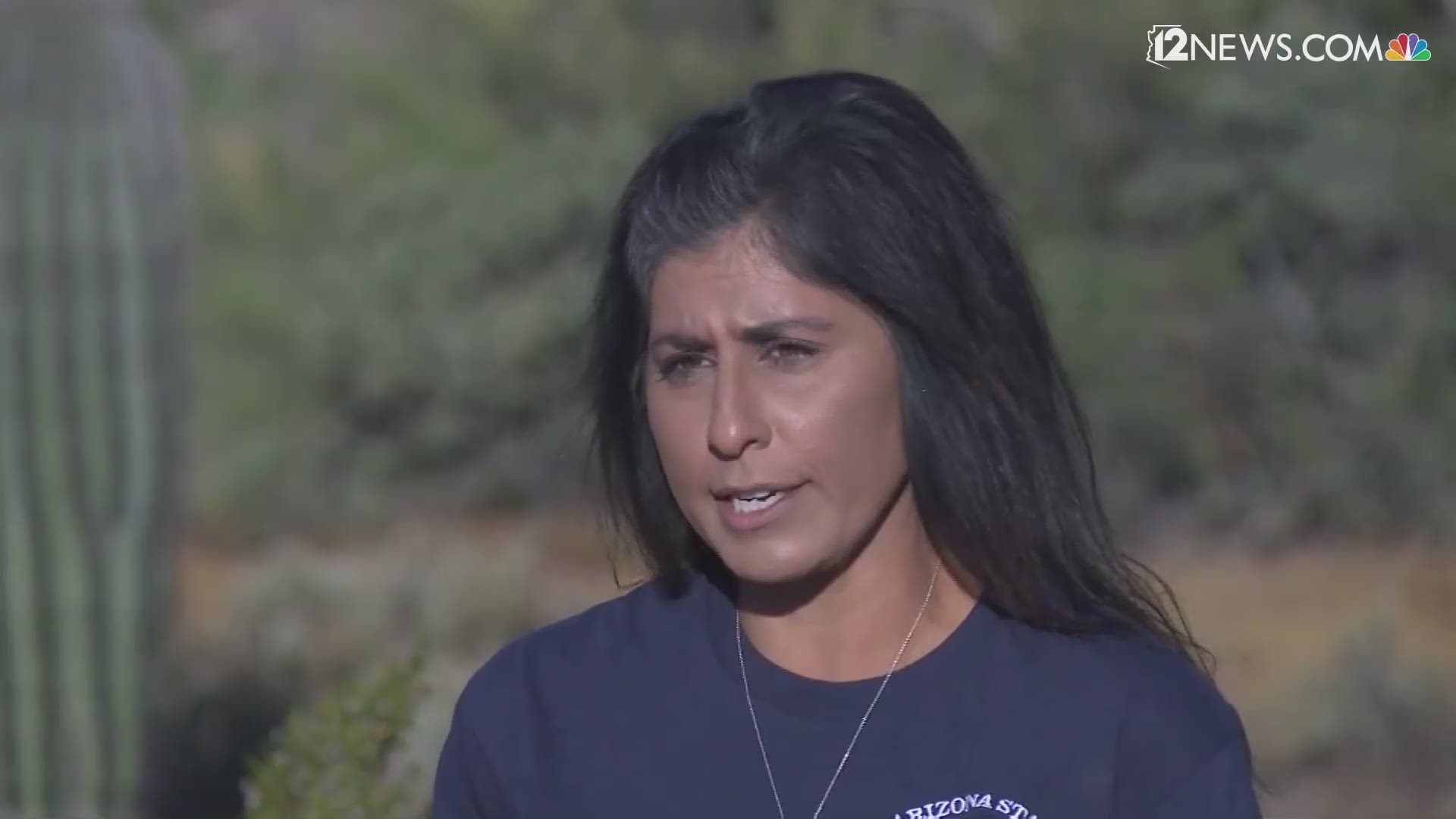 The Red Cross of Arizona established an Emergency Evacuation Center at the main gym at the Cactus Shadows High School.

The Federal Emergency Management Agency authorized the use of federal funds to assist the state in fighting the fire Monday afternoon. The agency will provide up to 75% of eligible firefighting costs through a Fire Management Assistance Grant (FMAG).

The FMAG was authorized because the wildfire has the capability of causing enough destruction to be labeled a major disaster, FEMA Region IX regional administrator Robert J. Fenton Jr. said.

Containment around the blaze rose up and down as crews worked to put out the fire, but the firefighters managed to hold at it at 50% containment as of Monday night.

No one has been injured in the fire, firefighters said Sunday, but many residents were forced to evacuate.

“I have a bunch of stuff up there I kind of left in a hurry last night,” said Peggy Hughes, who had to be evacuated.

“It’s just me and the dog. We threw a couple things in the car and took off. I mean it is just things, but it’s a lot of things.”

“It was such a horrible feeling that everything you own your animals could be gone in a heartbeat.” Gilda Ferguson, a resident in the evacuation zone, said.

Ferguson said she watched the fire get a half mile from her house before being turned back by firefighters at a dirt road.

As the flames approached Sunday night, she sent out a social post for help, not for her, but for her horses.

The two were two of many in the Cave Creek community who hitched up their trailers and rushed into danger to get animals at risk to safety.

“There must have been 100’s of trucks and trailers, hauling stock...,“ Hill said.

On Tuesday, Hill and Kunkel loaded up the horses once again, this time to bring them back home.

“You got to give them credit to the fire department..” Hill said.

Winds and dry brush caused the fire to swell quickly to over 1,400 acres by Monday morning.

Firefighters were then able to get control of the fire, stalling its growth and containing the fire.

“If the firefighters hadn’t been there those houses would have been gone. “ Ferguson said.

And after a stressful and nerve-wracking 48 hours, Gilda and her horses are reunited at home once again.

The East Desert Fire was believed to be human-caused, the Arizona Department of Forestry and Fire Management said.

The exact cause of the fire is still unknown.

WATCH LIVE: Sky 12 is on scene of the East Desert Fire, which has burned more than 1,500 acres in north Phoenix and forced the evacuation of at least 40 homes as of Monday morning. MORE: https://bit.ly/2X5AdKp