'He wowed us right away': ASU artistic director on young Valley actor

As he continues to dream big, he doesn’t forget where he’s coming from and wants to give back to his community. 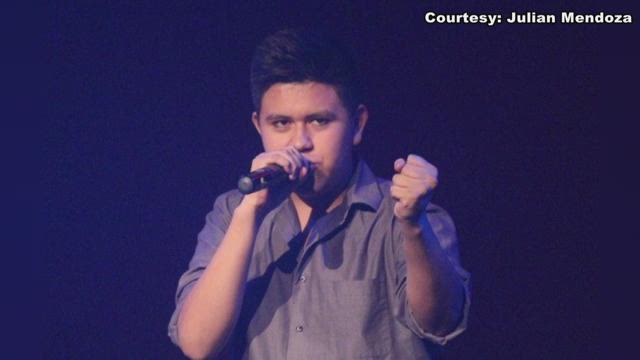 TEMPE, Ariz. - Huge accomplishments can get done when you dream big and follow that dream. That’s the case of a young Valley man who is on his way to accomplishing his goals of making it to New York to act and sing in a Broadway show.

“I think I was around 3 years old. I watched a lot of Barney and that really inspired me to have a big imagination. And then just music, my parents love playing music around the house all the time, so that helped out a lot," said Julian Mendoza.

Years later, his parents, Francisco and Nony, moved to the other side of town to help him pursue his acting and singing goals.

“The school I was going to at the moment didn’t have the resources I needed. So, we moved to Tempe and I went to Desert Vista High School and they had an excellent choir group, which I fell in love with,” said Mendoza.

He took a year off after high school to join some local theater groups. Among them was Theater Works, a group he went on a tour with, for the musical Les Misérables.

“After graduating I did a full year of shows. And I know I really want to pursue that and I need more training, so I audition for the ASU musical theater program."

During the auditions at Arizona State University, Julian was on tour, so he decided to send them a recording of his performance.

ASU artistic director, Brian DeMaris, said the School of Music could tell he was talented just from the audition video he sent.

“He recorded two songs that are by characters that are sore of notoriously difficult and he wowed us right away just by watching his video on the computer screen. And ended up coming here, and he’s been really terrific,” said Brian DeMaris, artistic director for the School of Music at ASU.

And during summer of 2017 he received the National youth Arts award as well as an Award of Excellence from AriZoni both for outstanding leading actor in a musical, for his role of Jean Valjean in Les Misérables.

“I never thought ‘Oh, I’m Hispanic, I don’t know if I can play this role or not.’ I don’t think it matters what color you are if you can tell a beautiful story and you can do it successfully,” said Mendoza.

He continues to dream big and doesn’t forget where he’s coming from.

“I want to move to New York and pursue theater there, but when I’m older I also want to open up a community theater here in Phoenix for underprivileged kids,” he mentioned.

In the meantime, Mendoza is rehearsing for the musical ‘A New Brain’ to be presented by ASU Lyric Opera Theatre mid-November. For information on the musical or to purchase tickets visit the ASU events page.