As Memorial Day approaches, one Gilbert family is in a battle with their Home Owner’s Association because of their attempt to honor their son. 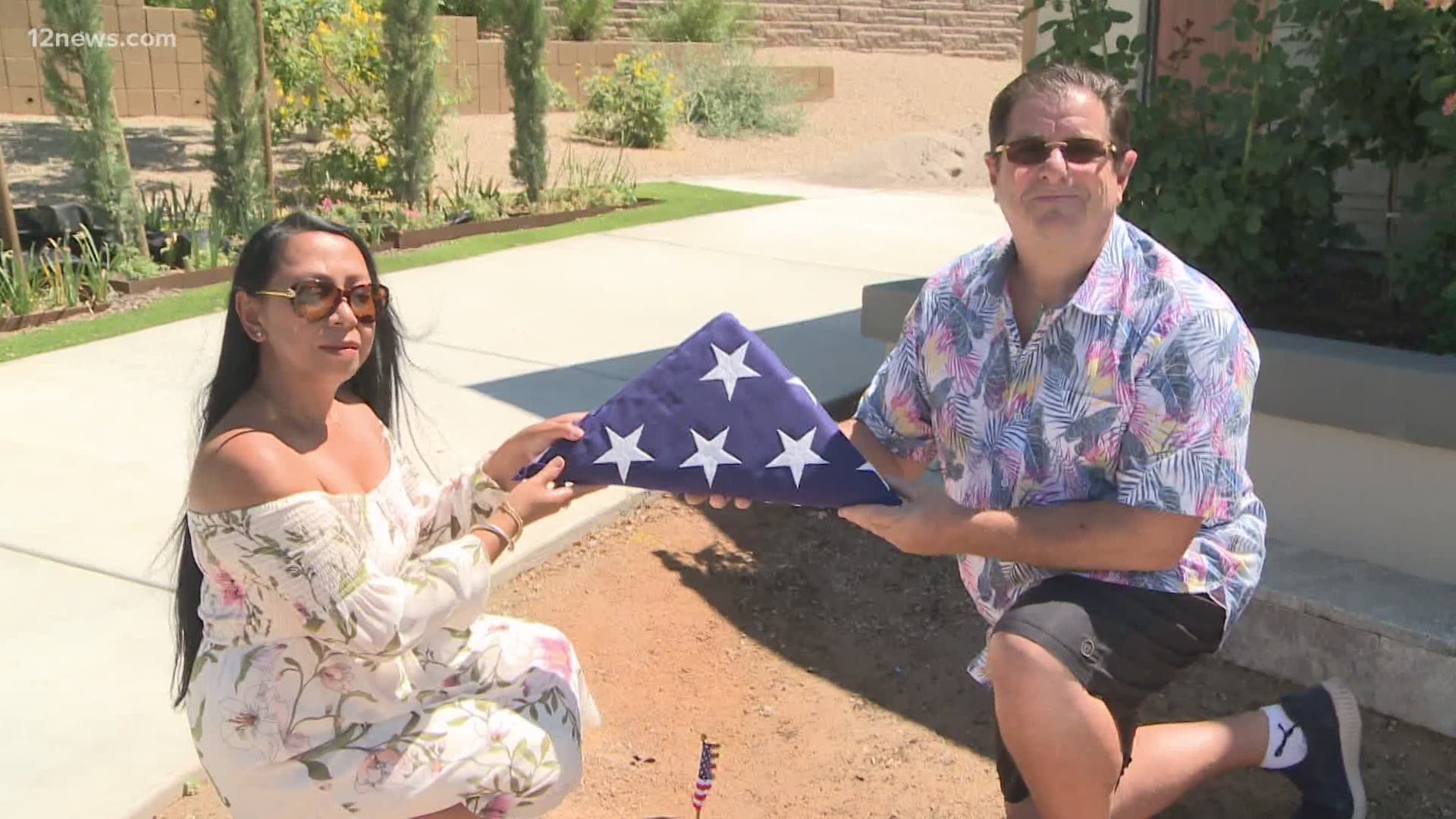 GILBERT, Ariz. — As Memorial Day approaches, one Gilbert family is in a battle with their Home Owner’s Association because of their attempt to honor their fallen son.

Craig and Alma Smith lost their son, Donald Smith, in a military exercise in 2006. Donald Smith received full military honors and was laid to rest at Arlington National Cemetery.

The flag that draped Donald’s coffin, the Burial Flag, holds a special meaning to the Smith family - as it does all Gold Star families. The Smith’s have a special way that they want to display that burial flag.

“Our intent was to build a memorial to him in our front yard with a plaque dedicating the flagpole to his life.” Craig Smith, Donald’s father said. “On the first day, we would fly his burial flag. On the second day, we would bring it down, have it refolded by the Honor Guard, and replaced by a regular flag.”

Credit: 12 News
Craig and Alma Smith hold the flag that draped their son’s casket near the spot where they are attempting to build a memorial flagpole in his honor, Wednesday, May 20, 2020.

But according to the Seville Homeowners Association, that will not happen. The HOA cites an Association rule that Flagpoles must be constructed 15 feet or more away from the property line. That's impossible given the layout of their property.

Most homes in the Seville Association have small front yards, which would exclude them from the 15-foot rule.

Which is true. According to Arizona Revised Statute 33-1808:

“A. Notwithstanding any provision in the community documents, an association shall not prohibit the outdoor front yard or backyard display of any of the following:

1. The American flag or an official or replica of a flag of the United States army, navy, air force, marine corps or coast guard by an association member on that member's property if the American flag or military flag is displayed in a manner consistent with the federal flag code (P.L. 94-344; 90 Stat. 810; 4 United States Code sections 4 through 10).

The statute goes on to lay out what an association can require of members wanting to display a flag:

“B. The association shall adopt reasonable rules and regulations regarding the placement and manner of display of the American flag, the military flag, the POW/MIA flag, the Arizona state flag or an Arizona Indian Nation flag. The association rules may regulate the location and size of flagpoles, may limit the member to displaying no more than two flags at once and may limit the height of the flagpole to no more than the height of the rooftop of the member's home but shall not prohibit the installation of a flagpole in the front yard or backyard of the member's property.”

Smith questions if the 15-foot rule is a “reasonable rule and regulation,” given the size of most front yards in the Seville Association.

In a statement given to 12 News, Seville Homeowners Association addressed the issue of the Smith flagpole:

In an email between the Town of Gilbert and Craig Smith, Jason Stanley writes:

“Per our conversation, I will outline the Town of Gilbert’s code on your flagpole installation.

- Flag pole’s under 30’ in height do not require a permit through the Town of Gilbert per section R105.2 of Gilbert’s Amended International Residential Code. Refer to note 11:

Credit: 12 News
Craig Smith sits with this son’s burial flag near the spot where he plans a memorial flagpole in his son’s honor, Wednesday, May 20, 2020.

As this Memorial Day approaches, Craig Smith is looking at another attempt to persuade the Homeowners Association to allow his son’s memorial to stand.

The issue causes Craig and Alma Smith to relive the Arlington service and the pain of the loss of his son.