Friend says woman targeted by George Lopez was not a heckler

In the video, Lopez is heard saying "There are only two rules in the Latino family: Don't marry somebody black and don't park in front of our house.” 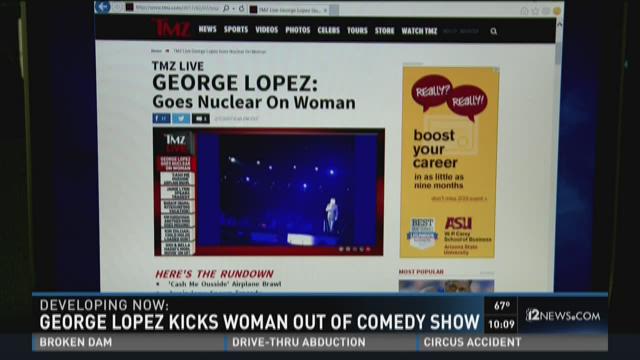 PHOENIX - New video released by TMZ is putting comedian George Lopez and an alleged heckler at the center of a debate over one of his acts that some say went from comedic to cruel when he cursed at a woman before kicking her out his show Saturday night in Phoenix.

In the video, Lopez is heard saying "There are only two rules in the Latino family: Don't marry somebody black and don't park in front of our house.”

The video then shows Lopez lashing out at the woman after she stands up and reacts to the racially charged joke.

While Lopez and the crowd seemed to treat her as a heckler, the woman's friend who was with her at the show says that’s definitely not how she meant for her reaction to come off.

“At first she wanted to be part of the joke, because he's her favorite (comedian) but then it just went 180," Juan Quezada said. "Completely the opposite.”

Lopez is heard on the video using profanity to tell the woman to sit down, and later to leave.

Quezada, one of the woman's friends who was with her at the show says they know what Lopez is known for and were more than ready to laugh at his sometimes harsh racial humor.

“It was like the time of my life at first and then all of a sudden he says a racist joke about blacks marrying Hispanics, which we thought was totally funny,” Quezada said.

Quezada says his friend, trying to play along, stood up and made a gesture at Lopez.

“When she stood up she put two hands in the air and she was like, ‘I'm Mexican and black,’" Quezada says his friend said while laughing. “She was joking with the whole situation.”

Lopez wasn’t laughing and as shown in the clip yelled at the woman even after she sat back down eventually telling her to "get the f*** out."

Overwhelmed by media attention, Quezada's friend didn't want to go on camera Wednesday night but in the morning she did call in to the Tino Cochino Radio Show on Power 98.3 & 101.9.

"You can't escape this story -- TMZ is talking about it,” Tino the radio show host is heard saying on a clip the station sent us.

The woman told the show she was not offended by the joke and that she was joking when she stood up, but Lopez was the one who got offended.

Many people are now slamming Lopez on social media for how he treated the woman, with some of them calling him a racist.

Quezada's friend is also receiving a lot of backlash for interrupting the show.

“I don't think anybody has the right to jump up and do whatever,” he said.

Still, he feels Lopez could have been less cruel.

“We're your number one fans,” Quezada said, “Why did we just get humiliated in front of thousands of people?”

Despite the incident, Quezada said he and his friend are still fans of Lopez and would definitely go to another show.