Allegations from several victims against former trooper Tremaine Jackson date back to October 2018 and DPS believes there could be more. 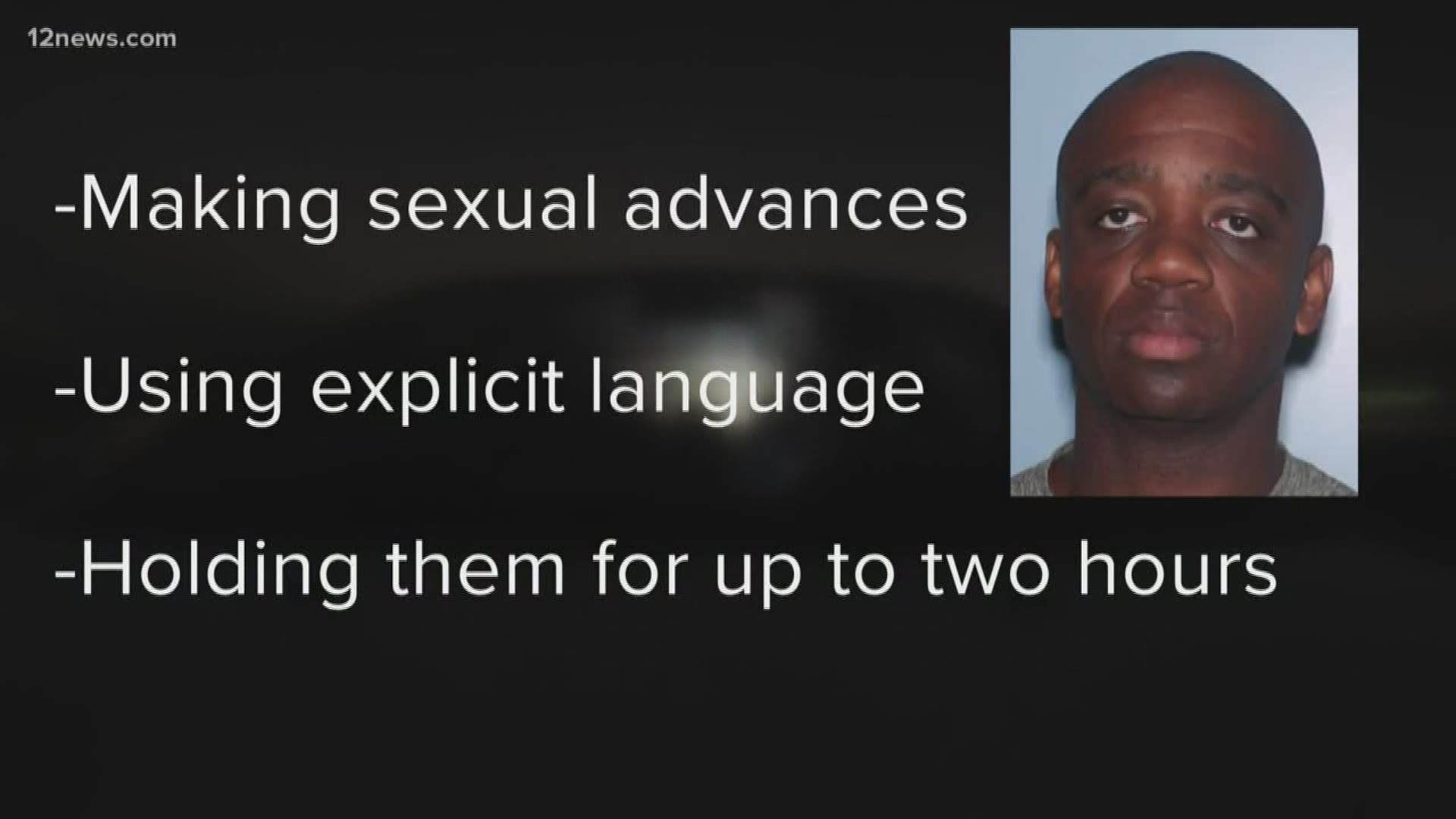 A former Arizona Department of Public Safety trooper who was arrested and booked on numerous criminal counts including sexual abuse pulled over more women than men in a timespan dating back to January 1, 2018, according to the department.

A more-than 20-page probable cause statement obtained by 12 News details the alleged crimes of 43-year-old Tremaine Jackson, a 13-year veteran of the department.

According to the statement, DPS began its investigation after a victim, named Victim #1 in the documents, accused Jackson of sexual assault on June 11, 2019.

The documents said a “pattern of offenses and history of behavior” existed with Jackson before and after the alleged assault of Victim #1, which occurred on December 15, 2018 around midnight, according to the documents.

According to the paperwork, traffic stop data showed Jackson pulled over more women than men from January 1, 2018 to June 11, 2019. The documents referred to that as a “statistical anomaly” as the average trooper at the Metro Patrol Bureau, Metro Motors District and Jackson’s squad stopped “nearly two men for every one woman."

The investigation into the allegations against Jackson, according to court documents, revealed Jackson reset his contact timer regularly with no location and failed to place himself at traffic stops via the system DPS uses to track trooper activity.

The documents allege Jackson gave DPS warnings with “no legal violation of law to conduct the traffic stop.” He also generated the warnings with false information including times, locations and violations, according to documents.

The documents showed Jackson “illegally detained women he found attractive” and used his position as a DPS trooper to “further his predatory behavior.”

The documents detail the claims from eight separate victims and one classified as a witness against Jackson. The victims were given numbers in the documents and not named. The allegations date back to October 2018 and DPS believes there could be more victims.

A judge Wednesday set a secured appearance bond at $150,000 during Jackson's initial appearance in court.

Court documents show Victim 1 was stopped by Jackson on southbound I-17 near the I-10 interchange on Dec. 15, 2018, just before midnight.

Victim 1, according to court documents, claimed she was held for 45 to 60 minutes and not allowed to leave. During that time, Victim 1 said Jackson told her she was beautiful and said she had "nice lips."

Court documents alleged Jackson made Victim 1 "plea for release." Victim 1 claimed Jackson told her she "caused him to have an erection." He told her to touch it three times, according to court documents. Victim 1 was released after touching him, documents show.

Victim 2 was pulled over on I-17 near Thomas Road on December 22, 2018, after 2 a.m. and claims Jackson never asked for her ID or paperwork. Instead, Victim 2 claims Jackson was "trying to make conversation with her" all while staring at her breast and making sounds, according to court documents.

Victim 2 claims Jackson eventually asked her about her bra size while conducting a field sobriety test and propositioned her to give him oral sex in exchange for not citing or arresting her for DUI.

According to court documents, Victim 2 agreed but insisted they go to her friend's house down the road. Once there, Victim 2 ran into her friend's house and locked the door. She claims Jackson searched her car for her, used a flashlight to look into the house, and drove around in front of the home for a "few minutes." He eventually left.

According to court documents, Victim 3 was stopped by Jackson for speed and had a female passenger with her in the car. Jackson asked her to step out of her vehicle.

Victim 3 claims, according to court documents, that Jackson began making comments about her being a "pretty girl" and that he didn't "want to have to cite her for speeding."

According to court documents, Victim 3 claims the traffic stop lasted for more than an hour during which Jackson asked what she would be willing to do to get out of the citation. Court documents show Jackson asked Victim 3 to show him her breast. She declined, saying she couldn't do it in the public. Victim 3 said she was finally let go after agreeing to send Jackson nude photos of herself.

According to Victim 4, Jackson pulled her over for speeding and weaving.

He held her for at least an hour and let her go after she gave him her phone number, according to court documents.

Court documents show Victim 4 and Jackson communicated back and forth and met three times. Victim 4 claims Jackson gave her gas money and "caught her at a rough time in her life." Victim 4 said there was "no sexual or physical contact" between the two, according to court documents.

Jackson allegedly falsified information about this traffic stop also, according to the documents.

Victim 5 claims she was pulled over after doing a California rolling stop while turning west on McDowell. She described Jackson as being "casual" and "not like a normal cop."

According to court documents, Jackson held Victim 5 "over the acceptable time," and attempted to use the "same rhetorical statement" he had used with other victims. Jackson inputted false information regarding the detainment time, according to the documents.

On Nov. 24, 2018, court documents note a sixth person, labeled Witness 6, who was pulled over by Jackson near Northern Avenue and the I-17 at 3:44 p.m. in a stop where the witness thought Jackson was trying to flirt with her.

Jackson only cut the stop short because he heard a collision and sirens and had to go to it. DPS said he lied about the times of the stop and the reasons for the stop in the CAD system.

On Dec. 23, 2018, Jackson pulled over a woman in Buckeye on I-10 westbound near Verrado Way after she left her shift at Jaguars, an adult entertainment club, around 3:30 a.m.

Jackson told Victim 7 she had a warrant out for her arrest and would have the car towed but she asked if she could make other arrangements for the car because it belonged to her mother. That’s when Victim 7 alleges Jackson asked, “What are you willing to do” to avoid being arrested.

Victim 7 said she was begging Jackson not to tow her car and said she would do anything.

“I need you to convince me right now or I’m gonna arrest you,” Jackson allegedly told her.

Jackson asked if he could take her to dinner to which she said no and then said, “we’ll see where it goes, but right now I need to get home.” The stop lasted almost two hours, court docs say. Jackson asked for her Instagram and Snapchat account and made her add him on Snapchat.

Jackson was giving her car keys back and said, “you’re not going to kiss me?” To which she said no.

Jackson followed the victim almost all the way back to her residence.

On Oct. 30, 2018, court documents detail an interaction Jackson had with two women just after 4 a.m. at a Flying J gas station near 67th Avenue and the I-10 while he was working a secondary employment job, providing security for a construction zone.

Using the DPS CAD system, Jackson was running plates of cars that went by and pulled over Victim 8 and 9’s vehicle. After Victim 8 did not produce her driver’s license, Jackson made her walk to his patrol car and put her in the back seat where he asked, “what should we do?” The victim told Jackson she would not engage in any sexual acts and Jackson walked back to her vehicle and spoke to Victim 9.

Jackson spoke to Victim 9, who told Jackson she was a dancer and he began rubbing her arm, complimenting her tattoos. Victim 9, according to court documents, offered Jackson money to let Victim 8 go and he said he didn’t need money. He asked her for a dance.

Jackson led Victim 9’s hand onto his groin area. Victim 9 said she was coerced into making a deal to be released and offered her Snapchat profile to Jackson and said they could meet up if he let Victim 8 go. Victim 8 was asleep in the patrol car during Jackson’s interaction with Victim 9. Eventually, Jackson let the two go and later sent messages to Victim 9 on Snapchat, but she blocked his account.

Jackson held the two for more than 30 minutes and falsified timecodes on the DPS CAD system. 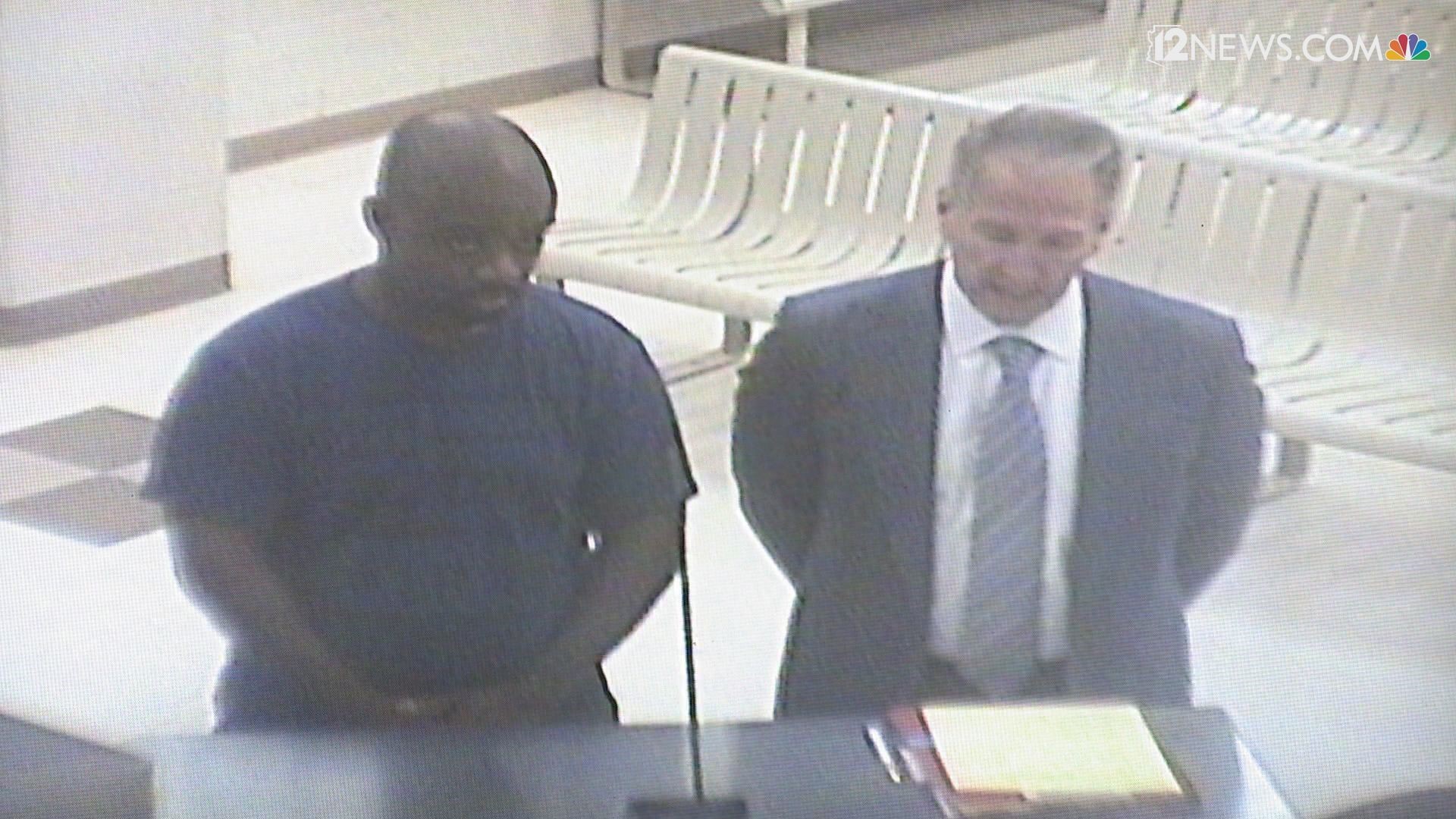