A law firm out of Minnesota released dozens of names of clergy members accused of sexual misconduct in the Diocese of Phoenix Wednesday. 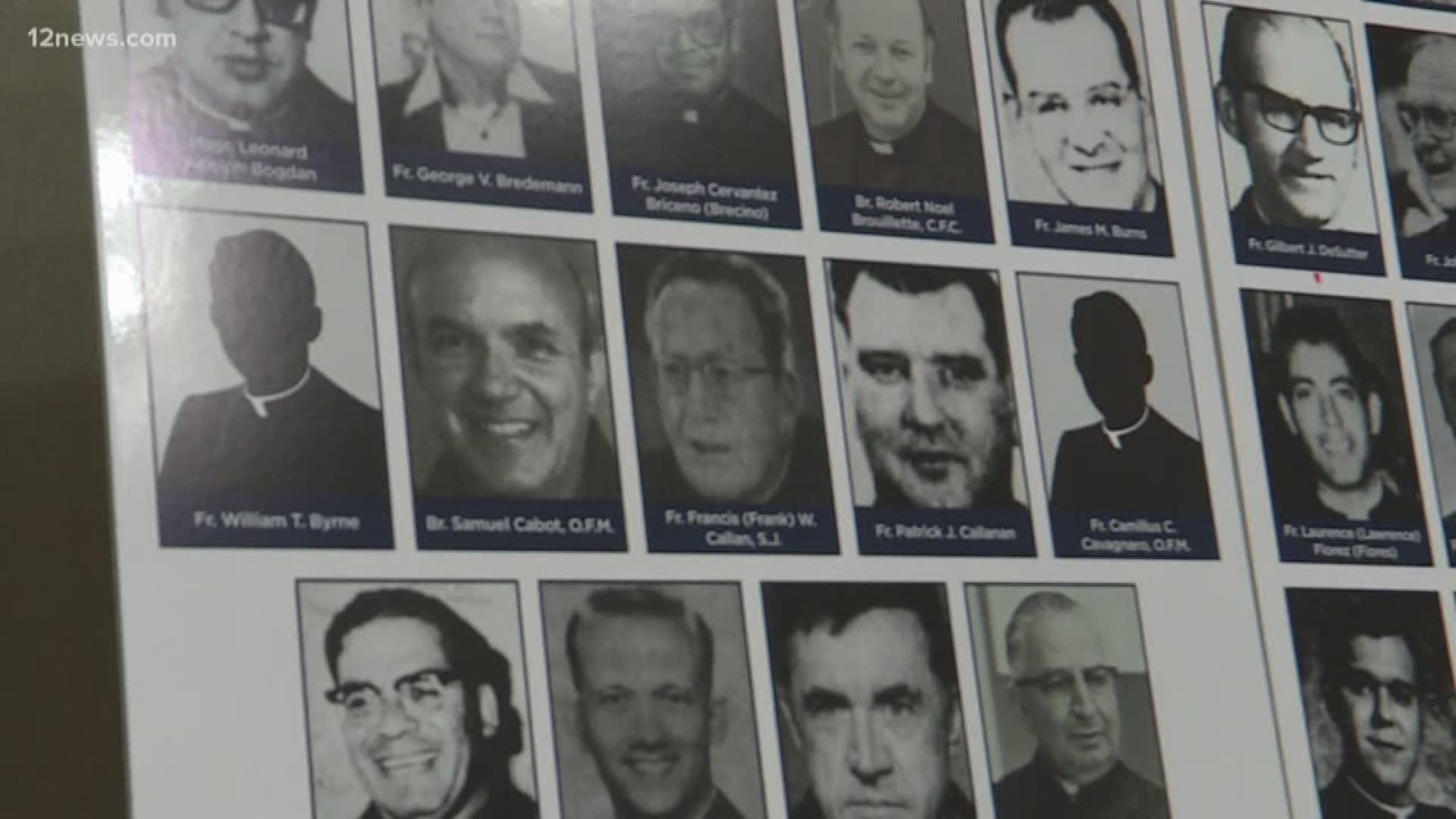 PHOENIX — A law firm out of Minnesota released dozens of names of clergy members accused of sexual misconduct in the Diocese of Phoenix Wednesday.

Jeff Anderson & Associates is a law firm known for representing victims of clergy sex abuse. The firm's report includes information like identities, histories and photographs of the accused.

In total, the firm released information on 109 clerics accused in Phoenix alongside survivors and advocates. Among the 109 identified, 62 are deceased.

The list contains 66 new names that had not been publicly disclosed by the Catholic Diocese in Phoenix.

Jeff Anderson said the firm believes the Phoenix Diocese has underreported the identities and histories of its clerics accused of sexual abuse.

He also said they knew many accused offenders were transferred in or out of the Diocese of Phoenix, allowing priests suspected of sexual abuse to go back to working with children.

In 2003, the late Bishop Thomas O'Brien entered into an immunity deal with the Maricopa County Attorney's Office after admitting he allowed Catholic priests under his supervision who were accused of sexual misconduct to be transferred to other locations.

"We still know this isn't the full truth. This is just what's available to us today. And the journey for full disclosure and the identification of offenders in the community, not just clerical offenders, remains," Anderson said.

In February, 12 News spoke with Bishop Thomas J. Olmsted, head of the Diocese of Phoenix about sex abuse in the Catholic Church.

He said he wants survivors to come forward and report what happened.

"We want them to report to civil authorities, we also want them to come forward so we can offer them healing and assistance in getting their lives back together and assisting their families too," Olmsted said. "But we also need to hold accountable those not only who abuse, but anyone who covers up the abuse."

At the news conference Wednesday afternoon where the report was released, the law firm was pressed on whether they are using this opportunity simply to get their name out.

Two sexual abuse survivors at the news conference stepped forward to say they believe in these attorneys, saying the firm has three decades of experience helping survivors and came to their aid when many other attorneys would not.

In a statement released Wednesday afternoon, the Diocese of Phoenix said the report does not contain any names of clergy who are active members of the diocese.

"We are reviewing the report released today at the press conference with survivors of sexual abuse. The report appears to contain names currently published on our website, as well as those previously published by other dioceses and religious orders. Today’s report does not identify any clergy accused of sexual abuse who are in active ministry in the Diocese of Phoenix.

The publication of information regarding any credible allegation of abuse that occurred prior to Dec. 2, 1969 — prior to the existence of the Diocese of Phoenix — is coordinated by the diocese in which the abuse occurred. The Diocese of Phoenix website contains clearly identified, direct links to the public notifications made by those dioceses.

This information, initially published by the Diocese of Phoenix in 2012, may be found here: https://dphx.org/youth-protection/community-notification-statements

The Diocese of Phoenix encourages anyone who has been a victim of abuse to contact local law enforcement. For additional information about support services for those who have been abused, please contact the Office of Child and Youth Protection at (602) 354-2396.

We stand united with the community, particularly with children and vulnerable adults, in praying and working for an end to the tragedy of sexual abuse."

A law now passed in Arizona creates a window for survivors who previously didn't have the chance to file a civil suit to file one. Bridie Farrell, a former world-class speed skater who says she was molested repeatedly by a 33-year-old Olympic silver medalist when she was 15, advocated for the law to be passed.

"When we say when we encourage people to come forward and speak, as a survivor of sexual abuse, I want to be the first to say to anyone watching this, we are not asking you to come stand before a microphone and that many, many civil suits are filed underneath Jane or John Doe," Farrell said.