There’s been a 95% increase in gun sales compared to this time last year and a 139% increase for ammunition. 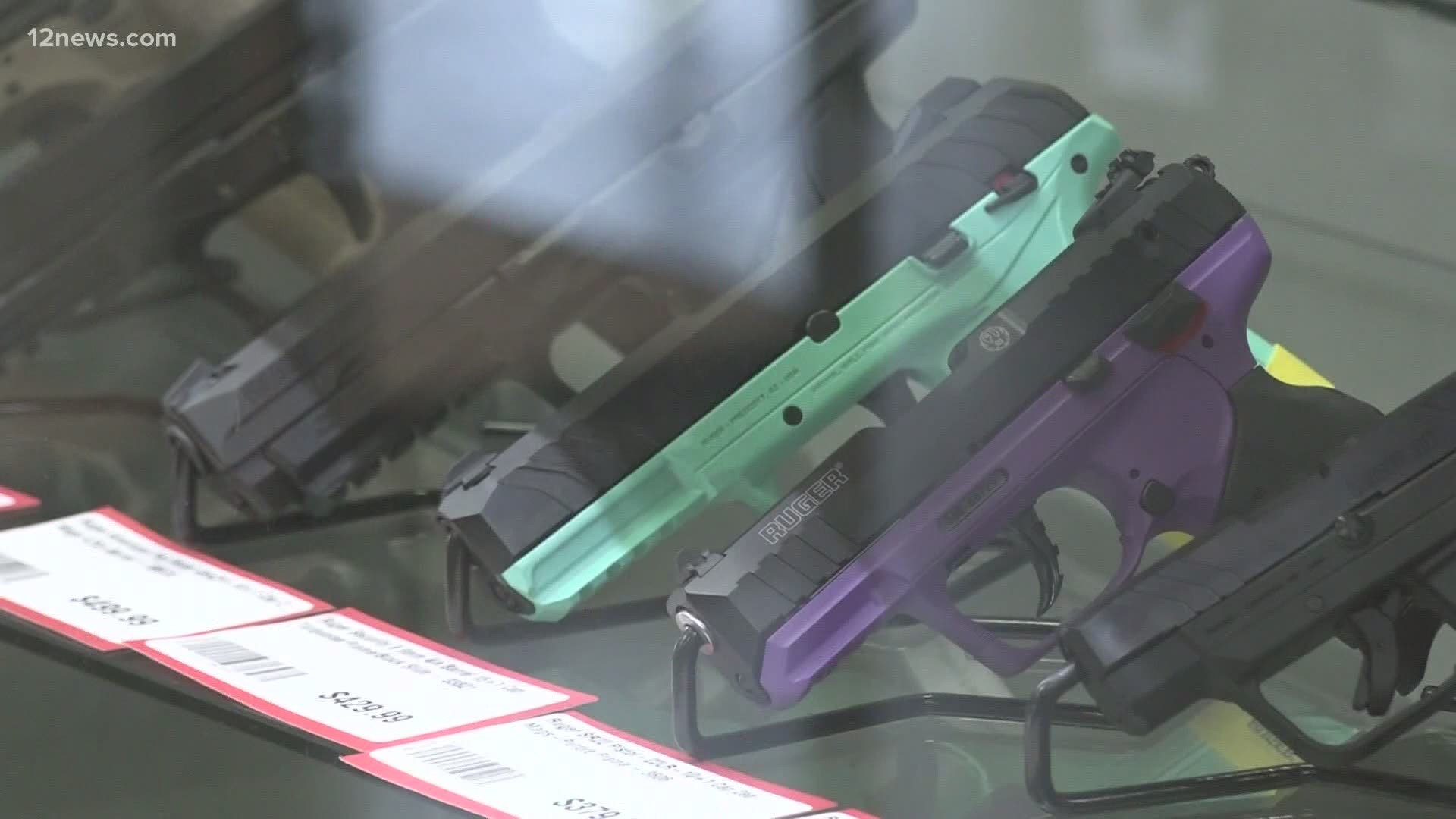 PHOENIX — Both gun and ammunition sales have skyrocketed this year.

According to the FBI, there have been more than 25,934,334 background checks through August, which provides a window into gun sales this year.

Experts say historically there is an uptick during an election year.

According to the National Shooting Sports Foundation, there’s been a 95% increase in gun sales compared to this time last year and a 139% increase for ammunition.

"Estimates and concluded that nearly 5 million Americans purchased a firearm for the very first time in 2020." Surveyed retailers reported that 40 percent of sales involved first-time buyers. "NSSF-adjusted NICS checks for January through July 2020 is a record 12.1 million, which is up 71.7 percent from the 7.1 million NSSF-adjusted NICS January through July 2019. This equates to nearly 5 million first-time gun owners in the first seven months of 2020."

Gun Shop owner Mark Healy of Healy's Firearms in Tempe has seen an uptick in both firearms and ammunition. “March 17th is when it kicked off,” said Healy. “People started to realize there was going to be a run on guns and ammunition.”

Firearms expert Jerry McGowen says politics during an election year often motivate buyers, with many Democrats traditionally favoring tighter restrictions on guns while Republicans historically to see restrictions as an infringement on the right to bear arms. “People that have never thought about buying a gun before going into the stores and buying a firearm,” said McGowen.

Democratic Presidential nominee Joe Biden has laid out a plan to end gun violence in America.

- Hold gun manufacturers accountable. In 2005, then-Senator Biden voted against the Protection of Lawful Commerce in Arms Act, but gun manufacturers successfully lobbied Congress to secure its passage. This law protects these manufacturers from being held civilly liable for their products – protection granted to no other industry. Biden will prioritize repealing this protection.

- Get weapons of war off our streets. The bans on assault weapons and high-capacity magazines that Biden, along with Senator Feinstein, secured in 1994 reduced the lethality of mass shootings. But, in order to secure the passage of the bans, they had to agree to a 10-year sunset provision and when the time came, the Bush Administration failed to extend them. As president, Biden will:

- Keep guns out of dangerous hands. The federal background check system (the National Instant Criminal Background Check System) is one of the best tools we have to prevent gun violence, but it’s only effective when it’s used. Biden will enact universal background check legislation and close other loopholes that allow people who should be prohibited from purchasing firearms from making those purchases. Specifically, he will:

- Create an effective program to ensure individuals who become prohibited from possessing firearms to relinquish their weapons. Federal law defines categories of individuals who are prohibited from purchasing or possessing firearms, and the federal background check system is an effective tool for ensuring prohibited persons cannot purchase firearms. But we lack any serious tool to ensure that when someone becomes newly prohibited – for example because they commit a violent crime – they relinquish possession of their firearms. There are some promising models for how this could be enforced. For example, California has a mandatory process for ensuring relinquishment by any individual newly subject to a domestic violence restraining order. As president, Biden will direct the FBI and ATF to outline a model relinquishment process, enact any necessary legislation to ensure relinquishment when individuals newly fall under one of the federal prohibitions, and then provide technical and financial assistance to state and local governments to establish effective relinquishment processes on their own.

- Incentivize state “extreme risk” laws. Extreme risk laws, also called “red flag” laws, enable family members or law enforcement officials to temporarily remove an individual’s access to firearms when that individual is in crisis and poses a danger to themselves or others. Biden will incentivize the adoption of these laws by giving states funds to implement them. And, he’ll direct the U.S. Department of Justice to issue best practices and offer technical assistance to states interested in enacting an extreme risk law.

- Give states incentives to set up gun licensing programs. Biden will enact legislation to give states and local governments grants to require individuals to obtain a license prior to purchasing a gun.

President Trump has continually attacked the Democratic gun-control platform. In April while discussing the Covid-19 pandemic, took aim at Virginia gun laws. "They want to take their guns away. Okay? They want to take their guns away. That's the Second Amendment. That's Virginia. You have a governor who really -- I guess he should be under siege; he seems not to be. If he were a Republican, he'd be under siege,” said Trump.

But now the pandemic and social unrest are also factors and Healy agrees Covid-19 and social injustice have contributed to gun and ammunition sales.

However, both Healy and McGowen caution against the public panicking and say new gun owners should also receive training when handling a firearm.