There have been no reports of extensive injuries or deaths, according to Tempe Mayor Corey Woods. 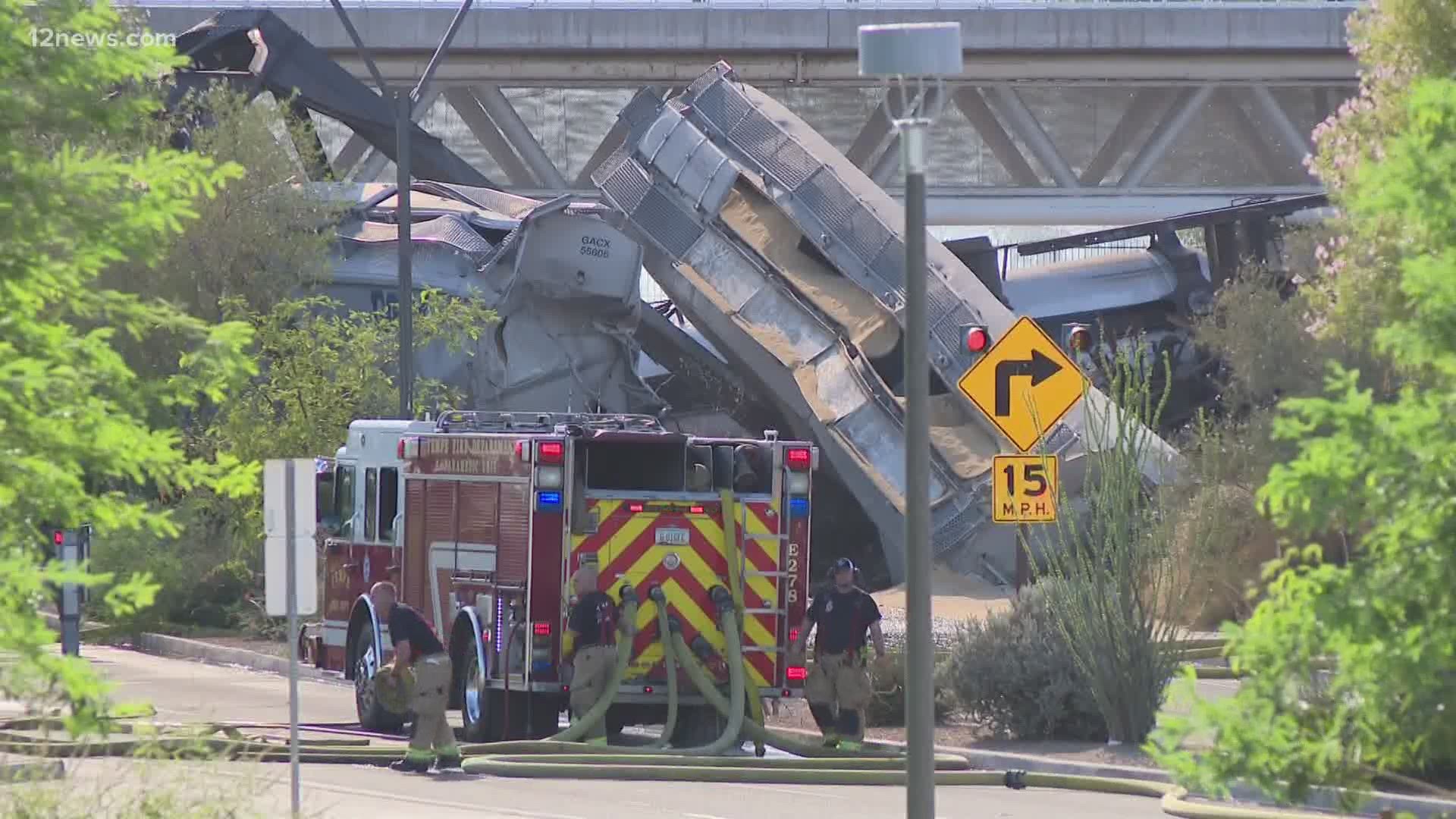 Heavy smoke was seen over Tempe Town Lake by Sky 12.

Authorities got calls of a derailed train and fire on the Tempe Town Lake bridge just after 6 a.m. It was later discovered the bridge had partially collapsed.

It was not immediately known what caused either the derailment or the fire.

One person was treated on scene for smoke inhalation, but no one in the train crew was injured, according to Union Pacific.

Newly-elected Tempe Mayor Corey Woods noted that there were no major injuries or deaths.

The train was hauling 95 cars and eight to 10 train of them were involved. The cars consisted of a mix of freight and tank cars.

Three tank cars were on the ground under the bridge with two of them containing cyclohexanone, a flammable liquid, and one contained a rubber material.

Firefighters say one of the cars containing cyclohexane is leaking into a dry bed and not the river. No tank cars were involved in the fire. Crews were able to stop the leak and remove the debris.

Authorities say while any smoke is hazardous, they haven't seen any reason to believe there is an extra threat to the surrounding area. 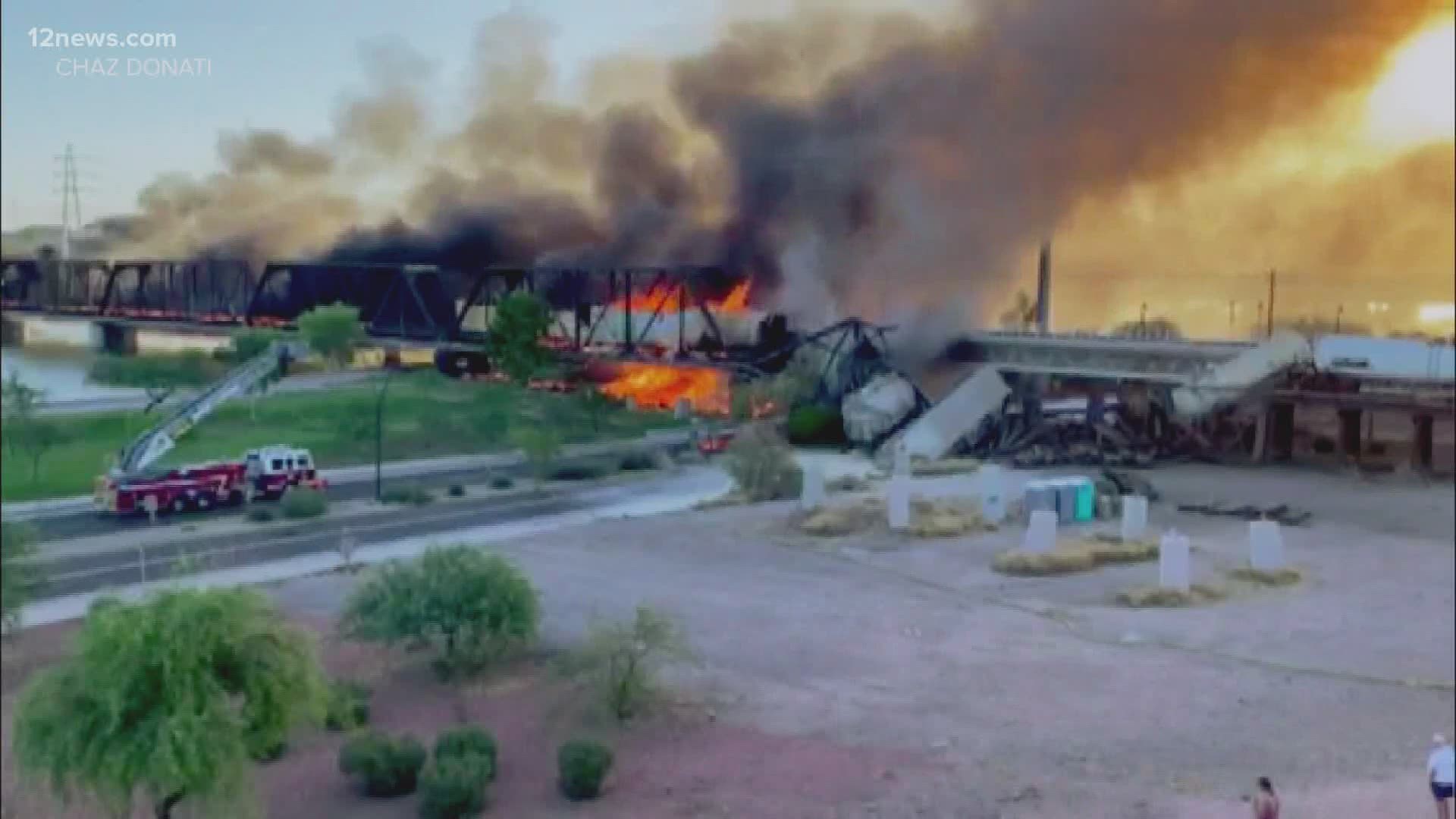 RELATED: Tempe Town Lake bridge had a long history in the Valley

Union Pacific spokesman Tim McMahan said the south side of the bridge collapsed and rail cars fell into an empty park below.

McMahan said the bridge was last inspected on July 9.

Brandon Siebert, the Tempe Fire inspector, said it was possible that the train derailment led to the partial bridge collapse, but that remains under investigation.

Our vantage point of the train derailment on a bridge over Tempe Town Lake. Multiple fire departments from around Valley trying to get a handle on the blaze as it burns over the water. Tempe Fire says no injuries reported. #12News pic.twitter.com/DM2WAR6xbU

The collapse occurred over land, Siebert added. It was just feet from the Tempe Beach Park corridor.

The train was hauling wood, as seen by Sky 12. That wood then caught on fire. Lumber also fell from the bridge and was burning on the road below. 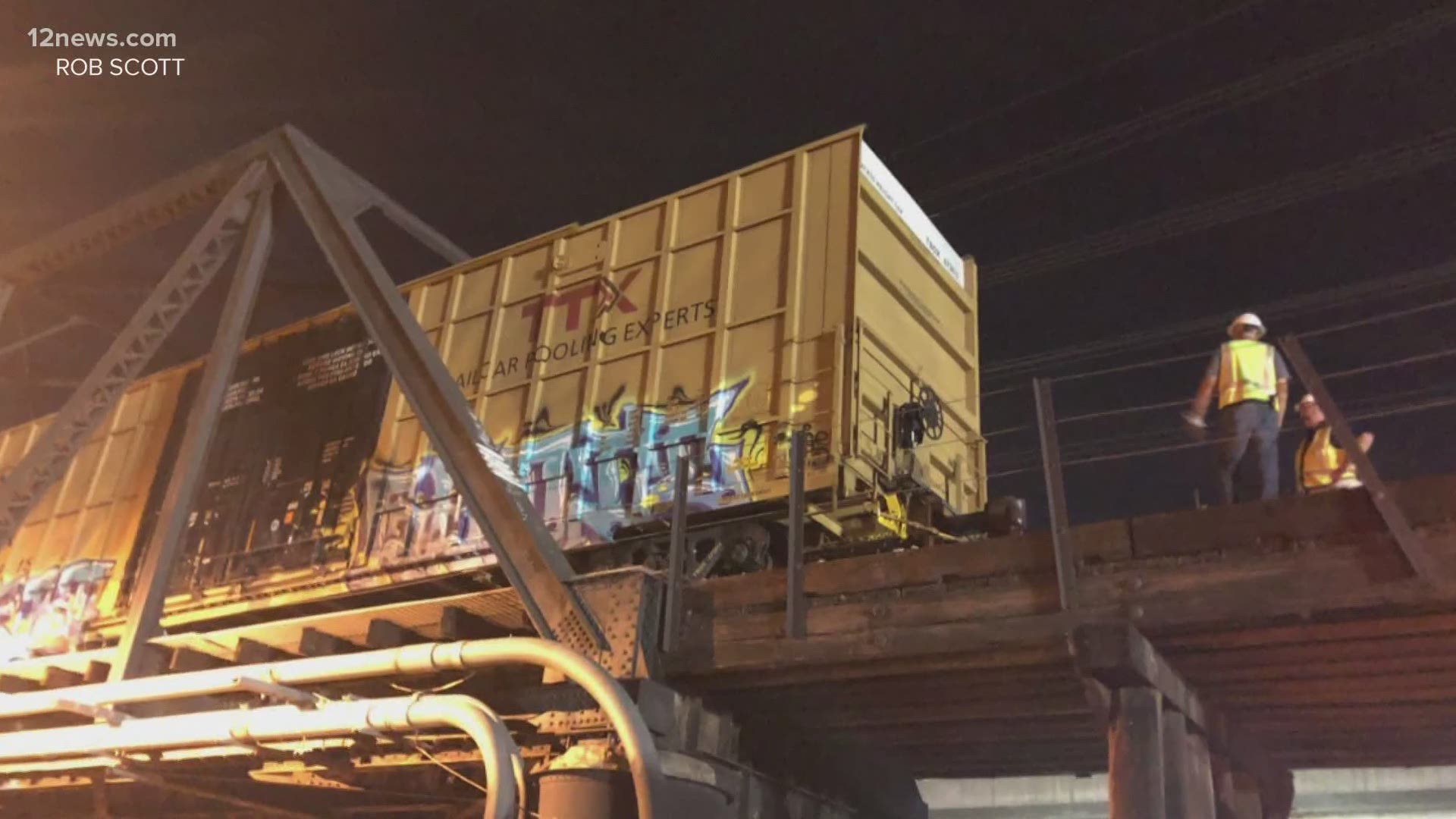 It's not the first time a train derailed at the bridge this year. According to Union Pacific, a train carrying 12 cars derailed on June 26.

Officials with Union Pacific say the bridge and railway were inspected for safety.

Tempe Center for the Arts was evacuated. There were a few people inside but they were sent home. Authorities vacated the area as a precaution.

Operations at Sky Harbor were not impacted.

People were asked to avoid the area until further notice.

Fire crews from around the Valley assisted in putting out the blaze. Crews called in a fourth alarm and even a fireboat from the Peoria Fire Department to assist.

Tempe Police Chief Sylvia Moir said clean up will be "a multiday, possibly a multiweek operation."

Moir also called in the FBI to assist with the investigation, but there is no initial indication to believe the derailment was criminal in nature.

The National Transportation Safety Board is also investigating.