Digital Detox: What happens when families swear off electronics for 24 hours?

We challenged two families to go without their electronic devices for 24 hours. Could they do it? 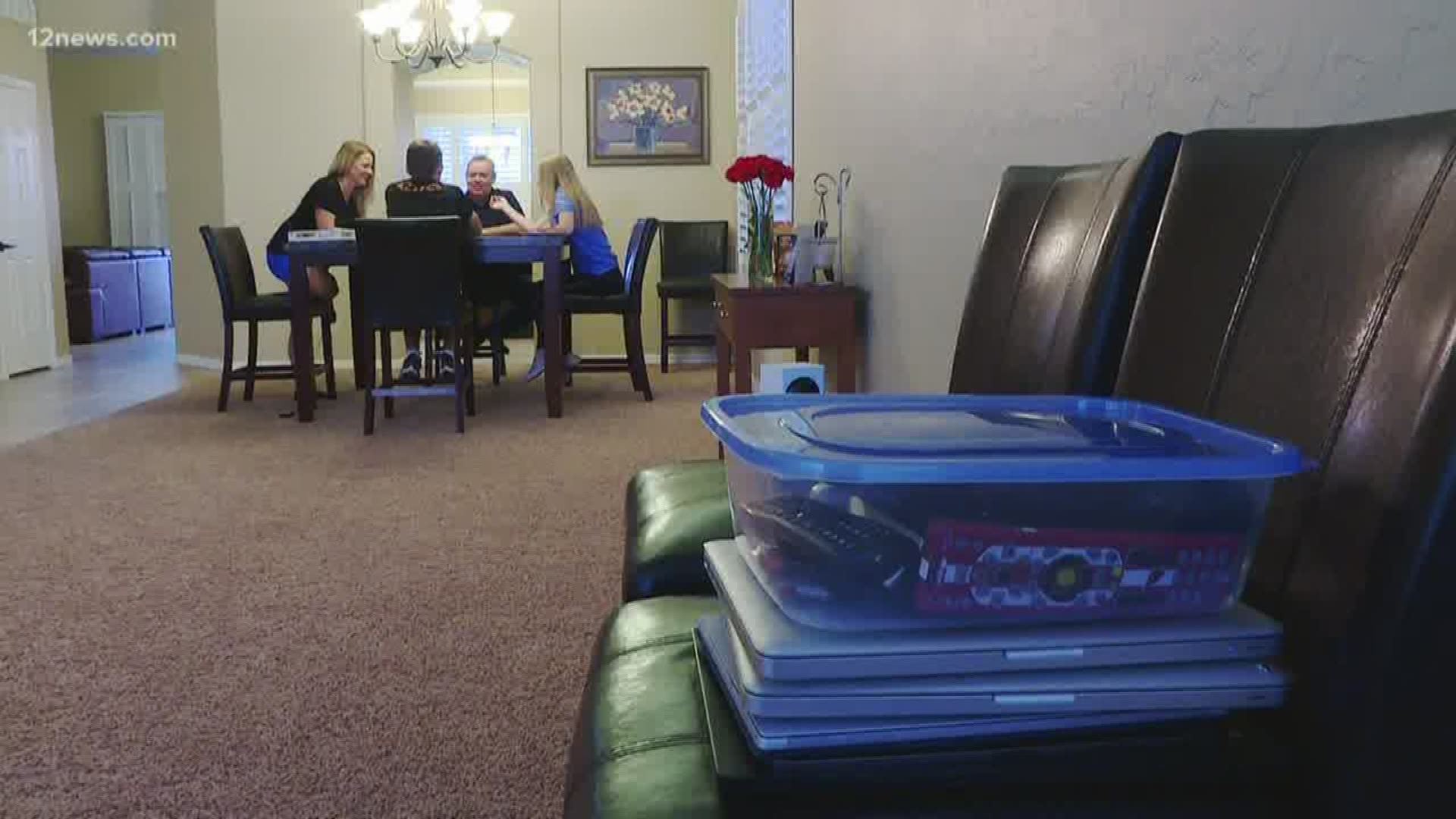 PHOENIX — We love our phones.

Face it, you're probably reading this on one right now.

According to the Pew Research Center, we spend four hours every day on our phones: Social media, YouTube, videos, photos, Instagram—oh, and they make phone calls too.

They keep us connected to everything, but they can also be a little too consuming.

So what happens when we ask a family to give it all up for 24 hours?

This is Damian Nichols. Damian, his twins—both high school seniors—and his wife were asked to give up all their devices for 24 hours.

In order to make sure they were following the rules, we wired their house with security cameras—and confiscated everything.

"This is where their entire digital lives are going in the box.”

“One phone, two phones… Do we have tablets ... here too? Do you want to see goodbye? OK and the watch… Anybody else?”

Everything went into the box—even their Kindle.

“That’s a lot of stuff… It is a lot of stuff. Did you know you had that much technology? It’s kind of scary to think we have to be without that for a whole day.”

Not only did we set up security camera, those cameras were also on a motion sensor in case anyone tried to be sneaky.

“You guys know the rules. There’s no TV, there’s no phones, there’s no internet. There's no technology in any kind.”

But in order to put the family to the ultimate test, we gave them some challenges.

One of those challenges? Make dinner and eat together.

It seems pretty simple on its face, but the family soon runs into some problems, including not being able to look up recipes on their phones.

Another problem? "I’m bored." "It’s been like two minutes!”

“Out of the four of you, who needs this detox the most? 'I’m fine.' That’s what all addicts say! 'I’m fine—I don’t have a problem, you have a problem.'”

Damian works for the Kyrene School District, and his family says the phone is constantly ringing—dealing with district emergencies, late-night calls.

And for his kids, losing the phone is like losing part of their brain.

"What are we going to do? Let’s go to a movie. I’m like, 'Oh, you can’t even look up movie times anymore or look up the phone number to call the movie theater."

“This is awkward. I wonder what’s happening in the world. I don’t know. Well, the weather is hot…”

We left the Nichols family to the rest of their night—except Damian didn’t even last an hour.

“He lost his mind! He went crazy. He got bored very fast. Yeah, after an hour he definitely looked in the box.”

The security camera kept going off as Damian came back again—and again—trying to get a look at his phone.

But he wasn't alone: As the hours wore on, the rest of the family came looking too.

The Nichols family ran into some other challenges, including how to wake up in the morning.

“We don’t have an alarm clock, so we had to dig an old out of the closet and figure out how to set it.”

And when they woke up, we had another challenge for them: Play a board or card game.

“I don’t remember how to play this game… I want yellow!" 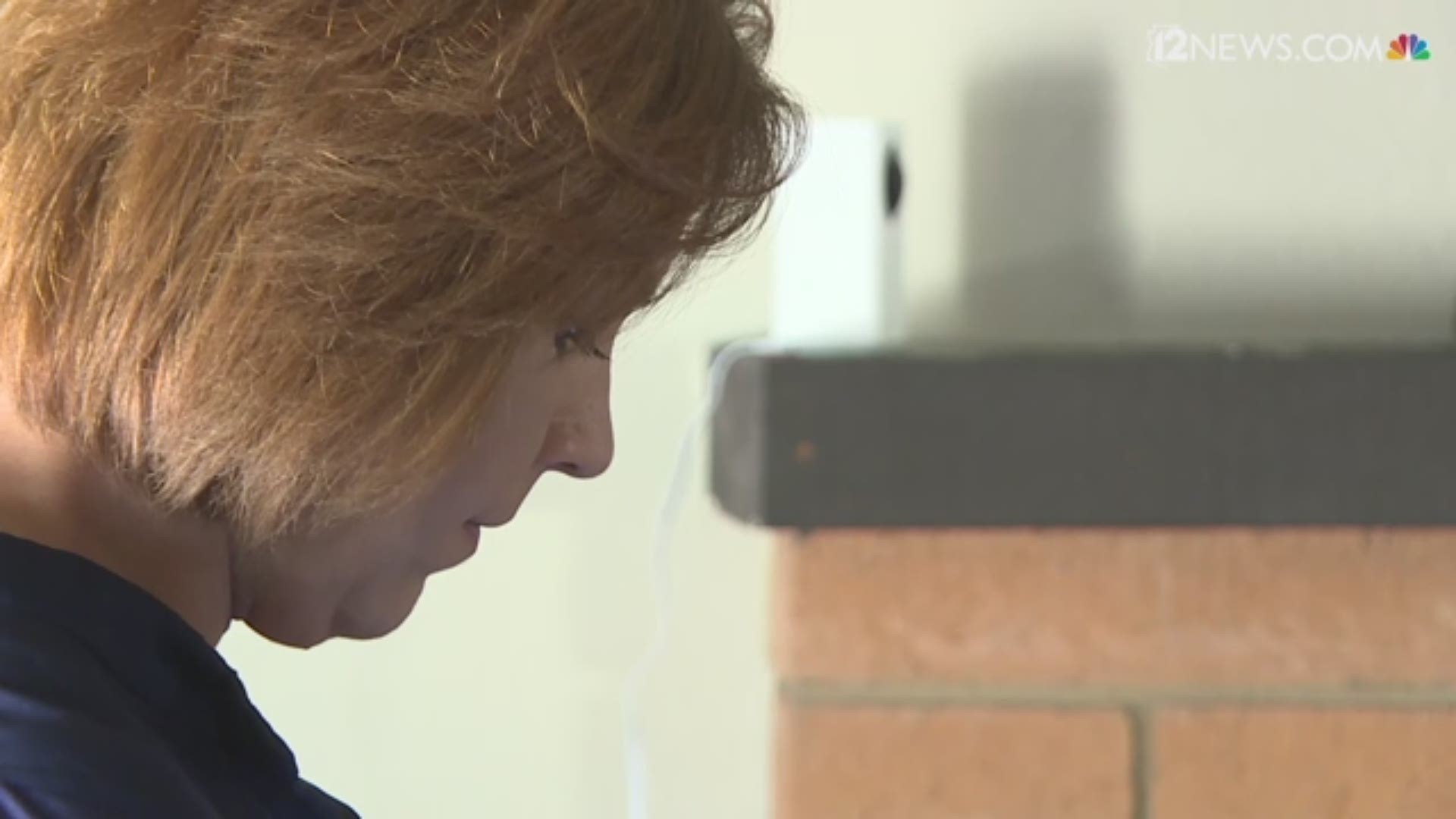 Damian and his wife said they spent a lot of the night "sitting around, staring at nothing" while the kids were out at a football game.

"We couldn't track what they were doing."

"That was probably the toughest part, when we went out and had a couple drinks and came home early and laid in bed and just wondered when they were coming home.”

They usually know where the kids are by tracking their phone—but not that night.

The kids also ran into some annoyances being phone-free with their friends.

“My friends disappeared for a minute because I went somewhere else and I couldn’t call them and figure out where they went, so that was annoying.”

The rest of the day, the Nichols family killed time with a track meet and work, but also a lot of downtime—and even more nap time.

“It was just so boring. We realized how much we—even when the TV is on in the background or your phone might not be on all the time. but you look at it every 10 to 20 seconds.”

But 24 hours after we started, the detox was almost over. The family shared the hardest part of giving up their devices.

“At the cross country meet this morning, I was sitting there with nothing to do the whole time, listen to, nothing to play with. He can’t tell you how he did because the time.”

“Not being able to track them, not knowing where they’re at, emergency contact safety of it.”

“Not being able to text my friends or FaceTime them and also not knowing my schedule because I use the Calendar app so much in a day.”

“For me, it was just being able to communicate with the rest of the family. I don’t think I realize how often we actually communicate via text.”

24 hours later—and a lot of talking and downtime —are they glad they agreed to do it?

“No. It was quite an experiment, I’m glad we did it, I don’t know that we would do it again.”