A manager at a Del Taco reportedly at 91st Avenue and Peoria has been fired after a profanity-laced exchange he had with a couple at a drive-thru went viral. 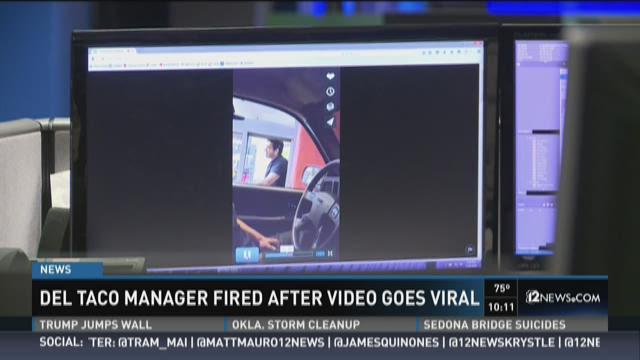 A manager at a Del Taco restaurant at 91st Avenue and Peoria has been fired after a profanity-laced exchange he had with a couple at a drive-thru went viral.

The couple apparently returned to the drive-thru after not getting sauce packets and the manager was belligerent, so the woman in the vehicle started recording the interaction on her cellphone.

The video was posted to Vimeo on Wednesday. Customers who saw the video were outraged.

"I've never seen anything like that before," Del Taco customer Jeremy Johnson said. "I work fast food, I've never cussed or yelled at a customer like that."

"I'm outraged that anyone would treat another human being so poorly, it's not right," Jenny Erickson said.

In the two-minute and 55-second clip titled, "Confrontation between Del Taco drive thru and customers who didn’t get their sauce" the conflict between the customers and the manager can be seen clearly.

WARNING: The language in the video below is explicit and not suitable for all viewers.

Confrontation between Del Taco drive thru and customers who didn't get their sauce from Kobe D on Vimeo.

At one point, the woman tells him, "But, you don't have to act that way."

"you're going to get fired," she tells him.

"This is the manager right here," the man in the truck says as he points to the worker.

"To your boss, duh," the woman responds.

"I am the boss," the manager responds. "My dad's actually a [expletive] owner, so good luck with that."

"Ok, well, you know we can close you down?" the woman asks him. "You know that, right?"

"I never came here. This is my first time."

The interaction continues until the couple eventually drives off.

"We strive to provide a positive guest experience at all of our restaurants and were appalled by this behavior as it is not representative of our high guest service standards. We took this incident very seriously and addressed it with the location’s franchisee, who took definitive action by terminating the employee immediately.”- Del Taco Restaurants, Inc.