The Phoenix Law Enforcement Association (PLEA) characterizes the call to defund the police as divisive within the community. 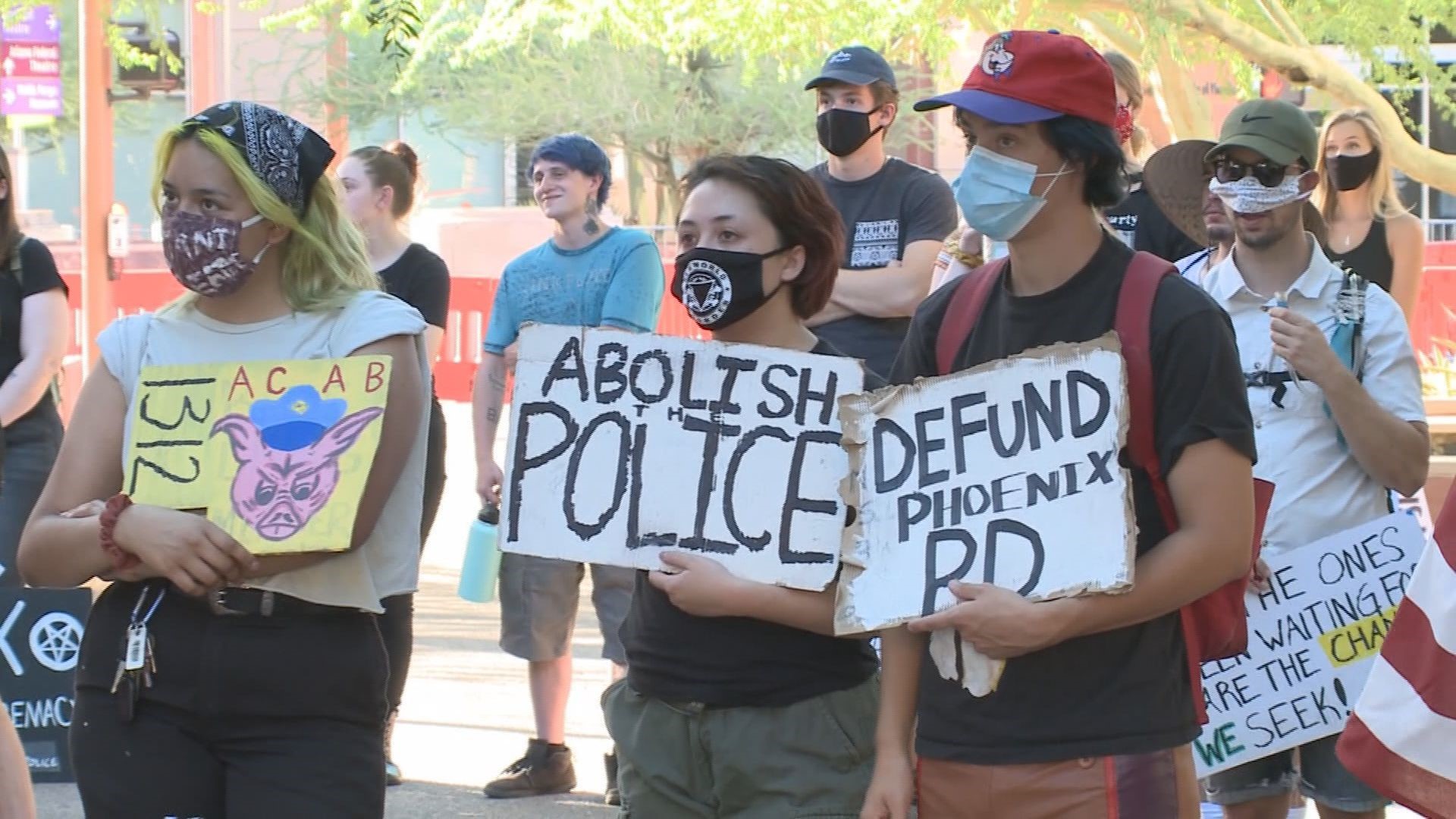 PHOENIX — There's been a lot of debate in recent weeks over what protesters and activists mean when they call for the defunding of police. Some say it's a radical call to get rid of police departments entirely, while some say it simply means reducing the amount of money spent on police forces and reallocating the funds to social services.

For two Valley groups, Young Democratic Socialists of America (YDSA) ASU and Black Lives Matter (BLM) Phoenix Metro, the phrase "defund the police" is meant to encompass both of those stances. Both groups feel that eventually police departments should be abolished and the first step towards abolition is to divert funds away from police.

Recent calls for defunding the police began after the high-profile deaths of George Floyd in Minneapolis, Dion Johnson in Phoenix, Breonna Taylor in Louisville and the death of Rayshard Brooks in Atlanta. All four are among a long list of names of Black Americans that have died as a result of deadly force by police officers.

Both groups object to the violent tactics police have used in the killings of Black civilians and believe that the violence is a result of deeply entrenched racism in police departments across the country and here in the Valley.

"We see police in the light, in the legacy of slavery and the role that they play within the capitalist society. Basically, keeping populations in line in order to protect property and the wealthy few," Cooper said.

YDSA ASU and BLM Metro Phoenix both say funds that would go towards police departments should be diverted into social services and community programs.

The Phoenix Law Enforcement Association (PLEA) objects to the calls for defunding. The association spoke out against the "defund the police" movement at a press conference on Friday, June 12.

"This is just wrong. Phoenix is not Minnesota, we are not Minneapolis. That incident (referring to the death of George Floyd) occurred 1,200 miles away. You can't blame everyone for that incident," Michael London, the current president of PLEA, said.

London characterized the calls for defunding as divisive and says that it creates more "distrust within our community and it needs to stop."

During PLEA's news conference, groups like YDSA ASU and BLM Phoenix Metro were invited to talk with the association.

"We recognize that change begins with understanding," London said. "I invite our critics to meet with us and we can discuss these issues, share these facts and trade information. We feel this is the first step to making our community relationship stronger and becoming productive."

For their part, YDSA ASU and BLM Phoenix Metro, acknowledge that the abolition of police won't come overnight and are in the fight for the long-haul.

"I'm not going to fool myself and say that we are ready as a society in this country to quit police tomorrow but I definitely feel the urgency of our brothers and sisters out here who have to watch extrajudicial executions of their loved ones on T.V. That urgency didn't come out of thin air, that urgency was earned by the American cop," Williams said. 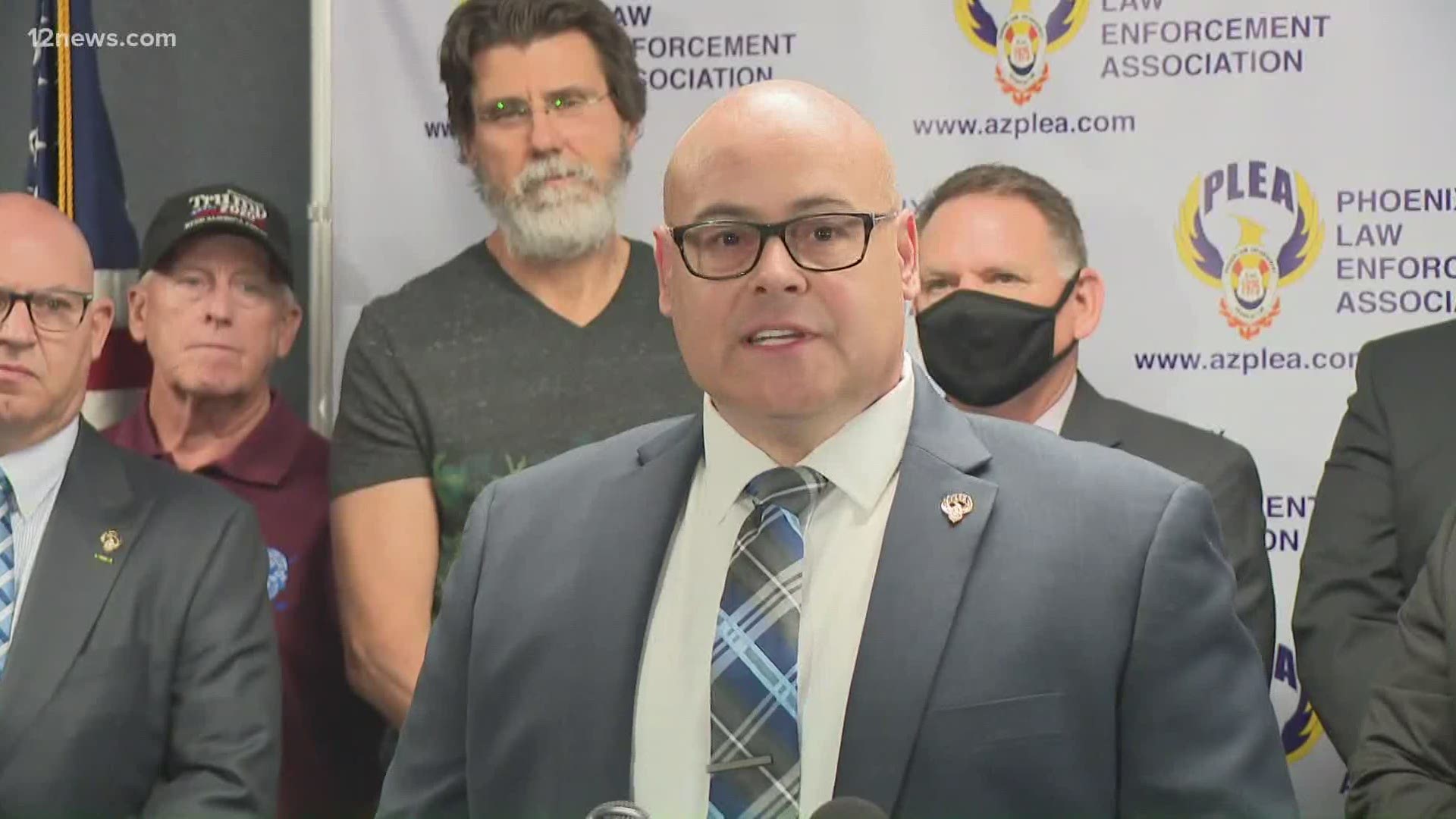 RELATED: When protesters cry 'defund the police,' what does it mean?